The landslide election of Andres Manuel Lopez Obrador is less an endorsement of policies as a repudiation of decades of violence and corruption.

Following a global trend against the status quo, Mexicans have overwhelmingly voted in favour of a populist as their new president. The election of former Mexico City mayor, leftist Andrés Manuel López Obrador, with 53% of vote in a five cornered contest, represents an overwhelming rejection of Mexico’s slide into profound violence and corruption.

In 2017, under outgoing President Enrique Peña Nieto of the Institutional Revolutionary Party (PRI), Mexico’s murder rate soared past 29,000, with more than 200,000 killed over the past decade. More than 130 political candidates were murdered during the nation-wide elections.

Mexico’s out of control crime rate has been driven by the country being in the grip of organised crime syndicates. Added to endemic violence and corruption, incomes for many Mexicans have also fallen rather than risen under the North American Free Trade Agreement. López Obrador has promised to boost low incomes by tackling corruption and redirecting lost money back into the economy.

As many Mexicans noted, what they were voting for was hope rather than a concrete plan for political, legal or economic change. This was matched by López Obrador’s lack of policy detail about how he would fulfill his election pledges.

The overwhelming vote for López Obrador also marked a complete repudiation of the PRI, which had ruled Mexico from its foundation in 1929 until 2000, and from 2012 when it wrested political control back from National Action Party. Despite its name, the PRI has been a centre-right party since the 1980s.

During the presidential campaign, López Obrador was painted by his opponents as being a Mexican version of Venezuala’s late leftist-populist president Hugo Chavez. His election does not, however, promise to restore Mexico to its once socialist path, given he has to satisfy a grab-bag of centrist and conservative interests that also supported his bid for the presidency.

López Obrador will also have to manage Mexico’s prickly relationship with the United States and its mercurial president, Donald Trump. Retaining US manufacturing investment in Mexico will be high on López Obrador’s agenda if he is to have any hope shoring up Mexico’s sliding economy. President Trump came to office promising to build a wall between Mexico and the United States and have Mexico pay for that wall. López Obrador is at least as unlikely to concede to President Trump’s demand as was his predecessor, despite acknowledging Mexico being effectively held hostage by its drug cartels.

Mexico’s eight drug cartels are overwhelmingly responsible for the country’s spectacular murder and corruption epidemic, and effectively controlling about 70% of the country. The options for local officials are in most cases to cooperate with the drug cartels and be compromised by corruption or be murdered. Most choose the former.

For the moment, however, the Mexican people believe that the future might be brighter rather than increasingly bleak. But as with other populists, López Obrador’s capacity to live up to probably unrealistically high expectations may, in the end, also be his undoing.

Damien Kingsbury is professor of international politics at Deakin University.

Blood on the Mexican border squeezed by opportunistic GOP 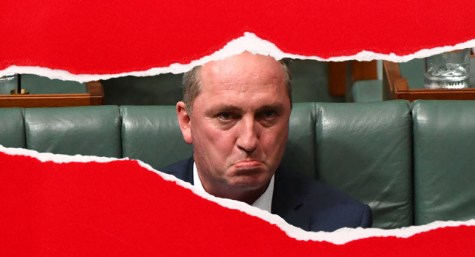 70% cartel control tells the story. I wish the people of Mexico well in this.

Hasn’t the fax from Langley VA run out of ink yet? Not to worry, just recycle old commentary, same-same.