The Federal Government Press Gallery has lashed out at a decision by the Nauruan government to block ABC journalists from attending the Pacific Islands Forum.

ABC journalists blocked from Nauru, journalists try to sort the trolls from the people who will actually try to murder them, Domain gets a Google head, and other media tidbits of the day.

Nauru bans ABC. The Nauruan government has blocked the ABC from attending the Pacific Islands Forum, which Prime Minister Malcolm Turnbull will be attending. In a statement from the Nauruan Government yesterday, it said no journalists from the ABC would be granted a visa, “under any circumstances, due to this organisation’s blatant interference in Nauru’s domestic politics prior to the 2016 election, harassment of and lack of respect towards our President in Australia, false and defamatory allegations against members of our Government, and continued biased and false reporting about our country.”

The Federal Government Press Gallery committee called the ban “outrageous” in a statement. The Press Gallery had been allowed a pool of three reporters, and the ABC had offered to take one of those places. “It did so in a way that assists all Australian media organisations, given most could not be part of the unusually small pool,” it said.

The ABC’s news director Gaven Morris said the ABC wouldn’t vacate its position in the pool. “The Nauruan Government should not be allowed to dictate who fills the positions in an Australian media pool,” he said. “It can hardly claim it is ‘welcoming the media’ if it dictates who that media will be and bans Australia’s public broadcaster.”

Everyday hate mail. Following the Annapolis newspaper shooting, journalists around the world have been talking about how to tell the difference between trolling and genuine threats. As more details emerge about the shooter, who killed five newspaper employees, more of his threats against the paper have emerged. In response, Huff Post has posted just some of the hate mail its received, writing:

Up until the moment on Thursday he allegedly murdered five Capital Gazette employees, Jarrod W. Ramos was in many ways a kind of media consumer known to every journalist in America … Showing up to work the next day requires people to convince themselves that none of this stuff is truly serious, that the guy on the voicemail didn’t really mean it … This particular occupational illusion was shattered on Thursday, which maybe explains why there was little comfort to be found in the news that Ramos was allegedly acting on a specific vendetta against the Maryland newspaper. Maybe journalists aren’t safe after all, they were left to wonder. Maybe one of the threats in their inboxes is real.

The revolving door. Domain has announced its new managing director and CEO. Google’s Jason Pellegrino will fill the position left by Antony Catalano’s sudden departure in January. Pellegrino has been managing director of Google for Australia and New Zealand and will move across to Domain in August.

Front page of the day. The NT News isn’t ready to let go of its Walkley-winning “Why I stuck a cracker up my clacker” headline, with another variation today: 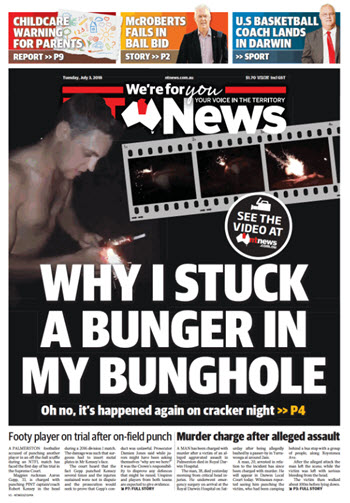 Glenn Dyer’s TV Ratings. Seven won the main channels and total people thanks to a solid night for the news (1.77 million from 6-6.30pm) and House Rules (1.399 million). But it didn’t win the main demos — that honour was Ten’s thanks to MasterChef with 1.13 million followed by Have You Been Paying Attention with 1.06 million. That meant more than a million viewers nationally for two hours of prime time for Ten. The ABC ran second with Four Corners averaging 957,000 nationally and Media Watch 885,000, easily in front of Nine’s hour of The Big Bang Theory (644,000 average from 8.45pm) and Seven’s First Dates Australia (707,000 nationally).