David Leyonhjelm's smearing of Sarah Hanson-Young was no accident: it was the business model of cultivating old white males in action.

The worst mistake you can make about Sky News and David Leyonhjelm’s smear of Sarah Hanson-Young is to think it was some sort of inadvertent “line crossing”, that a boundary had been overstepped in a robust exchange of ideas. Both Leyonhjelm and Sky News are in the same business, of selling the status of victimhood to aggrieved elites, and dressing it up as ideology to disguise the naked self-interest that motivates it.

Leyonhjelm has a long history of smearing people in the vilest terms, often using violent imagery. John Howard “deserved to be shot” for his gun laws. Police “can lie on the side of the road and bleed to death”, he said. That he engaged in an attempt to slutshame Sarah Hanson-Young, peddling lies about her sexual history, both on the floor of the Senate and on television, shouldn’t surprise. Nor should the ready enabling of Leyonhjelm by purported “outsiders” Rowan Dean and Ross Cameron; Dean, a painfully unfunny far-right “humorist” employed by Fairfax; Cameron a failed right-wing politician best-known for his extra-marital affairs and homophobic abuse.

All three have the same business model: exploit the resentment of old white males who are desperate to be told they are victims despite the privilege that still attaches to being white, male, heterosexual and able-bodied. Their aim is to harvest the rage of men who are furious that their privilege has been diminished by 5-10% and no longer automatically receive the obeisance to which they believe they are entitled. Their targets are everyone they believe threatens them: women, LGBTI people, Indigenous Australians, “millennials” (i.e. anyone under 40), Muslims, Australians from non-Anglo backgrounds, people who believe in science. And the point is always to kick down, because when you’re an old white male there are precious few targets for you to kick up at.

Perhaps aware that too blatant a championing of racist, misogynist, bigoted self-interest might interfere with the business model, all of them cloak it in ideological pretension. None want to suffer the fate of Mark Latham, who failed to sufficiently disguise his deep-seated loathing of various social groups and was booted repeatedly from media outlets until he was reduced to frothing at the mouth on Twitter and falling off stages.

The Dean and Cameron (and, originally, Latham) shtick is to portray themselves as victims just like the audience they want to exploit — portraying themselves as “outsiders”, simultaneously excluded by a ruling elite and deriving insight from that exclusion, offering a truth no one else dares utter. That this is delivered by a former MP (originally, two former MPs) and an employee of a major newspaper, on an outlet owned by the world’s most powerful media mogul, hilariously belies their self-described status. The only thing that’s “outsider” about Dean and Cameron is that hardly anyone watches them — they draw the standard Sky News demographic of old males but in such low numbers that they may as well be on Youtube with their erstwhile colleague Latham, exiles in their own old white male land.

Leyonhjelm has some greater security of tenure, having survived Malcolm Turnbull’s ill-fated attempt to cull micro-parties from the Senate, but he too dresses up white male self-interest in ideology, championing libertarianism — but only up to a point. As Crikey pointed out when he first fouled politics with his presence, like many white male libertarians, Leyonhjelm is all about freedom until it starts delivering things he doesn’t like, then he starts talking about killing people and charging them with crimes against humanity, or complaining to the Human Rights Commission, or criticising other people’s free speech when used against him.

There was no line-crossing in the smear of Hanson-Young — it was their business model in action. And that of Sky News more broadly, which tarnishes the awesome work of outstanding journalists like David Speers and Kieran Gilbert with a stream of bile designed to appeal to angry over-55s who think everything gone to hell in this country since those uppity feminists/Aboriginals/Muslims/gays got in charge.

Do you believe Senator Leyonhjelm is driven by a feeling of being aggrieved or genuine ideology? Write to boss@crikey.com.au and let us know. 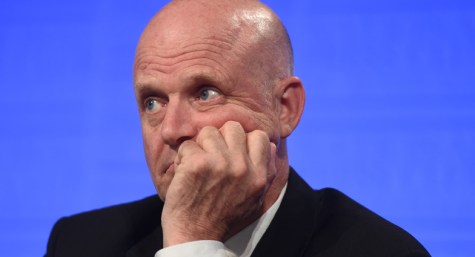 It seems to me that it wasn’t until the advent of the Abbott/Turnbull government that so many and so vile a contingent of conservative politicians and Murdoch lickspittals have emerged to befoul our public representitives. Can no one do anything to reduce their numbers?

To take offense, you need to choose to be offended. Stick & stones and all that…

And if someone steals my wallet, I chose to be stolen from?
Classic victim blaming.

Did you choose to be dropped on the head as a baby?

He could get away with that vile smear when he was within Coward’s Castle. However, repeating the same smear outside of Parliament might be the biggest mistake he has ever made.

This is the behaviour of a vile man. I have always had the impression he was a 16 year old delinquent who never grew up, this tends to confirm my thoughts. He is bad enough, but the presenters and the EPs on Sky should be flogged and then sacked. Disgraceful and more so because they threw a junior under the truck while dodging their own responsibility.

More of the same

Sky sacked a woman for the exchange between misogynists on live TV, great.

And Turnbull took four days to say that all women should be respected not just Liberal women, though I do doubt his sincerity. It does appear though as though there has been some tiny progress compared to the treatment of Ros Kelly and Julia Gillard. Though again few “respected” female journalists and commentators reacted immediately but waited to see if they could continue their pretense to be feminists. Of Murphy and Dwyer I have found no comment despite their feminist comradely last week.