Google and Facebook hook you into their vast data collection and advertising networks when you press ACCEPT.

The internet can often feel like a very divided place. But if there’s one thing which unites almost everyone, it is this: no one reads the terms and conditions.

To prove that point, a  2016 study, asked users signing up to a fictitious social media service to consent to giving away their first-born child — and 98% agreed.

Even if real online services aren’t trying to take your first-born, they are definitely interested in hooking you (and your children) into their vast data collection and advertising networks. So here’s a question – if you use Google and Facebook, how much do you really know about how they are using you? Here are a few things that you might not have realised you were signing up for when you clicked “I agree”.

When users first upload their contacts to Facebook’s Messenger for Android or the Facebook Lite app, Facebook automatically begins tracking all of their phone calls and text messages, whether or not they make them through the Facebook app. Facebook has said that it doesn’t store the content of your calls or texts, but it does record information like the date and time phone calls were made, who they were to, whether they called you or you called them and how long the call lasted for. Facebook also keeps a record of every contact you’ve had on your phone — even if you later deleted them.

If you have uploaded your contacts to Messenger for Android or Facebook Lite and you want to stop Facebook from tracking your phone calls and texts, you can go to Home, tap your profile picture in the top right corner, tap People, then choose Continuous Call and SMS Matching and hit Turn Off. But Facebook doesn’t make it easy – you’ll need to turn it off separately in both the Facebook app and Messenger app, and on each individual device you use.

Facebook tracks your physical location in several different ways. This includes information such as your IP address, profile information, search history and activity on Facebook (such as events pages or searches), but it also includes much more detailed information, which can be used to monitor your location in real time. In addition to GPS tracking, Facebook uses information from your device about nearby wi-fi signals, Bluetooth signals and mobile phone towers to calculate your precise location.

One of the ways in which Facebook uses this information is to tell advertisers about the places you visit, including whether you physically go to the advertiser’s shop after seeing an ad on Facebook. Facebook says that in some cases they can track users regardless of whether the Facebook app is open. 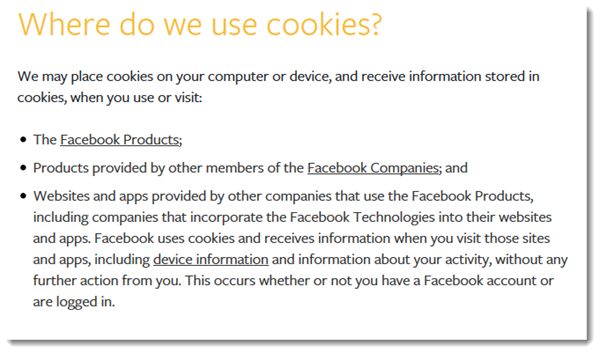 Facebook uses the information it collects from these third-party websites and apps to add to what it knows about its users, and to build up “shadow profiles” about individuals who have never had Facebook accounts.

In his recent appearance before the US Congress, Facebook CEO Mark Zuckerberg claimed that tracking of non-users and logged-out Facebook users was necessary to “prevent people from scraping public information” and that “on security, there may be specific things about how you use Facebook, even if you’re not logged in, that we keep track of to make sure you’re not abusing the systems.” It’s hard to see how either of these claims stack up for tracking users when they’re not even using Facebook’s services, however. 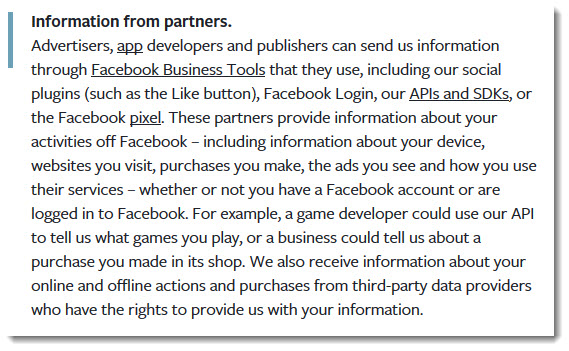 The combination of online and offline data – such as financial transactions, interests and hobbies, home ownership, estimated income, family relationships, how often you go to restaurants or how far you commute to work – enables Facebook to target individuals to an absurdly specific degree, such as creating individualised video ads for customers who Facebook calculated were likely to be interested in buying tortilla chips with their NFL team’s branding on the packaging. No, really.

Google tracks much more than just your search history

Many people are probably aware that Google, and its other services like YouTube, record every search request they make (including voice searches) and every result they click on, but analysing requests is only a small part of the data Google collects on you. Depending on which services you’re using, Google collects data about:

Google can use this data to infer a huge amount of information about you, including:

… all of which Google will use to target you with advertising.

Google tracks where you go, when you go and how long you stay there 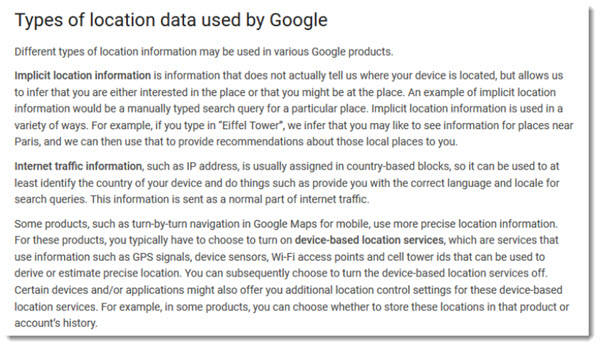 Google uses a range of different technologies to pinpoint your exact physical location. Whilst Google says that customers “typically have to choose to turn on device-based location services”, in 2017 it was revealed that Google had been tracking Android users after they had turned location services off and even when the SIM card had been removed.

Google uses location data to target you with advertising from businesses near you. Like Facebook, Google also uses it to let advertisers track whether you actually follow through on the ad they show you by visiting the physical store, and if you buy something.

Google uses location data for many other purposes as well. For example, Google monitors who physically visits a location (such as a business, a library or tourist attraction) and when, to analyse the times at which most people are likely to visit, how long they’re likely to stay, how many people (or at least Google users) are there right now and even how long you’re likely to wait for service at restaurants or cafes.

On one hand, it’s a service that might save you a few minutes waiting in line –  on the other, you might then spend that time thinking about how a global corporation which needs to remind itself not to be evil is tracking you everywhere you go.

Google tracks you across millions of other websites

Google has a range of tools which website owners can use to track visitors to their site. Many of these tools have a version which Google offers for free, the most common of which is Google Analytics. The pay-off for Google from offering some of their tools for free, of course, is that Google gets access to data about how people use each website, and can connect that data to track individuals as they move across the web.

Google has not publicly announced the number of websites using their analytics tools since 2012, but estimates suggest that 72.4% of the top 10,000 sites are using Google Analytics.

Google doesn’t just track whether you visit a site. It also monitors your behaviour while on the site, including how long you spend on the site, which parts of the page you scroll to and even tracking your mouse movements.

Google and Facebook both use you to advertise to other people

The saying “if it’s free, you’re the product” is used a lot in relation to Google and Facebook. In some cases, though, you’re not just the product – you are also being used as the salesperson, only it’s the companies who are getting paid for it.

Permission to use your name, profile picture and information about your actions with ads and sponsored content: You give us permission to use your name and profile picture and information about actions that you have taken on Facebook next to or in connection with ads, offers and other sponsored content that we display across our Products, without any compensation to you.

Most people probably don’t realise that when they like a page in Facebook or interact with a business using their Google Account, they could be signing themselves up to serve as brand ambassador for that business to their friends and family.

Realistically, it would be almost impossible to use the internet regularly and not have either Google or Facebook collect some data on you. The good news is, there are steps you can take to at least limit the amount of data they collect. You should start by adjusting your privacy settings on Google and on Facebook. There are also a range of browser add-ons designed to protect your privacy and stop you from being tracked online. Just make sure that whatever add-ons you install come from a trustworthy source, such as the Electronic Frontier Foundation’s Privacy Badger.

There is nothing inherently wrong with consumers making an informed choice to trade some of their privacy for access to services. The problem is that right now when most people “pay” for something with their data, in practice they don’t actually know what the price they’re paying is – they’re just doing the data equivalent of opening up their wallet, handing it over and trusting that they’re not going to be ripped off.

Elise Thomas is a Melbourne-based freelance journalist with an interest in technology, data and human rights.