Trouble at the Weekly Times, the film industry selling us fiction, and Aunty declares war.

The film industry’s bleating isn’t backed up by the facts, we hear about trouble at a rural paper, and as if the ABC needed more powerful enemies …

Trouble at The Weekly Times? Since rural newspaper The Weekly Times appointed its first female editor Natalee Ward in July last year, Ms Tips hears there’s been quite a turnover of journalists in the newsroom. News Corp and Ward herself were quick to correct rumours this morning that she’s been sacked (she told Crikey she’s on family leave and will be back on deck in a couple of weeks).

Ward said a previous formal complaint against her by one person had been dismissed, and it wasn’t related to her current leave. “The editor who was there before me had been there for 10 years. When I became the editor, a couple of people left, which is fairly standard,” she said.

Cut the nonsense. At Crikey, we’ve been pointing out for years and years that the film branch of the copyright cartel are the single biggest bunch of bullshit artists when it comes to dodgy “independent reports”. And once again we must point out the vast gulf between the claims of the film industry and reality. Today Fairfax has run an article on how the local film industry is “reeling” from filesharing. The industry’s Mr Rent-a-quote for the Apocalyptic Impact of Filesharing, Village Roadshow’s Graham Burke, declared there were “empty desks everywhere … we can’t compete with stolen goods being sold for free”. Mind you, this is all after the copyright cartel, made up some of the world’s largest corporations, obtained the power to censor the internet to stop people from accessing sites the cartel didn’t like.

But as always with the film industry’s bullshit, it pays to check the facts. According to the most recent ABS employment data, the motion picture and sound recording sub-industry employed 43,800 people in the May quarter. That’s the highest ever level recorded. And what was the previous highest ever level of employment? The February quarter (40,400). The local industry is at historic highs in terms of jobs — and employing more than twice as many people as when George Lucas was making the Star Wars prequels here in the 1990s. Empty desks, Graham? Must be because it’s standing room only.

Who’s this bunch of jokesters? The NSW Greens “left renewal” faction seems to wink in and out of existence, like Brigadoon. Their demise, announced months ago, appears to have been exaggerated. Nevertheless they are not responsible for this meme pinging around: 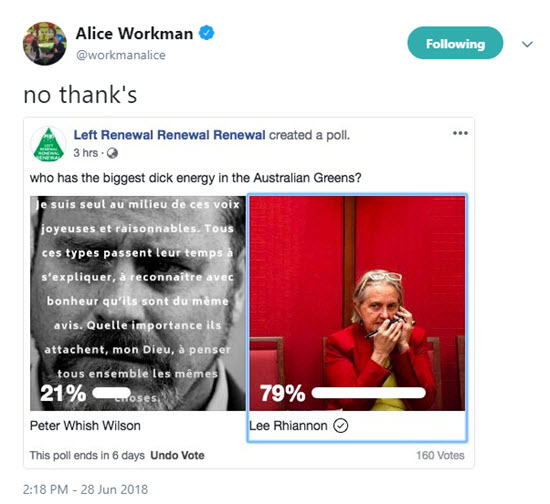 Who is putting it about, so to speak?  The faux Epeolatry and the French text suggest it’s straight from the heart of the ALP Right. Maybe even Bill Shorten’s skunkworks, with time on their hands. Meanwhile the real Left Renewal is due to split in an acrimonious dispute about trans politics, in early September .

Aunt we friends? While the ABC may have continued it’s run as The Beatles of trust in the media (once again topping the charts this week), one tipster got in contact to point out a lapse from the national broadcaster:

“While I don’t like to hang shit on the ABC, I find this opening to a particular yarn to be be appalling: ‘New $7 billion drone fleet will hunt enemy submarines in South China Sea‘ [Ms Tips note: the emphasis is ours, not the tipster nor the ABC’s]. As Australia is not officially at war with any particular nation, the implication that China is the “enemy” is at best clumsy, and at worst, downright provocative.” 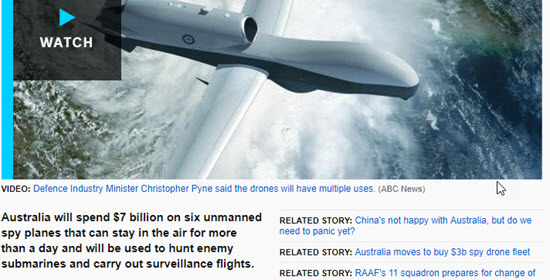 Ironically the next suggested story observes that China isn’t all that happy with Australia; understandable given the public broadcaster seems to have quietly declared war on them.

NSW Greens are worried about the ‘vibe’ of Newtown

Where in that story in your article does it say China is the enemy? What is the implication and how?
The South Chins Sea is a largish puddle of water, could be Koreans, Russians, Yanks, and any number of different nations submarines lurking in the depths.
It’s handy that if we do declare war on one of them to have something that might detect them. But then it’ll be like a dog who chases a car and catches it. What to do now?
Making up False News against the hapless ABC is not cricket.

Exactly this.
These are military tools. Their purpose is to hunt enemies- this is an objective fact. This does not imply Australia has any current enemies to hunt, let alone that China is an enemy. Way to shit-stir.

(While you’re correcting that one, feel free to correct the ad hom about the ALP Right)

Oh yes, the industry’s Mr Bullshit Rent-a-quote is one that really can’t shut up. I really feel for any interviewer having to sit with him, knowing anyone who was watching has now now gone.

If today’s edition really was written by Ms Tips she seems to be supping from Grundle’s verbal pyrotechnics cup.
Not quite the Master’s prose but lively enough.

These are US drones that the US wants to use for surveillance in the South China Sea; how nice of them to allow us to pay them $7b for said drones and do the job for them, in the process incurring suspicion if not outright hostility from our northern neighbours. Once again our government is complying slavishly to instructions from its masters.