In an extraordinary prosecution likely to have massive ramifications for free speech in Australia, the Coalition government wants to jail lawyer Bernard Collaery and former intelligence officer Witness K in relation to the revelation that ASIS illegally bugged East Timor's government.

In a case expected to have major free speech ramifications, former ACT attorney-general and Canberra lawyer Bernard Collaery and former ASIS officer “Witness K” face jail after the government launched an extraordinary prosecution in relation to the bugging of the East Timorese cabinet.

In 2013, Collaery — then acting both for the East Timorese government and for Witness K, a former senior Australian Secret Intelligence Service (ASIS) officer — revealed that ASIS, at the instruction of the Howard government, had illegally bugged the East Timorese cabinet in 2004 to secure an advantage to Australia in treaty negotiations with the fledgling state over natural resources in the Timor Sea. Both the Department of Foreign Affairs and Trade (DFAT) secretary at the time, and the then-minister for foreign affairs Alexander Downer, later took positions with a beneficiary of the treaty, petroleum company Woodside.

K was unlawfully dismissed from ASIS following the East Timorese bugging and took his case to the Inspector-General of Intelligence and Security (IGIS), who advised that he would be able to raise the matter in a legal forum. Collaery, also acting for the East Timorese in their Timor Sea Treaty case against Australia, obtained advice confirming that that case met the requirements identified by the IGIS.

Five years on, the government’s handpicked Commonwealth Director of Public Prosecutions, former Trade Union Royal Commission counsel Sarah McNaughton, has charged Collaery under s.39 of the Intelligence Services Act, which prohibits the communication of “any information or matter that was acquired or prepared by or on behalf of ASIS in connection with its functions or relates to the performance by ASIS of its functions”, without the approval of ASIS. Witness K has also been charged on one count of conspiring with Coallery to communicate information. 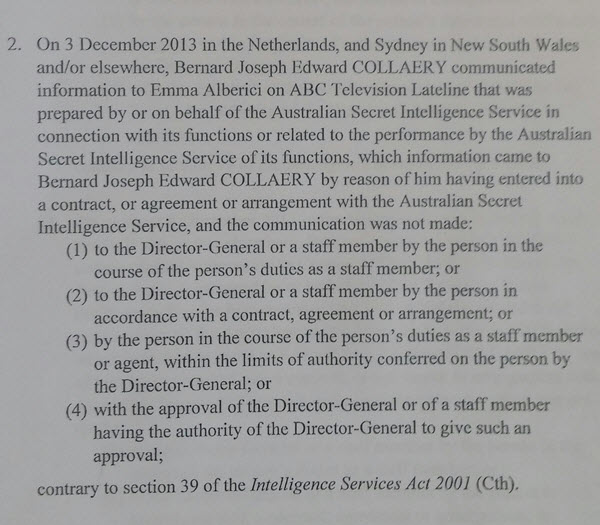 Extract from the summons

The charge currently carries a sentence of 10 years in jail but Collaery and K will be charged under provisions in place in 2013 — before then-attorney general George Brandis strengthened the sentence — which carries a two-year jail sentence. The matter will be heard in the ACT Magistrates Court on July 25, where it is expected that the Commonwealth will attempt to have the prosecution conducted in camera to prevent the trial from being scrutinised by the media.

In an extraordinary further move, the government has also sought to slap a gag order on Collaery to prevent him discussing his defence or aspects of the case without its approval.

The government has punished and harassed K and Collaery since 2013. K was refused his passport despite the head of ASIO making clear the domestic security agency had no concerns about the former ASIS officer being allowed to travel overseas. It is understood that Julie Bishop and ASIS are behind the decision to withhold K’s passport; K’s lawyers have taken action to have that decision overturned, but that action has now been pre-empted by the prosecution of Collaery. Collaery has himself been the subject of constant surveillance by intelligence agencies.

Click to read all of Bernard Collaery’s media release

McNaughton’s prosecution – which is being handled by the Commonwealth Director of Public Prosecutions’ “Organised Crime and Counter Terrorism” unit, as though the former ACT attorney-general and the former senior ASIS officer are Islamist militants – fulfils the threat made to Collaery by Brandis in 2013 that he might be prosecuted. It marks yet another step in the Turnbull government’s war on criticism and dissent, and is directly linked to the government’s current war on the ABC. ABC journalists Emma Alberici, Peter Lloyd, Connor Duffy and Marian Wilkinson, and producer Peter Cronau, are all identified in the prosecution as people to whom Collaery passed illicit information.

As Jim Cairns once observed (probably not the exact words): “If the police state marches in Australia, it will march on the back of the Right”.

Marcus Hicks
Reply to  The Curmudgeon

Reminds me of a similar quote made in the US:
“When Fascism arrives in America, it will be carrying a Bible & a US Flag”

It’s funny that those self-proclaimed “Libertarians”, such as David Leyonhjelm, who pontificate at length about the evils of 18C have nothing to say about this case which is a far bigger threat to democracy and freedom of expression than a bunch of racist University students being taken to court.

Mick, I understand Leyonhjelm is a member of the IPA. Might help explain his selective libertarianism.

By golly Hastie and Porter and Lewis will want to be careful!!! So will that former Fairfax journo – whatsisname?

AR
Reply to  Terry of Tuggeranong

Or Blot, who earli.er this year, boasted yet again about how he had acquired “..the only secret report Wilkie ever wrote..” for the ONAnists back during the run up to Iraq War II.
The AFP, after finally being prodded into action a couple years later, took almost 2 years to be unable to discover how he had acquired it as the only copy signed out at the time was to Lord Bunter, the Downer’s office where Fry-dem-bergs, a mate of the Blot, was a staffer.

and Chris Kenny was the media advisor who apparently knew nothing about which of his colleagues was leaking classified documents to Bolt. You’d think there would have been hell to pay to whoever it was who broke the law.

I have known Bernard Collaery for nearly 40 years. He is a good man with a heart of gold. I am appalled that he continues to be harrassed by the authorities over the East Timor controversy. He has suffered enough.

God forbid that we Mushrooms should find out what “our government”, (the one we pay for – in more ways than one?) is doing or has done in our name, with our money – as exemplified in “our” buggery of Timor-Leste to help Woodside?
….. We probably wouldn’t vote for them and their ways?
What a parade of grubs.

I reckon I know who should be facing charges.

Well at least Lord Bunter the Downer is back on shore so he is available to assist with enquiries.

But Lord Bunter has that unfortunate memory loss displayed so blatantly at the oil-for wheat Cole inquiry. Poor fellow couldn’t recall a thing! One can assume his memory has worsened with age.

Here’s an idea: how about we further assist Woodside with a corporate tax cut?