A retiring magistrate in Brisbane has held the Courier Mail to account, saying some reportage showed a fundamental lack of understanding from the chief court reporter.

A Queensland magistrate who was repeatedly criticised by the media during her tenure has used her retirement speech to hit back at, in particular, the Courier-Mail.

Bernadette Callaghan has been under scrutiny from the Courier-Mail, as well as other media, for what they’ve said is soft sentencing. And in a valedictory delivered on Friday, Callaghan dedicated most of her address to media reporting about her and her sentencing.

She quoted two stories that ran in News Corp papers (the Courier-Mail and the Gold Coast Bulletin) that she said were inaccurate. “I am not going to bore you with all of the inaccuracies that have been written — we would be here all day — but will mention only two,” she said. She criticised then-Gold Coast Bulletin chief reporter Kathleen Skene’s report about Zak Cree, which she said misconstrued the case.

“The situation represents a fundamental lack of understanding from the chief reporter, a seemingly trustworthy title that one would think would be above the pettiness of tabloid journalism and hyperbole,” Callaghan said.

She said that editors took the public for fools.

“I would like to know what these newspapers’ editors think they are doing to our democracy,” she said. “These attacks on the various judicial officers who sentence those that come before the courts harms our society when they rare not a fair, nor accurate, representation of what in fact occurs.”

Callaghan said the influence of newspapers was waning, and that the public wanted responsible journalism, and said she believed social media would be the best way in the future for the public to understand how courts work.

The Courier-Mail responded on Monday, with an “exclusive” report on the speech, quoting victims of crime and including a timeline of Callaghan’s “soft touch”. 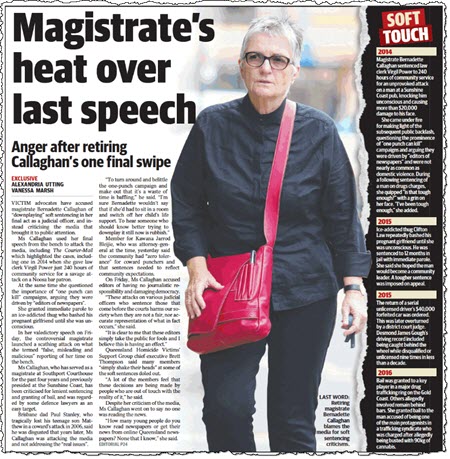 Brisbane’s only daily newspaper also dedicated the main part of its editorial to the speech, calling it “self-serving” and comparing her to US President Donald Trump:

The inherent limitations and contradictions of Ms Callaghan’s criticisms are all too common among those in privileged public positions who struggle with the concept of scrutiny from the free press. US President Donald Trump has become the standard bearer of this kind of behaviour, routinely deriding the media over ‘fake news’, while being unable or unwilling to address the facts. However, Mr Trump is certainly not alone when it comes to this behaviour.

Callaghan has been given the descriptor in Courier-Mail articles of “controversial magistrate” since at least 2013.

What do you make of the retiring magistrates’ comments? Let us know by emailing [email protected].

The bullies in a one paper town

What does life look like after editing a major metro newspaper?

Bolt and Blair turn on one of their own for thoughtcrime

Courier Mail, a scurrilous tale. Callaghan should know better than to feed the animals.

If you are a female in a position of power expect criticism of any action that is left of Attila the Hun. It seems the Murdochritty are only too happy to go in boots and all on a woman who dares to think for herself; and a magistrate who has no ability to answer criticisms except after retirement must be an even more tempting target. That the Murdochrity comes out swinging shows the paucity of self reflection among that testosterone fuelled mob.

Using Trump to attack Callaghan? Trump? A pathological liar who turns to FUX News for his affirmation?
Today The Muppets were trying to get us to laugh along with them at Shorten’s expense? ….. Apparently, in their eyes, Hanson (a not so closet Limited News Party member, doesn’t trust Shorten) is some sort of credible judge???? That this is ‘one more reason not to vote for Labor’?

“We’re for you”??? As long as you vote for the Limited News Party, look to them for verification of your ideology, not minding only getting half-baked/fake news on which to validate those opinions?

We’re going after that 60+ hours in moderation record?