The Feed has said goodbye to a true Australian icon, Barabbas Loins.

Zelic and Foster stand up for themselves, Russell takes a strange role, The New York Times investigates itself, and other media tidbits of the day.

Farewell to Barabbas Loins. SBS’ The Feed has broadcast one final farewell from Barabbas Loins, played by Mark Humphries who announced this week he was leaving the program. Barabbas Loins has had a similar career trajectory to Barnaby Joyce, and is a recurring character in Humphries’ satirical videos for The Feed. In a weekend profile, Humphries told News Corp’s Stellar magazine he hoped to work with SBS again at some point, but was also keen to try a sitcom: “I love sitcoms and I would like to just go away and think of something that I could bring to the table. Maybe there is no appetite for that, but I feel that it’s time to at least explore that avenue.” 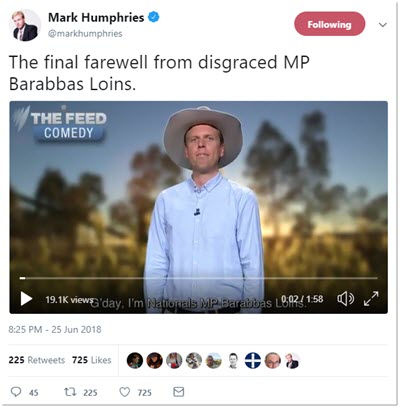 Video of the day. SBS World Cup hosts Lucy Zelic and Craig Foster have responded to criticism (mostly on social media) of Zelic’s pronunciation of player names. She makes a point of pronouncing their names as they would be said in their home country — a practice that was celebrated when done by the late Les Murray. In an emotional response, Foster defended Zelic, saying: “That’s what SBS is about. SBS is about respecting every single culture, and of course, the way that you use their language is the most important way to show respect to someone.” 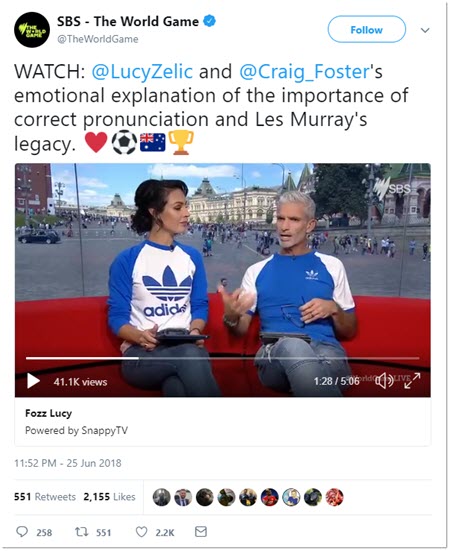 The loudest voice in the room. Russell Crowe will play Fox News founder Roger Ailes in a Showtime miniseries based on the rise and fall of the man behind the cable network. Ailes died last year, after leaving the network amid sexual harassment allegations. He was widely credited with legitimising Donald Trump as a presidential candidate through Fox News.

NY Times reporters investigate their own. In a front-page story on Sunday, The New York Times had three reporters (with additional research and contributions from another five journos) report on a saga that has brought one of its reporters into the wrong kind of spotlight.

Times reporter Ali Watkins’ phone records were seized by authorities as part of an investigation into national security leaks earlier this year. And instead of the focus being on press freedom, Watkins’ affair with a top security aide has been the focus of much of the reporting. Her former editor at the Huffington Post, Ryan Grim, told the Times: “What I see is the Trump administration seizing a reporter’s records and tricking the press into writing about her sex life. It’s appalling what the Trump administration is doing, and I don’t think you should enable it.”

Seven’s House Rules had another strong outing — a season high 1.58 million (thanks to a surge in regional viewing with a high 635,000 watching last night). Certainly that’s the impression from the weak Talkin’ ‘Bout Your Generation — 801,000 nationally is barely enough. It was fourth in its time slot and was easily accounted for by 7.30 (879,000 nationally) and Back Roads (936,000). Read the rest at the Crikey website.

Optus drops the ball on World Cup coverage. But that’s privatisation for you.