Is Melania Trump really wearing her disdain for immigrant children?

Melenia Trump was seen sporting a slogan apparently dismissing treatment of immigrant children, but the message might actually be directed a little closer to home.

First Lady Melania Trump has been photographed wearing a US$39 Zara coat while boarding a plane taking her to visit children of asylum seekers locked up by her husband, President Trump.

The coat is emblazoned with the words “I really don’t care, do u?”, which some people have quite reasonably interpreted as a message from Melania on how she feels about the issue of the children who have been taken from their parents.

There’s a significant lede being buried here: Melania Trump does not wear a $39 anything. This is a woman most usually clad in Dolce & Gabbana, Christian Dior, Emilio Pucci, Givenchy and Valentino, paired with Christian Louboutin heels.

Her spokeswoman Stephanie Grisham has protested any wider interpretations and said: “It’s a jacket. There was no hidden message. After today’s important visit to Texas, I hope the media isn’t going to choose to focus on her wardrobe”.

Except we can’t ignore Melania climbing the stairs to a plane in a cheap jacket with a message in huge letters, can we?

And more important is the question of what Melania is truly trying to say. If she isn’t sending a giant Fuck You to the outraged citizens of the world then where is her fast-fashion middle finger pointing at?

Home, and more specifically her husband. 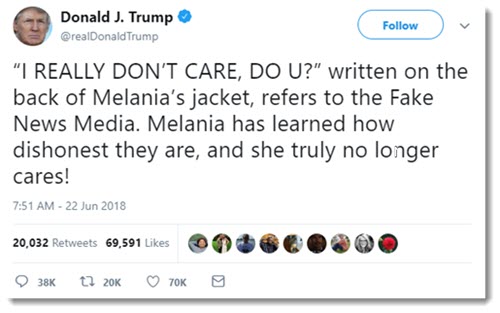 Melania Trump isn’t talking to us, the people already heart broken and frothing at the mouth with outrage at her husband’s inhumane proclivities. This is Melania Trump talking to Donald Trump.

I believe that the jacket is a mangled reference to someone she truly despises at this point in her life. Melania wearing a cheap Zara jacket is like a teen acting out with a slogan t-shirt. It’s like the evangelical minister’s daughter wearing a “Pussy Riot” tee to Sunday service.

She won’t have considered the press and public would think she “doesn’t care” about the immigrant kids she is visiting — she actually got off her arse and went to a centre where these children are being imprisoned.

And I don’t think it was to try and convince the world that Trump gives a shit. Remember this is a woman who, when the world was watching, swatted Donald Trump’s paw away like it was nothing more than a bloated mosquito with cognitive delays.

While Trump surrounds himself with sycophants who will stoop to unimaginable depths to do his bidding, he has married a woman who doesn’t particularly care that the optics of her disdain for him are now the stuff of memes.

I am not saying Melania is a platinum grade humanitarian, but I would argue that she isn’t talking to the public or the press through her highly unusual fashion choice, she’s talking to the President of the US not us.

Rebekah Holt is a journalist and psychotherapist who writes the Media Advisor column for Crikey.

This is the disdain of the ultra rich American v the average American. The top 0.5% v the rest. Of the people, by the people, fuck the people.

If that is the case Rebekah, and Melania’s public/private stance is to oppose Trump/President . . . ???

The Trumps are the US version of the Ceaușescu family. Arrogant & disdainful of everyone they consider “beneath” them.

Rebekah: what do you think was the original intent by Zara in making this jacket? To whom was it pitched and what was it thought that they would be trying to say with it? Was it originally meant just as a statement about fashion (a pretty redundant one, in my view, as I think there are fewer, if any, more truly trivial industries than fashion) or was it supposed to be addressed to the wearer’s “haters”? It’s all a bit of a mystery to me and I would value your thoughts!

I hope that the author is correct “This is Melania Trump talking to Donald Trump…she’s talking to the President of the US not us.” but it seems to be a stretch of a very long bow.
Is she also wearing el-cheepo plimsolls and jeans to complement the unkempt hair?
I think we should be told.