After a disastrous run with Optus Sport, the World Cup will now be screened on SBS until the end of the group stage.

Optus is the real loser of the World Cup so far, fire warnings for ABC Sydney, Natalie Joyce’s unpaid interview, and other media tidbits from the day.

World Cup to stay on SBS. Optus has agreed to allow SBS to show all World Cup soccer matches in the group stage, after disastrous streaming problems with the first games. Optus CEO Allen Lew apologised on Sunday for the playback errors that fans (who paid for the privilege of watching) experienced, before the same problem occurred that evening.

SBS announced yesterday afternoon it would broadcast all matches until the end of the group stage on June 29. SBS managing director Michael Ebeid said in a statement: “The FIFA World Cup is the absolute pinnacle of football, a sport that Australians are deeply passionate about.”

Yesterday Lew said: “We as Optus have tried hard to deliver an exceptional viewing experience and deeply regret this has not been the case for all Australians … As confident as we are in our capabilities, we have listened to feedback from the Australian soccer fans.”

Customers who paid for Optus streaming will be refunded, and Optus has made its streaming service free to Australians who sign up before August 31.

ABC HQ built with non-compliant cladding. The ABC has told staff at its Ultimo headquarters the cladding on the outside of the building doesn’t meet current building code standards. The public broadcaster had an expert look at the cladding after the deadly Grenfell Tower fire in London last year.

In an email to staff, chief financial officer Louise Higgins said the cladding was commonly used when the building was constructed in 1992, but no longer met fire safety standards. “We have been advised it is safe to stay in the building while we resolve this, and we will be implementing additional safety measures based on the advice of these experts,” Higgins wrote. She said no other ABC buildings had the same cladding.

The safety measures given to staff are focussed on definitely not letting a fire start in the building. They include: doing a general clean-up, testing power boards and extension cords, removing any electrical appliances not supplied by the ABC, and familiarising themselves with evacuation procedures.

Natalie Joyce speaks. Barnaby Joyce’s wife Natalie Joyce has chosen The Australian Women’s Weekly to share her “exclusive” story — an interview they have stressed in promos is unpaid. The June edition of the Weekly features Joyce criticising her husband and his new partner Vikki Campion’s decision to accept $150,000 for their Sunday Night interview. 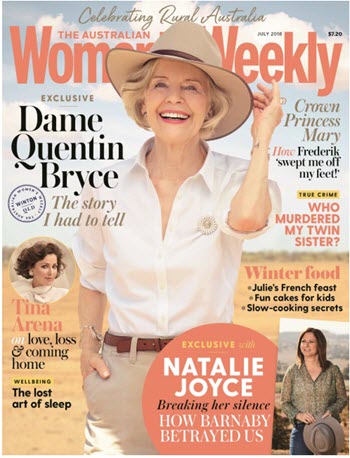 Murdochs win from Fox bids. Shareholders in 21st Century Fox are the big winners from the bidding war between Disney and Comcast for assets owned by Fox. Even if Comcast ups its offer, Disney will win because it has offered cash and shares — and the Murdoch family wants the latter for tax reasons. Comcast can only have a chance of winning if it is prepared to offer shares to win over the Murdochs and ease their potential tax pain.

It’s now clear that until Comcast appeared with the higher offer a couple of weeks ago, the Murdochs were favouring Disney because it was offering shares which helped the Murdochs’ tax position. In their haste to get Disney shares, so that they could roll over their tax liabilities, the Murdochs had forgotten about the non-family shareholders, most of whom would have wanted cash, especially big investors.  — Glenn Dyer

Glenn Dyer’s TV Ratings. Seven’s night easily, again thanks to House Rules (1.33 million nationally, another series high for a Wednesday night). Ten’s Masterchef averaged 1.07 million nationally. The World Cup on SBS from 9.30 (Portugal-Morocco) was decided in the first few minutes with another Ronaldo goal, but 667,000 viewers watched and that dominated the night until the end around 12.30am. That is why the commercial networks were happy to have Optus stream most of the games instead of SBS.

Optus drops the ball on World Cup coverage. But that’s privatisation for you.

Re picture of WW front cover-how many different fonts can you cram onto a piece of paper?

I assume that Natalie Joyce was not offered payment by WW, and that she did not request it.