The amazing props of the tampon tax protest; the government department that wants your data can’t keep it safe; and is Energy Australia trying an old school (and highly cheeky) tactic in keeping competition at silenced?

IDGAF ADG. From the department that brought you data retention and mass surveillance comes a perfect example of why they cannot be trusted with it. After the reports of the hacking of human resources company PageUp potentially compromised the details of thousands of Australians, The Australian suggested the Attorney-General’s Department could be one of PageUp’s affected clients. And, as it turns out, a tipster has got in contact to confirm that their job data has been potentially breached.

They sent us through an email they received regarding a job they had applied for several years ago, which said:

Although PageUp is continuing to investigate and monitor the impact of this incident, I am writing to notify you that it is possible that some of your personal details which were held in PageUp’s systems may have been accessed by an unauthorised person and possibly disclosed to others.

According to advice provided to this Department from PageUp, the following information input onto PageUp forms by applicants seeking employment in this Department may have been obtained by cyber attackers who used advanced methods to gain access to PageUp’s IT systems:

– biographical details including gender, date of birth (if supplied – AGD does not currently request that applicants provide this information), maiden name (if applicable), nationality, and whether an applicant was a local resident at the time of the application;

– employment details at the time of the application, including employment status, employer details, and title;

– details of nominated referees, including name, contact details and length of relationship with the applicant.

The email makes it clear it is, at this stage, still being investigated and there’s nothing to specifically suggest the tipster’s personal information was definitively accessed by an unauthorised party, “or indeed that personal details of any applicants to AGD have definitely been accessed” and that it only affected information held by PageUp.

Who has the energy? Is Energy Australia attempting an incredibly cheeky block on competitors? A tipster tells us their last energy bill was accompanied with a pamphlet suggesting they attach a “NO DOOR KNOCKERS PLEASE” sticker to their door. Is this, as our tipster put it, “a cheap and nasty attempt discourage their competitors from door knocking to offer better energy rates”?

Have you received a similar sticker from Energy Australia? Send images and/or info to [email protected]

Post no Billys. The collapse apparently continues. We’re told that music retailer Allans Billy Hyde has closed another three stores. The Gold Coast, Brisbane and Alexandria stores are all gone, leaving just the one store left in Melbourne.

Robinson’s crew grows. Is support for Islamaphobic pin-up boy Tommy Robinson spreading in Australia? Robinson (the nom de prat of English Defence League founder Stephen Yaxley-Lennon) is the latest “activist” attempting to quench the far right’s unslakeable thirst for martyrdom. He’s currently serving a 10-month prison sentence for repeatedly breaching Britain’s contempt of court law — not for his crusade against “Muslim pedophiles” as his supporters like to say.

Robinson’s cause seems to have gained some grassroots support Down Under. A tipster sent us these pics from Liddiard Street in Hawthorn, Melbourne —  two posters were stapled up and then a handful strewn around the street, scattered and half-ruined by the rains — “Maybe someone was disturbed in the act, dropped everything and ran?”

Of course, we’re assuming it’s in support of Robinson. Perhaps someone just has way too many copies of The Who’s classic concept album and, realising they hadn’t added any contact details to their ad, threw the rest away in embarrassment? 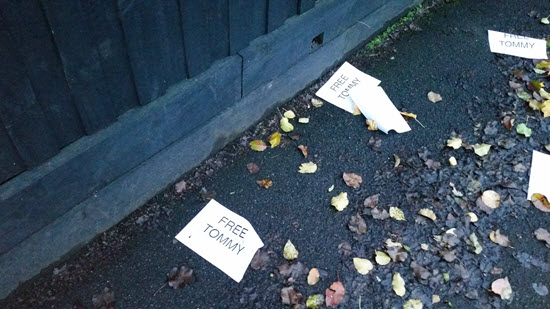 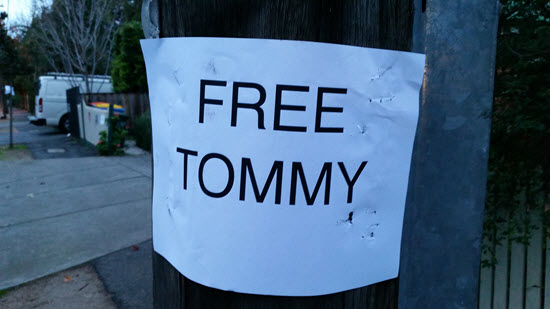 Have you see any of these posters? Let us know.

That looks taxing. The bill to axe the tax on tampons passed the Senate today, and its supporters, who congregated outside parliament, gave us some incredibly striking images, as catalouged by Fairfax’s Alex Ellinghausen: 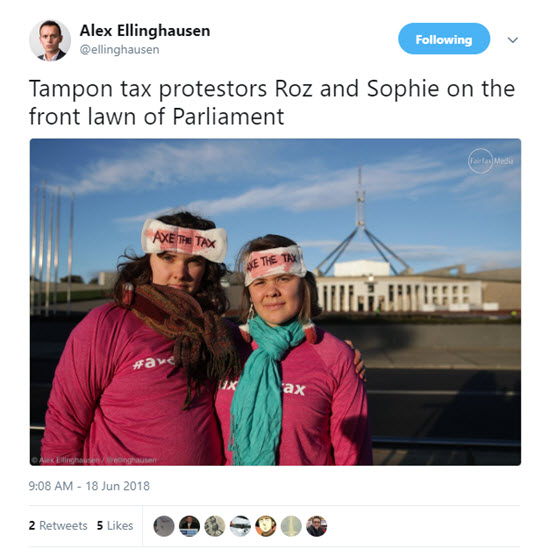 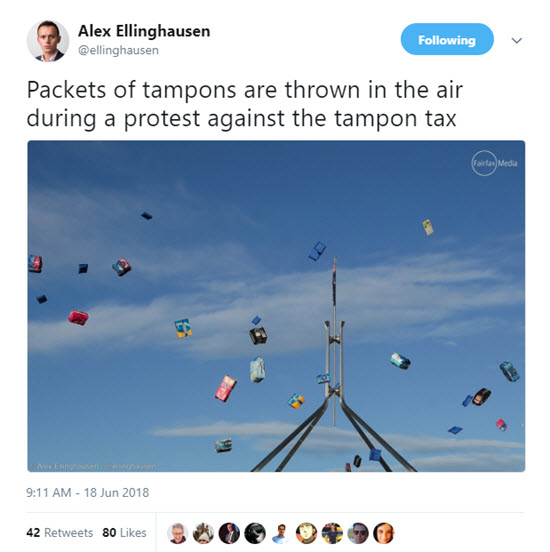 Ms Tips’ favourite was captured by Labor’s Julian Hill — a figure dwarfed by a giant tampon with “stop taxing my period”written on it. 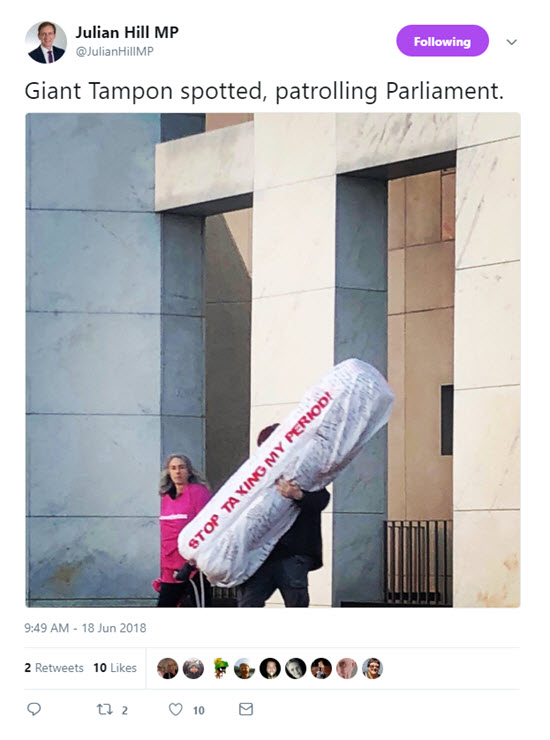 Data retention laws will get worse, with VPNs the only winners

In an environment where some basic necessities are not subject to GST it doesn’t make sense to tax a basic necessity for half the population.

Pre GST these items were taxed as luxuries. Does anyone know if condoms are taxed?
Aftershave? Nose hair clippers? Jock straps?

Apparently condoms don’t attract GST. I imagine the other items would. If sports clothing is taxed jockstraps would be.