Forget the underdogs, FIFA wants the big players in the next World Cup

The 2018 FIFA World Cup has already had its fair share of David and Goliath moments. But with hundreds of millions of soccer fans missing out on representation, won't somebody think of the advertisers?

Italy’s absence from the world Cup is a stunning blow. By drawing 0-0 with Sweden in Milan in November last year, the Italian national football team missed a trip to Russia for this 21st quadrennial contest to find the best team in world football.

The Azzurri let down not only the Milanese, the Romans, the Venetians; they let down the great Italian diaspora who now have to suffer through the first World Cup since 1958 without representation. They also let down Melbourne-based news editors who want a reliable World Cup story. Traipsing to Lygon Street in the early hours of the morning to document rabid fans is a tried and true manoeuvre for collecting World Cup colour pieces.

In 2018, Lygon Street shows little blue bunting. No posters of Gianluigi Buffon, captain, goalkeeper and soul of the team. Flags are scant. The spiritual home of Melbourne’s Italian community cares little for the World Cup this time. In fact, for the 2018 World Cup, finding raucous groups of fans supporting teams other than Australia could be rather more difficult.

The most populous groups of Australian immigrants are those born in the UK, China, India, Philippines, Vietnam, Italy, South Africa, and Malaysia. Only one part of one of those nations is represented at the 2018 World Cup: England. (Scotland, Northern Ireland and Wales compete separately and none have qualified for a World Cup in the last two decades.)

Sending a reporter out to find drunk English football fans would, of course, be possible, but risks making the comment section spill over with people writing “How is this news?”.

The qualification of Costa Rica and other tiny nations allows for Cinderella tales that get everybody dreaming. Iceland, for example, is at this Cup. That has led to some lovely stories that make the world of global football more relatable and human.

But when big teams miss out, the World Cup is relevant to fewer people worldwide. Is that really in the greatest interest of the greatest number? To answer that, ponder this question: how would Australia feel if we missed the Olympics? I’d argue a more inclusive World Cup is better. 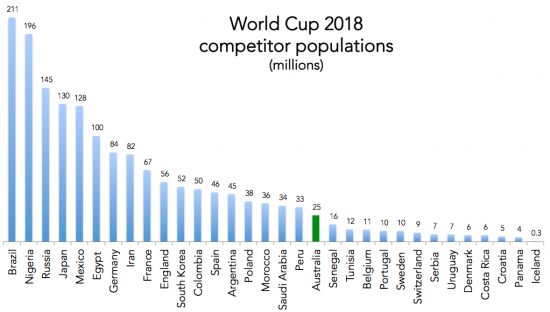 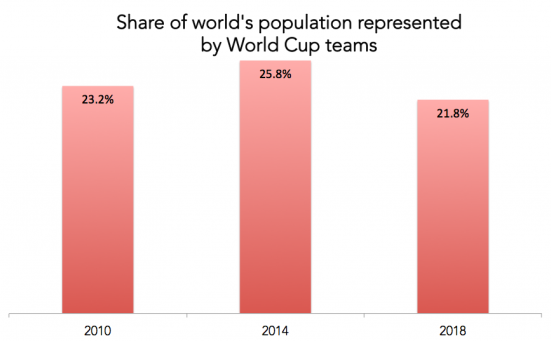 The absence of the USA rips an awful lot of eyeballs away from screens, and even more wealth away from prospective advertisers. What FIFA would doubtless really like is a repeat of the 2002 World Cup, when China qualified. Instead, they got Panama (team nickname: Los Canaleros) making their first cup. Four million Panamanians are delighted and I don’t begrudge them that for a second. But their joy comes at the cost of the despondency of millions more.

The developing world’s population is growing faster than the population of Europe, meaning FIFA’s system — sending 13 or 14 teams from Europe to each World Cup and only five or six from Africa — is increasingly unbalanced.

Re-weighting based on population would mean teams like Italy are even more likely to miss. So FIFA is proposing a bigger World Cup. The competition will get 50% bigger, with 48 teams to attend, possibly starting as soon as the next World Cup in 2022. The big billionaire football clubs are cross that more of their players will be busy on national duties, and the newly enlarged playoff system does seem ill thought out.

But the extra capacity in the system means more of the minnows will have a chance to attend their first World Cup and fewer big teams will miss out. If FIFA can get all of Italy, China and USA to the cup, it will be happy. That will guarantee revelry from Times Square to Tiananmen Square, and on Lygon Street too.

FIFA, as expected, are a grubby shower of bastards

FIFA, as expected, are a grubby shower of bastards

Gah, really? The USA, Italy, all of the above have participated in the 2018 World Cup. They simply failed to reach the final 32, because they were beaten to it by better teams.

What next, shall we start removing teams from the AFL finals and replace them with Devonport Football Club (good old Devonport forever!) to ensure that the population of Northern Tasmania gets a look in?

Look, I get that growing the game and giving large populations something to cheer for is something worth pursuing. But that can be done by scheduling more friendlies with visits from the top 32 (or even the top 8) to showcase the game and test the national team’s mettle. Interfering with deciding the World Cup winners isn’t the way to do it.