Milo protesters face criminal charges, the Mexican-adjacent legal action that will never end, and a collection of #MeToo clothing.

Milo protesters face criminal charges in questionable circumstances, the legal action against a common turn of phrase, and check out the new #MeToo fashion collection.

Awful by design. In what might have looked to the untrained eye like a deeply cynical and fantastically shallow appropriation of a social justice movement to help shill a product, designer clothing store Kholo recently announced a new “#MeToo collection”. “This is for the warriors,” a since deleted description read. “For all the wounds. Mental, physical and the worst; emotional. For the healing.” 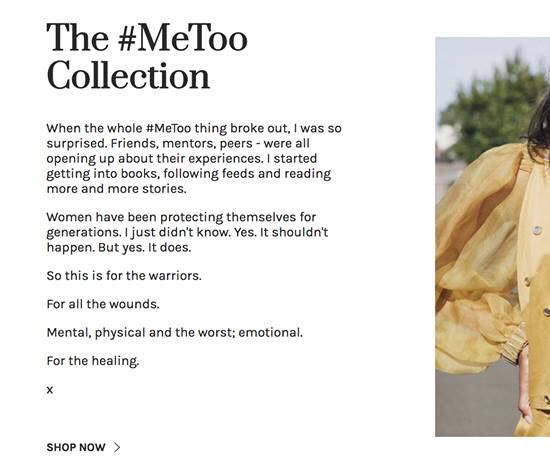 After receiving criticism of the collection on social media, the label changed the name to the “Magnificent Women collection“, and issued a slightly defensive explanation. “If an artist made a piece of art and sold it in a gallery and it was titled #MeToo — would that strike the same conversation? Is it any different because I’m making 20 items of clothing? Or 10 badges? But something inspired me to design. And so I did.”

We totally agree that fashion is an art like any other that is completely entitled to comment on, deconstruct and illuminate the issues of the day. We’re not sure which of the #MeToo collection we like best, but it would have to be between the “Sex on legs” or the “Take me off “. 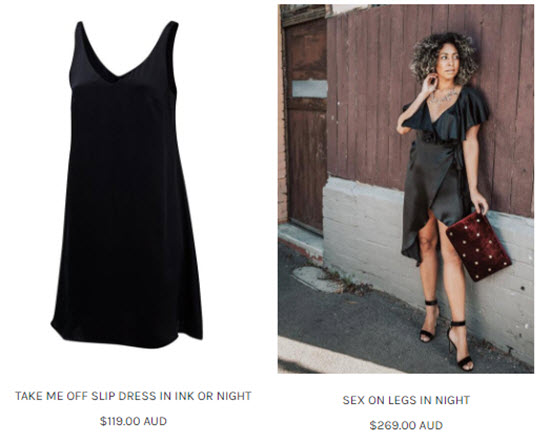 Nowhere to Hyde. The long trainwreck of musical instrument retailer Allans Billy Hyde continues. Crikey has been following the retailer’s woes for years — when they went into receivership, when they denied their workers air conditioning, when stores started to close and allegations of underpayment began to surface, and that they were replacing managers that hadn’t exactly left yet.

We’ve been told it has now closed its doors on two stores (Alexandria, Sydney, and Southport, Queensland) over this past weekend — leaving staff owed tens of thousands of dollars in unpaid or underpaid wages. We also heard that suppliers recently visited the store to reclaim stock after chasing the company for unpaid invoices.

“Staff are now left jobless and with little hope of recovering their lost wages,” one tipster told us. We asked Allans Billy Hyde if this was true, but they didn’t get back to us before deadline.

Milo’s wake. The noise of sparkly bully and alt-right media tart Milo Yiannopoulos’ visit to our shores may have died down as far as the News Corp media, who venerated and then deserted him, is concerned.  Not so for three African Australian residents of the Flemington housing estate across the road from where Yiannopoulous held his December 4 speaking event. They are facing criminal charges over an alleged assault and, according to a fundrasier organised by the Solidarity and Defence Fund, the circumstances are very questionable.

Two were arrested on the day and, according to the fundraiser, a third was remarkably arrested when he went to the police station to complain about the police’s conduct. The behavior of police on the day has long been questioned, with letters to Adam Bandt alleging that “Flemington housing estate residents say they were chased, doused in pepper-spray and shoved into apartment buildings”.

See you next Tuesday. Aggressively OK Mexican-style restaurant Salsas has pulled a Taylor Swift, telling a pub in Footscray that it can’t use the phrase “Taco Tuesday” because they have apparently trademarked it. Matt Bodiam, owner of the Reverence Hotel in Melbourne’s North posted a letter to his Facebook page from Salsa’s legal team, with the ominous, enforcer-like phrasing “We assume you are unaware that Salsa’s is the owner of the registered trade mark TACO TUESDAY”. 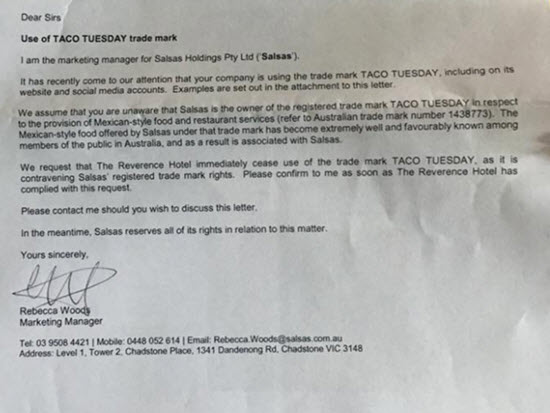 Hell yeah. Ain’t nobody dumb enough to muscle in on Salsa’s turf on purpose. But one wonders, just how busy Salsa’s lawyers are going to be — a quick Google search will tell you that (in Melbourne alone) the “what’s on” webpages dedicate multiple pages to restaurants that do a “Taco Tuesday”.

Tips and rumours: the machines are coming

Well, no wonder – “he went to the police station to complain about the police’s conduct. ” – that’s tantamount to resisting arrest and assaulting police and, by the time the Ubergruppentuber’s “papers Pezzullo” is finished, lese majeste, as well.
We have been warned, pity nobody’s listening or gives a flying.

“Police attacked protesters, before going on a rampage through the Flemington flats, chasing young people, trying to force their way into homes and attacking residents indiscriminately with batons and pepper spray late into the night.” Being black and poor, now that’s asking for it.