Seven's Europe correspondent Laurel Irving has spoken about how she and her cameraman were robbed of their $25,000 camera while in the middle of shooting on the streets of London.

Seven camera stolen. Seven’s Europe correspondent Laurel Irving and cameraman Jimmy Cannon were robbed of their $25,000 news camera while still broadcasting into Seven’s control room from London. Irving told 3AW she’d just finished a cross in to Sunrise, and was recording more material for another broadcast when the thieves in balaclavas approached and took the camera. She has since tweeted that they are both OK, but, “the London crime rate though is crazy”. 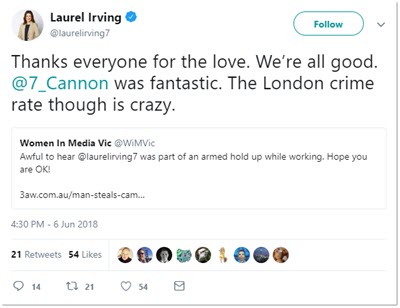 London calling. It’s something the ABC’s newest London reporters might want to keep in mind. The broadcaster has announced two new appointments for its London Bureau. Indonesia bureau chief and former south-east Asia correspondent Samantha Hawley will replace Lisa Millar as London bureau chief. Four Corners reporter Linton Besser will replace Steve Cannane as one of the bureau’s Europe correspondents. Millar and Cannane are finishing up after three and two years in their roles, respectively.

The revolving door. Seven Adelaide’s head of news and the man behind the SA version of Today Tonight Graham Archer is retiring. Archer has been TT executive producer and Adelaide news director since early 2016, when former news director Terry Plane was made redundant. Before Seven, Archer had worked for Nine’s A Current Affair and Sunday, and the ABC’s 7.30. He will finish at the end of the month, to be replaced by deputy news director Chris Salter.

Glenn Dyer’s TV Ratings. With the first game of the 2018 State of Origin on Nine last night, nothing else got a look in. NSW won, but the ratings were the lowest for three years — 3.45 million on average watched the game nationally, against 3.52 million last year and the all time high of 3.95 million in 2016 when NSW won the first game and series. That was a fall of more than 12%.