Journalist's union MEAA has said that staff at Australian Associated Press are 'outraged' after announcements of voluntary and forced staff redundancies.

Australian Associated Press to run a voluntary redundancy program before forcing staff out, Sam Dastyari tries his luck at storm-chasing, Stan subscribers hit a milestone, and other media tidbits of the day.

AAP to cut up to 25 staff. Wire service Australian Associated Press (AAP) will cut 15% of its editorial staff in a cost-cutting move. They will run a voluntary redundancy program, closing on Friday June 15, to cut between 20 and 25 news and data jobs. It will force redundancies if it doesn’t reach its target through voluntary offers.

In a statement yesterday, AAP editor-in-chief Tony Gillies said the agency needed to adapt to its media clients reducing or dropping their subscriptions. “We are in a constant state of change because you have to be in order to remain relevant,” he said. “While we are extremely proud of our news innovations and ‘can do’ attitude, we need to do even more.”

The Media, Entertainment and Arts Alliance (MEAA), which represents journalists, said in a statement that staff were outraged they hadn’t been consulted before the decision to cut was made, and the original deadline of Tuesday (which AAP has since extended) was too soon. “Staff say that given the scale of editorial job losses, it is likely to be an extremely tough road ahead for affected staff,” the statement said.

Gillies said the redundancy deadline was within Fair Work guidelines, and the claim that staff weren’t consulted was “blatantly untrue”. “This is unhelpful mischief from the MEAA and unfair on AAP staff who are having to work through this regrettable situation,” he told Crikey.

Gillies told Crikey last month that AAP had been adapting its strategy and resources as its clients — news publishers — themselves were adapting to shrinking newsrooms and resources.

Stan hits a million subs. Fairfax and Nine’s joint streaming video venture Stan has hit a million subscribers — 70,000 more than what was reported in February. Fairfax announced the milestone at an event in Sydney yesterday, along with some new original series to be produced.

CEO Greg Hywood told an investment conference on May 2 that the platform had about 930,000 active subscribers as at February. That means this is an increase of 7.5%; the new figure represents around 4% of the entire Australian population and roughly 6.3% of the working population aged 15 to 64. It’s also close to the number of people who are subscribers to the Telstra TV product. Still to come, details of Stan’s finances and trading position. — Glenn Dyer

Greatest day ever. The first State of Origin game is this evening and, as always, the metro dailies in Sydney and Brisbane are at their parochial best for the occasion. 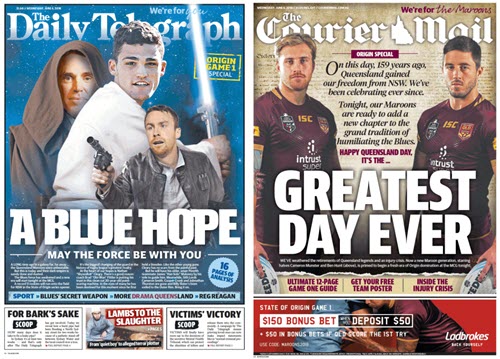 Murdoch’s Sky bid conditional. If the Murdoch family and its partners Disney want to buy the European pay TV giant Sky, they will have to offer a lot more money — another US$4 billion or more — to top the all-cash US$31 billion offer from Comcast. The offers for Sky from both 21st Century Fox and Comcast have been cleared by the UK government to proceed. But while Comcast’s offer can go ahead unhindered, the Murdoch offer has the proviso that it has to sell Sky News — which is why Disney is involved.

UK media analysts wonder if another party might emerge with an offer from Sky News — Disney is the preferred option for the Murdochs (as Disney will get control of all of Sky if its assets purchase deal with Fox goes ahead and isn’t disrupted by an all cash offer from Comcast). — Glenn Dyer

Wall Street Journal shuffle. News Corp has replaced Wall Street Journal editor-in-chief Gerard Baker, changing his role to editor-at-large. He’ll be replaced from Monday by current executive editor Matt Murray. News Corp stuck to its usual style of not explaining the change in its press release, which was how many at the Journal learned of the change.

Baker has been at the Journal and Dow Jones News for 24 years, but his time at the top of the Journal hasn’t been easy. He has faced several internal protests at times on the restructuring plans, cost cutting and perceptions that the paper has been too close to and uncritical of Donald Trump. — Glenn Dyer

Glenn Dyer’s TV Ratings. Last night, watching a bit of MasterChef (1.14 million) on Ten, and Back In Time For Dinner (906,000) on the ABC made me realise what MasterChef is lacking: a competition recreating the culinary atrocities from our past. Bring on the grey roasts, hard chops and boiled vegies, Italian food with red sauce, canned pineapple in Asian food, and condensed milk desserts.

Barnaby Joyce’s plea for privacy netted him $150,000 for a TV interview courtesy of Kerry Stokes who last time I looked had a 33 per cent stake in Sky News Australia.