Transgender and gender diverse people around Australia are being affected by controversial and confusing state laws. Does it really need to be this hard?

On November 15, 2017, the word “yes” rang out across the country; the postal vote in favour of marriage equality was the symbolic victory of a wider campaign for equality. The Coalition’s bag of dirty tricks was empty. December 9, 2017, then marked the day the legislation was passed; when we more or less agreed sex or gender would no longer affect the right to marry.

In practice, the fine print painted a different picture, in which states and territories had an additional 12 months to repeal “forced divorce” laws. This process is underway with the ACT, Victoria, South Australia and New South Wales having now passed legislation as required. A bill is also before Queensland parliament. But there are still many ways that transgender and gender diverse people around Australia are being affected by controversial and confusing laws.

The complicated fight for sex markers

While passports are managed at a federal level, most ID documents such as birth certificates are still issued by the states. The laws and requirements around them vary widely, particularly in regards to how they deal with gender and sex reassignment surgery (SRS).

Only South Australia, the ACT, and Western Australia allow the changing of one’s legal sex without requiring SRS — although the WA government still asserts the inverse on websites and documentation, despite a successful High Court challenge in 2011. Affirming surgery is a major barrier of entry to recognition and documentation for many transgender people — a population that, even when seeking access to such surgery, has long have had trouble financially accessing it.

Laurie, who has previously spoken to Crikey about problems with bureaucratic inertia over their gender identification, pointed out that this is not only discriminatory, but actively harmful. “Surgical intervention to a reproductive organ is a major issue for some people, and a lot of trans people actually don’t want to alter their bodies like this. It also implies that hormone-induced changes to people’s bodies aren’t equally permanent or major, which is both untrue and unfair.”

[The banality of discrimination: how bureaucratic inertia is failing non-binary people]

This legislative requirement can cause great distress to those seeking appropriate identification. Karri told Crikey she was worried about going into the process in Western Australia, the state in which she was born, fearing there may be some “arbitrary requirements” that she fails to meet. “[They might say] I haven’t been on hormone replacement therapy long enough, that I haven’t been ‘out’ and living as myself long enough.”

In South Australia, where legislation came into effect in 2017 that removed the need to apply to the court to change one’s sex or gender identity, Premier Jay Weatherill spoke of the importance of these changes. “The removal of these historical legal barriers will go a long way in ensuring their gender identities are respected, recognised, promoted and protected.”

This is a move similarly recommended by the Australian Human Rights Council and other international human rights bodies. In the report of their findings, the AHRC criticised other states’ focus on genital surgery, explaining that it “de-legitimises the experiences of people who cannot or choose not to have surgery”.

For transgender and gender diverse people who prefer an “X” as their sex marker, their state of birth determines if that is even possible at all*. 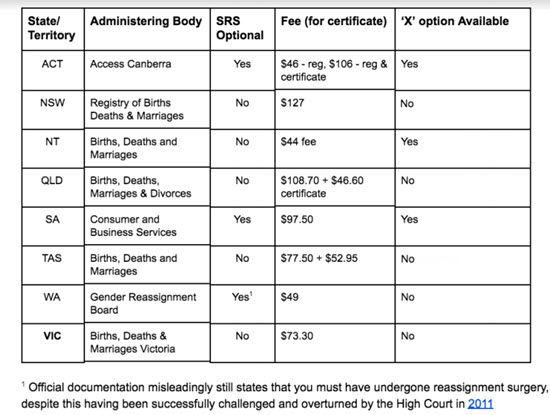 Even in cases where legislation provides clearer affirmative pathways, a doctor must still confirm that one is engaging in “appropriate clinical treatment” — something that varies between individuals. Some trans people feel best with hormonal and surgical changes to their bodies, while others feel most comfortable with no change at all, a position there is little legislative room for. When radical changes are posed, they’re shot down as impossible.

As Laurie noted, it’s an “attitude that ‘the system doesn’t allow for that’, like ‘the system’ is some giant immovable object.”

Should we have them at all?

As the red tape piles up around the country, it raises the question of what purpose sex markers on ID hold, and why we have them at all. Drivers’ licenses (many people’s primary form of ID) already don’t display the individual’s sex, as Queensland conservatives recently discovered.

The category of sex, while useful statistically, does little to help prove who we are, and in many cases only goes to make a marginalised community’s lives more difficult. Federal policy in consultation with trans and intersex groups could potentially cut through years of state machinations, let alone saving taxpayers a great deal in the process.

As laws that disenfranchise LGBTIQ+ people increasingly and inevitably go the way of the dodo, removing sex markers from ID altogether may not only be the right thing to do, it just might be the easiest.

* It is important to not conflate non-binary identities that are affirmed through the label X with intersex identities – an issue that often arises at a legislative level – an assumption that IHRA recognises as essentialist, transphobic and only goes to misgender many intersex people who are men and women.

The seedy rise and fall of John Elliott’s tottering empire

I am having difficulty keeping up with the 86 different genders. I guess a lot of children and adults will have difficulty with this as well as government!

You don’t have to keep up with all the different genders. The government merely has to remove the sex marker from identity documentation.

Actually YES did not ring out – 48.5% of voted that way and in many electorates the answer was resoundingly NO, 70%+ in “certain” areas.
Those who self exclude cannot whinge about being ignored.

We still have the absurdity in many States where currently married (under their birth assigned gender) transgender people cannot change their legal gender unless they get divorced…so much for marriage equality.

The requirement for GRS* for transgender women, steadily being dropped all over the world, excludes those transgender people who cannot for health related or (commonly) financial reasons have it.
This is especially unfair as neither State hospitals or Medicare cover GRS. It is a totally private procedure. Mine cost me $26,000 and even with private health coverage (and not all funds cover it) you are up for $10,000+.

This is because it is seen as a ‘cosmetic’ procedure at the same time as many State laws state that it is a legal requirement to change gender. This is contradictory, how can it be a ‘cosmetic’ procedure if it legally required? If this is seen as just ‘cosmetic’ why pick on GRS, when there are many gender confirming procedures that transgender people go through, such as electrolysis, breast reductions or implants, HRT, etc.

This requirement goes right back to the old idea that a transgender woman was expected (in fact it was a requirement by the old ‘gatekeepers’) to be male attracted and to be able to have heterosexual sex after they transitioned. At that time transgender men were simply not even recognised as existing (hence the confusion over them). Similarly surgery on intersex babies and infants has always been under the justification that it makes them more ‘suitable’ for heterosexual sex.

Not just transgender people being affected by this. This gets particularly challenging for those intersex people assigned an incorrect gender at birth, often with non consensual surgery being performed on them as a baby or infant, then trying to change their gender later and finding it impossible to meet the State requirements (even if they could afford it).

And this highlights yet another absurdity, non consensual GCS** is performed on many intersex babies and infants in State hospitals for free, yet the same intersex people who want to reverse it have to fund it themselves.

Any move that encourages the legal and social acceptance of a person for who they identify as without having to resort to major surgery is a good one.

Personally, I identify as a Betelguesian but alas, nobody will acknowledge my inalienable (…) right to do so and thus constantly oppress me by not making the traditional, Betelgeusian obeisance to my cultural needs.

I had to laugh at this. It all gets a bit much sometimes. On a serious note I’m uneasy with people cutting their healthy bodies up.

Apart from genital reassignment surgery for transgender women (been around for 80+ years and is a refashioning of genitals, not removal) no surgical or medical procedure undertaken by trans women, or trans men, is not done is far, far greater numbers by cis people for both medical and, more commonly, cosmetic reasons.

If you are concerned about this then you should first be objecting to
(a) The non-consensual surgery on intersex babies and infants (including clitoris reduction, sterilisation and vaginaplasty, etc).
(b) Those far greater number of cis people undertaking cosmetic medical and surgical procedures (botox, breast reduction, breast implants, facial surgery, vaginaplasty …and all the very many rest). To take just one example, more women in the US have breast implants every year than all the trans women that exist there (and is probably the same here in Australia).

It really does annoy trans people for being somehow criticised for having the exact same medical/surgical procedures that all so many cis people do … all without comment.

Im not sold on most of those surgical procedures, where you are sedated and go under the knife and there is no need. However I said I was uneasy not completely against and my definition of need is broad – it includes mental well-being.