New Caledonia is expected to maintain ties to France in its upcoming referendum, but it is marked by increasingly stark divisions.

Noumea was peaceful when French President Emmanuel Macron arrived for his first official visit last month. But in the early afternoon, cries echoed down the streets as about 20 indigenous Kanaks wielding banners marched through Place des Cocotiers, a park ringed by boutiques and cafes.

Macron was keen to win hearts and minds in the far flung South Pacific territory. One gesture was his formal return of the official deed by which France took colonial possession of the islands in 1853. While well received, the small group of protesters wanted the document handed directly to the Kanak people, rather than the government.

With the territory’s independence referendum set for November 4, the President’s itinerary focussed on the pro-independence heartlands in the North and Loyalty Island Provinces with visits to schools, villages and ceremonies of remembrance for lives lost during anti-colonial unrest in the 1980s.

New Caledonia is small and relatively wealthy with the highest human development in Melanesia. The territory possesses 25% of the world’s nickel reserves and the French government annually injects more than AU$1 billion to fund the public sector. But there are marked inequalities in the population of 278,000, with an estimated 29% of European heritage and 40% indigenous.

More than 30 years ago, conflict between Kanak activists — angered by land dispossession and disenfranchisement — and French forces engulfed New Caledonia, prompting the UN to relist it for decolonisation. Pledges of reform followed; the 1988 Matignon Accords and 1998 Noumea Accord guided policies to address disparities in indigenous and provincial development and prepared for greater territorial autonomy. The new political vision became “shared sovereignty” and a “common destiny” for everyone.

There has been progress over the past two decades, such as restoration of customary land, and greater Kanak participation in mainstream politics. The expansion of schools in rural areas, where more than 70% of people are Melanesian, has improved access to education.

“There is a very small hospital in each village now and there are primary schools everywhere. Also there has been a big development in roads … All that has happened in the last 20 years, and that has really changed things,” Catherine Ris, economics professor at the University of New Caledonia tells Crikey.

Yet Romain Hmeun, editor-in-chief at the pro-Independence radio station, Radio Djiido, claims that “many Kanak youth are unemployed, and there are always less Kanaks in many professions, like law, medicine and finance”.

While school intake has risen, few continue to university. About 5% of Kanaks graduated from higher education in 2014, compared to 1% in 1989, but this contrasts with 28% among the rest of the population. Low income has tipped many into vulnerable squatter housing in numerous urban settlements which are home to about 8,000-10,000 people.

“Our families are large and it is difficult to pay for all the children; sometimes it is possible to only put one child through education,” Leoneared Siejidre, a resident of a Koutio settlement, tells Crikey. He lives with his extended family in an improvised dwelling of corrugated iron and found materials.

The day after Macron’s arrival about 4000 people joined a patriotic “March for France” through the capital. Nearby, Bilo Railati, of Kanak and Fijian heritage, stood watching. He believes there has been change. “But we have not yet achieved social justice,” he emphasised.

Hmeun sees a continuation of disadvantage from past to present. The general unemployment rate of about 14% rises steeply to an estimated 38% for Melanesian youth. They have been at the centre of media reports in recent years about a rise in petty crimes with 60% committed by minors, according to authorities.

“Kanak youth have more access to information, maybe to education and training, but, ultimately, they consider themselves still marginalised,” he explained. “In the separatist milieu, the political parties have youth sections and do political training, but they also transmit the ‘painful history’ of the colonial past and present the project of independence as the way to transform the country.”

But in poorer areas like Nouvelle, an inner-city squatter community in Noumea where about 300 people live without clean water and sanitation, there is ambivalence to the referendum.

“We have asked our political representative for proper access to water for the last eight years and nothing has happened,” Joannes, a 35-year-old resident, recounted. “I won’t vote in the referendum because all the political parties are corrupt. We have had people in political power here for five, 10, 15 years and still nothing changes.”

A public opinion poll conducted in April this year by local market researcher, I-Scope, revealed that 22.5% of respondents supported independence, while a majority 59.7% were opposed and 17.8% were undecided.

In an era of global economic uncertainty, France’s financial support is not easily dismissed. The dramatic fall in commodity prices in recent years, for example, has been felt in New Caledonia’s nickel industry, diminishing export revenues and jeopardising mining sector jobs.

Yet veteran separatist leaders, such as Victor Tutugoro, President of the Melanesian Progressive Union (part of the Kanak and Socialist National Liberation Front) remain deeply convinced of independence as historical justice. He emphasises the party’s popularity and major voter base in the hinterlands. About 22% of the population live in the provinces.

However, a key variable is that voting isn’t compulsory in New Caledonia and past turnout has fluctuated, ranging below 70% and as low as 48% in last year’s French presidential election. Secessionists have long criticised the impact that European migration has had on an increasing indigenous minority. So their power to motivate urban and rural supporters at the ballot is vital to their cause.

They have a long fight ahead of them, as the November poll may not be final. A majority No vote would mobilise two further referendums up to 2021.

The complicated politics of a French defence treaty

New Caledonia: another powder-keg on our doorstep 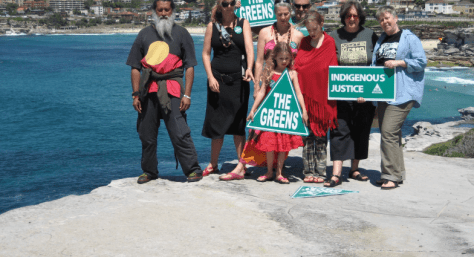 Greens go back to grassroots with Wentworth byelection

Thanks for an illuminating piece, Catherine. Makes sense that those people interviewed in Nouvelle wound feel that the question of independence is secondary to having basic necessities like running water. Reminds me a little bit of here where while of course Australia should become a republic, that question is by far secondary to social justice now for ATSI people (and indeed running water to the residents of whitegate in Alice Springs).