Prominent literary journal Meanjin has responded to calls that it was insensitive in the design of its #MeToo themed winter edition.

Meanjin called out for erasure, The Herald Sun plays fast and loose with its “exclusives”, radio host Terry Hansen signals his resignation due to health concerns, and other media tidbits of the day.

Green red in the face. Meanjin editor Jonathan Green and writers with bylines on the journal’s winter edition’s cover have apologised for the design on the front page, which crosses out the literary magazine’s name — the Turrbal word for the land now commonly known as Brisbane — to read “#MeToo”.

Amy McQuire was among the first to point out a problem with the design, “given the destruction of land, cultures and language is fundamentally tied to violence against Aboriginal women”. On Twitter, Karen Wyld stated the “whiteout of an Aboriginal word is so symbolic of white feminism on black country”. 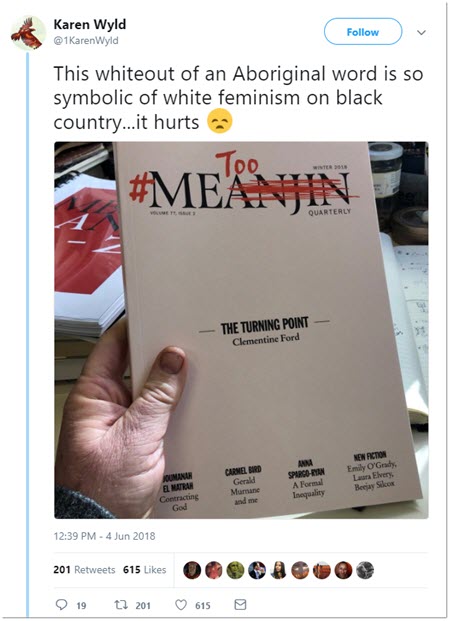 Green has since written a full apology for his “blindness”. “The word is more than just the name of a magazine, and it shouldn’t have been mine to obliterate in a design flourish.” Writers Anna Spargo-Ryan and Clementine Ford posted a statement on Twitter saying they would donate their payment for work published in the issue to a service that benefits Aboriginal women.

Exclusive watch. The team over at the AFL newsroom have spotted a familiar headline in today’s Herald Sun — the same as one of theirs from last week on a story about St Kilda Football Club coach Alan Richardson’s success rate. 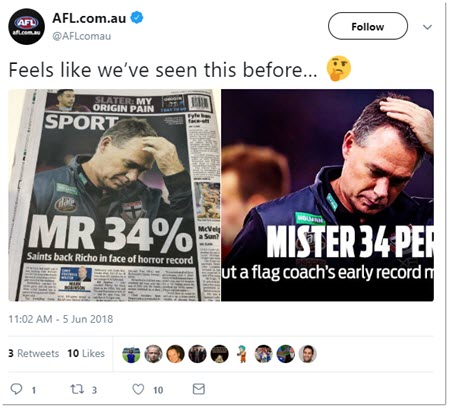 Hansen to depart 97.3FM. Brisbane radio host Terry Hansen has announced he’s leaving 97.3FM after 14 years due to “constant and debilitating fatigue”. Hansen told listeners of his breakfast show this morning he needed to put his health and family first on medical advice. He said he’d suffered a health emergency while on air last year, with swelling in an arm, and a doctor told him he’d compromised his health “to a point that any serious challenge to it could result in ongoing health problems”. He said he’d be leaving the show “quite soon”.

Bauer’s new mags. German magazine publisher Bauer, which owns the Australian Women’s Weekly, Woman’s Day, Gourmet Traveller, among other titles in Australia, has bought out some of News Corp’s home magazines. Bauer now owns Inside Out and Country Style, as well as homelife.com.au. In a statement announcing the sale, Bauer said the teams will move to their Park Street headquarters later this month.

The “Netflix of golf”. Australia will be one of the first markets where a new global sports streaming service, described as the “Netflix of golf”, will be available, starting January 1 next year. The service is being put together by Discovery, the US cable TV channel group controlled by John Malone’s Liberty Media. The deal — a US$2 billion, 12-year rights agreement with the US Professional Golfers Association will be available outside the US where NBC/Golf Channel and CBS own many of the rights. The deal with Discovery raises the prospect for a major rights brawl, with Discovery seeking to construct a domestic version of its global business. The new service will premiere in markets such as Australia, Canada, Italy, Japan, Netherlands, Russia and Spain starting on January 1, 2019. — Glenn Dyer

Glenn Dyer’s TV Ratings. A standard something-for-everyone night, without the distraction of a program like the Sunday Night interview with Joyce and Campion. Seven did not need that it to win total people and main channels, with House Rules continuing its improvement — 1.32 million national viewers and the most watched non-news program. Ten’s Masterchef had 1.13 million, though 850,000 in metros, a clear winner over House Rules which could only grab 786,000 viewers.

The Meanjin situation is ridiculous; the likes of the Australian and the Telegraph couldn’t have scripted a better example to use when they talk about professional victims, taking fake offence and so on to cover for their genuinely offensive dog-whistling crap.

There’s clearly no offence intended by Green. This is not an example of “privilege” or destruction of Aboriginal culture. It’s a crappy pun. If the title of the magazine was “Melbourne” and he did exactly the same cover design crossing out part of “Melbourne”, would the same people be howling about destruction of Western culture? Desecration of the name of Lord Melbourne?

Seriously you have to be looking for opportunities to be offended to have a go at this, and it’s a bit sad that Green and co feel they have to grovel to the most unproductive parts of the left over this, particularly the parts who seem to actively take offence at feminism (whether because fighting for female equality is racist, transphobic, colonialism or something else depends on the day of the week).

As always, identity politics eats itself and shows there is no “we”, only “me”.