Australia has some of the highest superannuation fees in the world -- so who charges them, where do they go, and what can we do?

One of the aspects of Australia’s superannuation industry that has drawn concern for some years now is the high level of fees, with Australians paying some of the highest fees in the OECD. The recent Productivity Commission report on the superannuation sector provides us with some independent insight into the nature of the problem.

How much are we paying?

Super fees are a vast industry that has made multi-millionaires and billionaires in Australia. Superannuation account holders pay around $30 billion a year in total fees. This includes just under $9 billion in direct fees. In 2016-17, that amounted to 1.1% of assets under management.

Who charges the highest fees?

Surprise! Retail super fund fees have been consistently more than twice as high as industry funds, although in 2017 this improved so that they were only nearly twice as much. But also smaller funds, whether industry, retail or other, have higher fees: 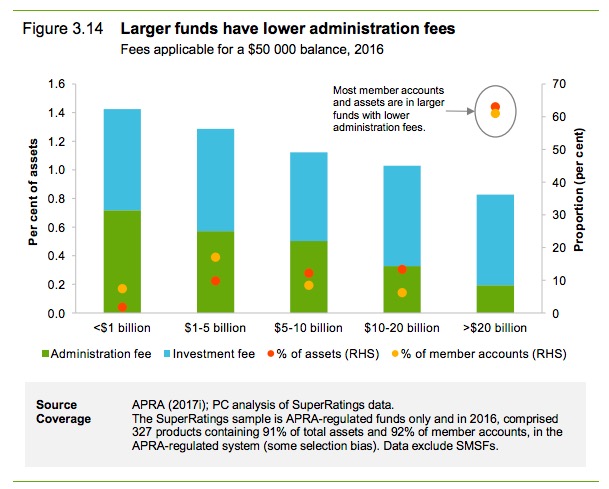 Which way are fees heading?

Since the financial crisis, down. In fact, they’ve fallen from 1.3-1.4% of assets to 1.1%. But that doesn’t mean the total amount of fees is falling — that’s growing, but more slowly than assets. The falls have primarily been in the retail sector, while the lower fees of the industry sector haven’t changed. While investment fees have declined only a little, administration fees are responsible for the decline. 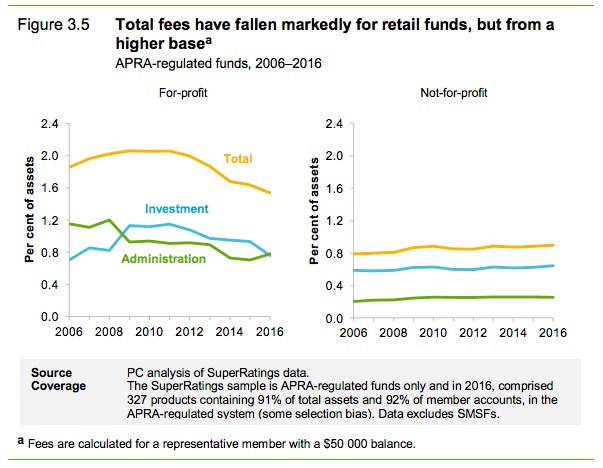 Do fees have anything to do with costs?

There are data problems here, but it seems costs have fallen as a proportion of assets, mainly because of falls in administration costs. However, “administration costs remain relatively high within the for-profit segment” and investment management costs have also fallen, as apparently they have in other countries in the aftermath of the financial crisis. There’s no correlation between high fees and good performance; “on average,” the commission finds, “funds that charge higher fees do not deliver better net returns to their members over time.”

Retirees pay more fees because they have bigger balances, but younger people in the accumulation phase pay more as a proportion of their assets under management. Retirees often have more complex products because they’re more actively managing their wealth, so they face higher fees for those. But fees for retirees have been declining, driven by lower investment management costs. The PC thinks this reflects retail and industry funds reacting to the rise of self-managed super funds.

Where do the fees go?

Administration and investment account for 71% of of fund service costs; administration is dominated by Link Group’s Australian Administration Services, to which 36% of all superannuation services are outsourced; the next biggest (at just a fifth the size of AAS) is Mercer. However, big funds are more likely to in-source administration or be able to extract lower fees from outsourcing providers.

The big banks dominate the investment management industry — they own their own super funds but also provide asset management services for other funds; the PC says “Macquarie, AMP, Commonwealth Bank and Westpac together control about 43% of the market by assets under management in the Australian market”. The PC also investigated the problem of related-party transactions (retail funds outsourcing services to their big bank owners, who charge higher fees than would be available in the market): there is some evidence that funds outsourcing to related parties pay higher fees, but the data quality is poor.

How can fees be reduced?

Well, that’s hard, and the PC doesn’t sound very hopeful. It wants smaller funds consolidated, and the sector to realise more economies of scale. But you still need competition. “This is not to say however, that the aim should necessarily be to have a system with very few funds. This would need to be balanced against the effects of a lack of competition from too few providers, insufficient product diversity or the costs of mergers that may be quite large.”

4 thoughts on “Why the hell are our superannuation fees so high?”