The art of the political interview: how to survive a bollocking from Barrie Cassidy

Wayne Swan, Nick Minchin and Anne Aly discuss courage under (journalistic) fire, and the dreaded He Who Shall Not Be Named (SPOILER: it's Laurie Oakes).

This is the second instalment in a mini-series. Read part one here.

As part of a healthy democracy, the political interview is where a politician’s image and legacy can be built-up and solidified — but it is also a place where it can be destroyed. April’s Insiders interview featuring Financial Services Minister Kelly O’Dwyer interview — in which she stonewalled and refused to concede the seemingly obvious point that the banking royal commission was long overdue — serves as a stark illustration of how sticking to the message can backfire.

“Ah, poor Kelly,” sighs former Howard government minister Nick Minchin. “Look, she obviously wasn’t at liberty to make the concession that the interview demanded she make. The government should have decided their communications strategy before that interview, before she went on. They had to say it was a mistake, it was a regret, but that was clear now, and they had done it. Instead they sent off Kelly where she really had to defend the indefensible.”

“As a minister, you necessarily have to toe the party line. When you’re a backbencher you have a lot more freedom to pursue your own line,” he pauses, and then laughs. “Some people don’t think you should, obviously. So with [O’Dwyer], the PM’s office will say, ‘this is the line, off you go, do your best’. And of course, then they get slated for that interview, and it’s a double blow for Kelly because she’s left looking a bit foolish when Turnbull comes out and says it probably was overdue the next day.”

Former treasurer and deputy prime minister Wayne Swan said the key to a successful interview was to be candid and prepared.

“You have to be straight as you possibly can be in the circumstances, which can be tough, because you don’t always know what the circumstances are until halfway through the interview,” he said. He cites Laurie Oakes as one of the toughest interviewers he faced.

“There was an interview after the 2009 budget, where we’d neglected to mention the deficit in the budget speech,” he said. “It was an honest error, but it was pretty hairy being grilled by him on that.”

Minchin agrees: “You had to be on your toes with Laurie Oakes in particular; because you always went on thinking ‘what does he know?'”

As a senior member of the tumultuous period of government between 2007 and 2013, Swan encountered more than his fair share of, shall we say, messaging challenges. First, as treasurer, he oversaw the stimulus package in response to the global financial crisis. He said effective messaging took a back seat to what they saw as the urgent necessity of the policy.

“We knew it was a risk politically, and given what an unpredictable time it was economically, that there was no guarantees,” he said. “But we also had no alternative.”

The policy was a tough sell — a fix that involved increasing spending and delaying election promises at a time when voters were understandably nervy.

But history seems to have largely vindicated the stimulus; Australia avoided recession, and the policy was endorsed by the RBA and, ultimately, by voters. This contrasts with the other major sales pitch of his time in government: the debate around climate change policy in Australia. Swan has described losing control of that debate as the great regret of his political career.

In a 2011 interview with Heather Ewart on 7.30, Julia Gillard made an ill-advised concession that set the ball rolling against her government and the “carbon tax”. 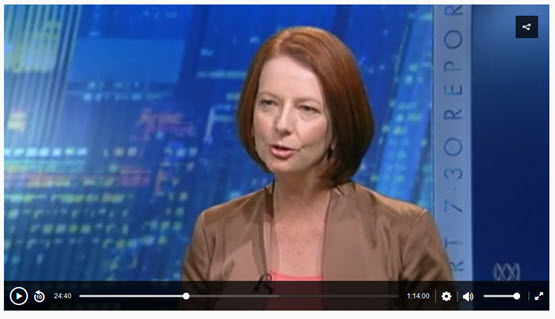 “Part of the problem of course was Julia [Gillard] saying ‘if you want to call it a carbon tax, sure, go ahead’ — that gave the right wing in politics and the media everything they needed to run the policy into the ground,” Swan said. “But we really lost control of the debate because big money in Australia decided they didn’t want to pay it and put everything into fighting it.”

Member for Cowan, Dr Anne Aly, who has recently moved into politics following a long career in academia, says the adversarial nature of political interviewing came as something of a shock.

“I find it very challenging when you’re thrown into a situation, particularly when it’s with someone from the other side and it’s sort of designed to be adversarial,” she said. “I think the polity is craving a move away from that, because at the moment it does seem like we just talk in three-word slogans and soundbites.”

Aly is diplomatic when asked whether the media makes this worse.

“You just have to use language well to give yourself the best chance of getting your message to your audience,” said Minchin. “And that will be different on the ABC than it will, as a Liberal, when you’re on Sky, where you have a bit more of a captive audience. But that’s not a reason to say no to interviews. I never understood people who said they won’t go on this show or that show. I mean, as a centre-right figure, the ABC gives you an audience you wouldn’t otherwise have.”

Swan said the art of political interviewing was dying, certainly in its more traditional forms.

“There are fewer and fewer opportunities for long form, in depth interviews,” he said. “Podcasts are good, they give you a real chance to lay down your values. But, particularly in print, for centre-left figures, there are very few places they can go.”

NEXT: Crikey’s guide to the best and worst political interviews in Australia history.

Do MPs really know what it is like to deal with Centrelink?

The 2016 Crikeys: Arsehat, Person of the Year and Sexiest Pollies are …

We can look forward to the times when it is Big Money in the hot seat, being grilled about their responsibilities, after each nasty climatic disaster that has been compounded by their neglect.