This year's Logie nominations have raised a few eyebrows across the media world, with calls that ABC journalists have been snubbed.

Ruffled feathers over Logie noms, Media Watch leaves something to be desired, Trump’s tabloid advantage, and other media tidbits of the day.

The Logie goes to who? The Logie nominations released over the weekend have raised some eyebrows, not least because of the lacklustre list of nominees for the Gold Logie, which includes Foxtel’s Andrew Winter (who?). A Current Affair’s nomination in the outstanding news coverage or public affairs category for Tracy Grimshaw’s tough interview with Don Burke has ruffled some feathers. Especially given that the ABC, with Fairfax, did the legwork and broke the story of allegations of bullying and inappropriate behaviour against the former TV star. The ABC received nominations in the same category for its Four Corners reports on the Lindt Cafe seige and the Murray-Darling Basin. Logie nominees for each category are decided from entries put forward by each network, but Crikey understands that the ABC did include its Don Burke story for consideration.

Media Watch has been told the mayor boasted about his influence over the paper and threatened to withdraw advertising dollars if journalists did not fall into line. So is that why Chapman — who is no longer in journalism — was such a sycophantic supporter? Well, we don’t know, because he did not respond to our calls, texts or emails. But what we do know is it’s the media’s job to keep a critical eye on the people in power. And Queensland Times failed in its duty to do that.

And so did the then-owners of the Queensland Times, who did not appear in the Media Watch report: APN News & Media, now known as Here, There & Everywhere (or HT&E Ltd). It sold the paper (and other dailies in northern NSW and regional Queensland) to News Corp in 2016 in a process that had the eventual approval by competition regulator ACCC. The former APN papers are now in a group at News called ARM, or Australian Regional Media.

One of the unanswered points about the performance of Chapman is how he was allowed to get away with partisanship and poor editing (and miserable journalism) for so long — you may think that viewers would have wanted to know what former owners and current management had to say on the matter (if anything). — Glenn Dyer

Origin begins. Prepare for a whole lot of State of Origin content in New South Wales and Queensland. Both states have named their teams for the annual rugby league competition between the two states, and the Daily Telegraph and Courier Mail have already shown their usual enthusiasm for the competition today with the teams on their front and back pages today. 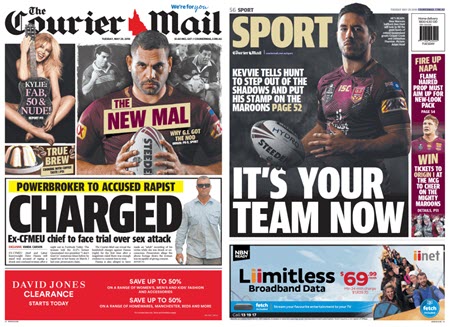 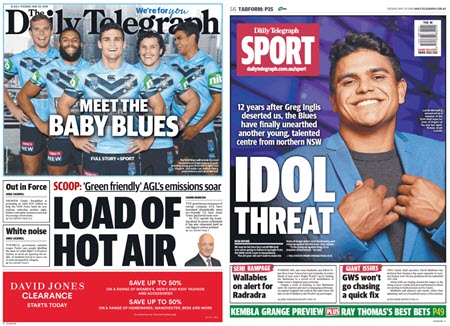 Trump’s gossipy best friend. The Daily Beast has taken a deep dive into US President Donald Trump’s friendship with the founder of mega-gossip website TMZ, and how their relationship has paid off for both of them:

When the Access Hollywood tape of Donald Trump emerged in the home stretch of the 2016 election, it should have been a gift from the tabloid gods for TMZ. Instead, the celebrity gossip website went into overdrive to help Trump … It shouldn’t have been a surprise: it was the result of a cozy relationship between TMZ founder and boss Harvey Levin and Trump, who called each other throughout the campaign, seven sources told The Daily Beast.

Glenn Dyer’s TV Ratings. Seven won total people and the main channels, and Ten won all the demos. Nine was left right out. Talkin’ Bout Your Generation is flopping, just as it did in its final season on Ten a few years ago. It had 830,000 national viewers last night, down 139,000 from a week earlier — and a thumbs down from the audience. Have You Been Paying Attention on Ten starred with 1.08 million viewers nationally — up from 1.07 million a week ago — a big contrast to Talkin on Nine. Seven’s The Mentor is fading — 646,000 nationally after House Rules — that’s a near 50% loss of audience, and could be fatal.

“But what we do know is it’s the media’s job to keep a critical eye on the people in power. And Queensland Times failed in its duty to do that.”
WTF is Media Watch on? When are they going to run the same tape over Limited News – and run the risk of upsetting Rupert and his Limited News Party government?
Are they going to take a swing at the Courier Mail on the same lees :- for it’s lethargy to “investigate” and prosecute what’s been going on in Logan (similarly adjoining Brisbane as Ipswich) and the Gold Coast when it comes to “questionable” administration and “funny deals between mayors and developer/donors” – Liberal fiefdoms : contasting with it’s alacrity in Ipswich’s Labor mayoralty?
Or it’s one-sided PR campaigns during the Newman government?
Or this Federal Limited News Party government?
The way it handles sunshine PR for Adani, and the Limited News Party, ignoring embarrassing news that might have an otherwise negative impact on it’s attempt to influence punter perceptions, to vote for it – or else mitigating such negative PR news by comparing it favourably to something Labor has done in the past (while refusing to reciprocate on Labor bloopers)?
Media watch my arse!