Sky News has made snapped up a deal for broadcasting daily content on WIN.

Sky News makes a move to broadcast on WIN, Grant Denyer set to battle Tracy Grimshaw for a Gold Logie, and other media tidbits of the day.

Sky’s WIN deal. Much noise this morning (and a “scoop” in the media pages of The Australian) from Sky News and WIN (owned by Bermuda-based Bruce Gordon) about a deal that will see some Sky content broadcast on WIN each day.

But this is really a judgement by WIN about the impaired capacity of the Ten Network (WIN is Ten’s regional affiliate) to supply an up-to-date news service. News is not a high priority for Ten and its new owners, CBS. News was seen as a cost-cut, and there had been plans drawn up between Sky and the News Corp/Lachlan Murdoch interests for a news service to be provided to Ten once the Murdoch family had gained control.

This deal is a cost effective way for WIN, which is struggling thanks to Ten’s low ratings, to improve its news offering to viewers. Rivals Seven (which dominate regional news) and Nine have far more comprehensive news offerings each day, especially in breakfast and from late afternoon onwards. The ABC’s News channel also has a solid following in regional Australia, where Sky doesn’t. — Glenn Dyer

Logies shortlist announced. Nominees have been announced for Australian television’s night of nights, the Logies, to be held for the first time on the Gold Coast. Included in the finalists for the biggest honour, the Gold Logie, are Grant Denyer (whose Family Feud on Ten was recently axed), A Current Affair‘s Tracy Grimshaw and The Living Room’s Amanda Keller.

The revolving door. Two of the ABC’s correspondents in the Pacific region are moving further afield, to take up Middle East correspondent jobs. Papua New Guinea correspondent Eric Tlozek and south-east Asia correspondent Adam Harvey have been appointed as the broadcaster’s new Middle East reporters, replacing Sophie O’Neill, who has returned to Australia to work on Four Corners, and Matt Brown, whose new role hasn’t been announced. Tlozek will be based in Jerusalem, and Harvey in Beirut.

Also at the ABC, the head of distribution in the entertainment and specialist division Rebecca Heap is leaving in June. She joined the ABC in 2014 and has had the responsibility for the ABC’s TV channels, iView and a suite of children’s digital products since 2016, and added the ABC listen app and RN to her portfolio in February. 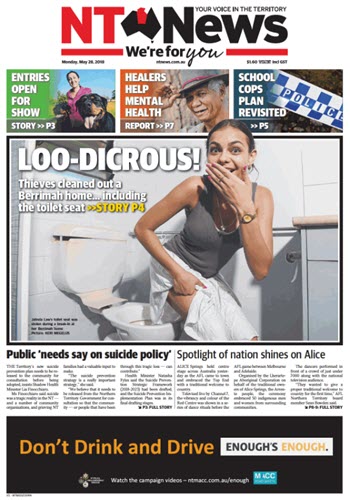 Glenn Dyer’s TV Ratings. Nine’s night, winning total people, the main channels and the main demos. End of night! Seven’s The Voice was the most watched non-news program with 1.27 million national viewers, with The Voice from Nine next with 1.26 million and MasterChef Australia from Ten on 1.19 million. All OK figures, although a shadow of their former glories. In the morning, Insiders with 517,000 national viewers was easily the most watched program.

Sky News on Ten? … mid-year Walkleys … Trudeau for (US) president …

“Sky News makes a move to broadcast on WIN”

Thanks to Team Xenophon the Murdoch filth will flow even more feely from all media genres.