Who is offering cash to be a News Corp source?

Paying for sources is usually frowned upon in Australian journalism. So who is behind the mystery post by a "News Limited" journalist?

Someone claiming to be a “News Limited” journalist is fishing for a case-study on a crowd sourcing website, and they’re even paying for it.

A post on Source Bottle — a website that lets journalists and writers call-out for sources — was tweeted out by the site’s account on Tuesday. It asked for anyone who’d been sacked by Newcastle Permanent Building Society. That in itself wasn’t particularly unusual — posts apparently from Nine’s 60 Minutes and Fairfax Media are also currently calling out for sources related to Newcastle Permanent.

But what piqued our interest was the promise that sources would be paid — something that is very unusual for daily news, and not offered by the other two outlets looking for sources on the same story. 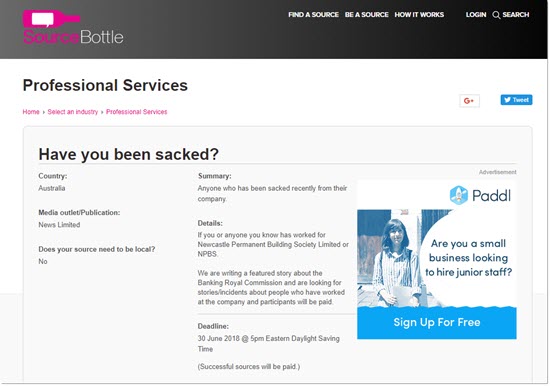 News Corp (previously called “News Limited”, as in the post) only has two major daily newspapers that Crikey thought likely to be covering a building society in Newcastle, NSW. So we asked Daily Telegraph editor Chris Dore if any of his journalists were behind the post.

He said it wasn’t the Tele, and, “we don’t ever pay people for stories”.

So we checked in with The Oz. Managing editor Helen Trinca said: “This is not from The Australian. We do not pay sources for information.”

So does the website itself know who it was?

A spokesperson for Source Bottle said the site operates on “an honesty basis”. The statement said most journalists were regulars who used personal email addresses that Source Bottle recognised. “Since many of the journalists who use the service are freelancers, they won’t necessarily be a representative of the particular media outlet,” it said.

“[We] have found that subscribers hold our writers/journalists to a high standard and will notify us of any concerns they have with a post/poster (which we then follow up). However, we’re not aware of people falsely claiming to be from certain publications.”

The statement did not directly address Crikey’s question as to whether they check the authenticity of posts.

The site was built by self-proclaimed “mumpreneur” Bec Derrington in 2009 and describes itself as a way for journalists and bloggers to find sources and providing “PR professionals and subject-matter experts with timely insight into publicity opportunities to help them gain brand awareness for their clients’ products and services or themselves”.