World media may have gone overboard on royal wedding coverage

The marriage of Prince Harry and Meghan Markle drew tens of millions of viewers and an absurd number of newspaper lift-outs. Here's how it went down around the globe.

Harry and Meghan gave the greatest gift of all to the world’s media with their wedding on Saturday: content.

At home, Sydney’s Daily Telegraph followed up the Sunday Telegraph’s 24-page lift-out with another 12-page lift-out today, including a souvenir poster. The Herald Sun in Melbourne had four pages today, and a 24-page lift out yesterday. The NT News, of course, went for the cheekiest cover photo for its Sunday paper, the Sunday Territorian.

That’s nothing compared to the UK papers — most of them had special souvenir lift outs in Sunday’s papers, and some had more today. The Mail on Sunday boasted on its front page yesterday of “47 glorious pages” of coverage, and the Sunday Express had 128 pages. The Daily Mail had 32 pages today, The Times has 16 pages, 18 pages in The Sun, 12 in the Daily Express and the Metro. 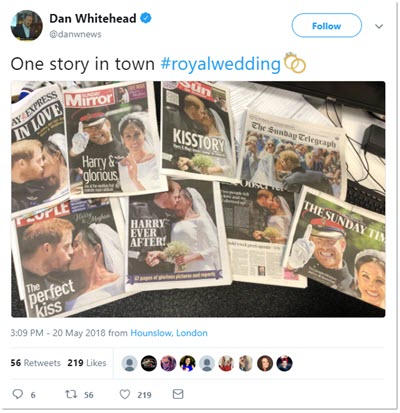 And it looks like interest hasn’t waned. The most-read news website in Australia, News Corp’s news.com.au, was dominated this morning with royal wedding “stories” (including the top story, and full stories about a James Blunt tweet, Princess Diana’s niece Lady Kitty Spencer and a meme about Prince Harry’s ex-girlfriend and wedding guest Chelsy Davy). And those stories are only there because people are clicking on them: 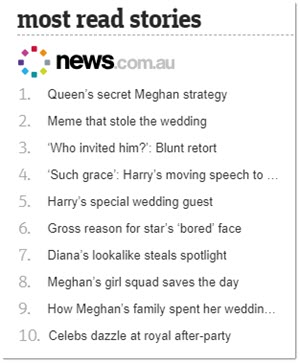 On the night itself, 5.7 million people watched on free-to-air TV, and it will prove to be the most-watched program on Australian TV this year — the AFL and NRL grand finals will not come near it, nor will the three State of Origin games starting next month.

Seven had 2.58 million viewers who watched its main and digital channels. It was so popular that the audience average was slightly more than the UK’s commercial network ITV, which had about 2.5 million viewers. And that’s despite its own commentators getting so caught up in wedding fever at one point they turned their backs to the camera to get a glimpse of the happy couple. 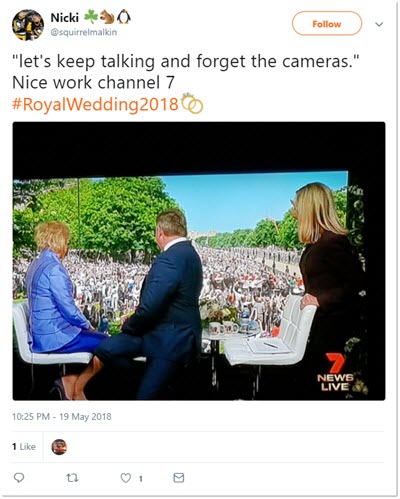 (To be fair, it was a distraction that CNN’s team of anchors also succumbed to.)

Nine’s audience averaged 1.89 million nationally, the ABC, 813,000 and SBS with 191,000. Seven’s average share for prime time on Saturday night was 44.3%. Ten’s was 6%, with its main channel share just 3.4%, a record all-time low. The ABC’s numbers dropped off substantially at 8.45pm — they were running a pre-recorded package as Princes Harry and William arrived at the church.

And at the other public broadcaster, comedian Joel Creasey had to abandon his post as one of three commentators based in Sydney (with Myf Warhurst and Ray Martin) because, as he tweeted, and confirmed by SBS, the pool footage of the ceremony can’t be used in entertainment or comedy programs. It was a condition of broadcast that US cable network HBO got around for its comedic commentary team of Will Ferrell and Molly Shannon by simply not using the footage of the ceremony itself.

UK viewing was dominated by the BBC, which had 8.7 million viewers (of an 18 million average across the country) across the whole ceremony and a peak of 13.1 million for the actual service. The Royal Wedding whacked the FA Cup which was broadcast in the early evening on Saturday in the UK. The 18 million average, though, was less than the more than 27 million who watched Prince William marry Catherine Middleton on April 29, 2011.

In the US, Meghan Markle’s presence boosted the audience to more than 22.4 million according to first figures on Sunday. NBC led with around 6.42 million viewers, followed by ABC with 6.38 million. Another 4.8 million viewers watched on the big three cable news networks: Fox News led with 2 million, followed by CNN with 1.8 million and almost a million for MSNBC. Deadline has done a full break-down of the US’ breathless coverage. Final figures might push the total audience past the almost 23 million who watched Will’s and Catherine’s hitchin’.