A huge expose from Reclaim Australia. No crisis at the NMA. Plus: oh lordy, that is not what 'Hallelujah' is about...

Reclaim Australia reveal the insidious rot at the heart of Australian Unions. Concerns over staffing at the National Museum of Australia. Plus: Israeli dignitaries continue the religious tradition of reading no further than the title of Leonard Cohen’s ‘Hallelujah’.

Museum exhibits no concern over staffing levels. What’s going on at the National Museum of Australia? A tipster got in contact to say the museum is shedding staff, with a focus on curatorial roles. “The excuse is to save money, but at the same time it announced a multi-million dollar expansion plan and increased senior executives positions,” they said. “The museum is also predicting a $1 million overspend.”

We got in contact with the NMA, but they assured us there was nothing to it. Since the beginning of the year, 15 people had left — which the NMA said was made up of voluntary redundancies, retirement, end of the term of an on-ongoing contract or transfer and thus, there were no out and out “dismissals”. Over that time, 20 people had been hired. A spokesperson further stated there was no plan to reduce curatorial staff, and that the museum would not be in deficit at the end of financial year 2017-2018.

Huge if true. You don’t get much past the patriots of Reclaim Australia. The relentless creep of Sharia law in this country, ignored by so many, is assiduously documented on their Facebook page. But yesterday they came upon perhaps an evening bigger scandal. Sharing a video of members of the Maritime Union of Australia expressing their solidarity with the people of Palestine following the harrowing events of last week, they noticed something amiss. They sum it up with stark clarity — and you may want to take a seat — “the left have infiltrated the unions”. 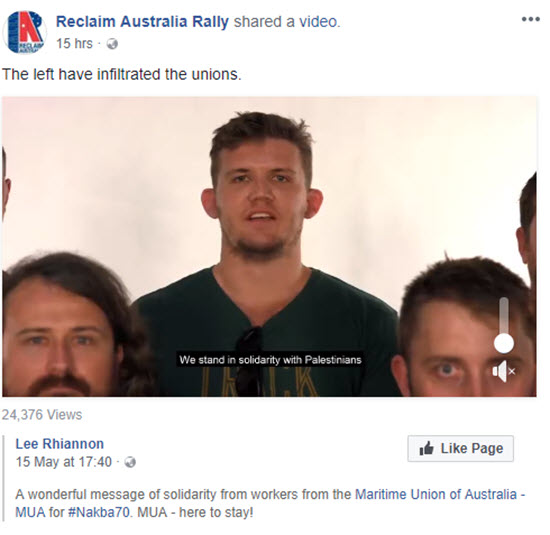 Oh, lord… The Financial Times reported on Tuesday: “At the embassy opening in Jerusalem, US officials, including Donald Trump’s daughter Ivanka and her husband Jared Kushner, mingled with Israeli prime minister Benjamin Netanyahu and other dignitaries as a musician sang a Hebrew version of ‘Hallelujah’.” Thus they have added to the seemingly inexhaustible number of inappropriately wholesome uses of the late Leonard Cohen’s secular (and highly suggestive) hymn.

Consider the lyrics “Remember when I moved in you/and the holy dove was moving too/and every breath we drew/was hallelujah” — if you’re somehow unfamiliar with the song, it’s full of allusions of this sort. Transcendent? Absolutely. Concerning the scripture? Ms Tips would venture it is not.

Apparently religious authorities frequently don’t read any further that the title on the lyrics sheet. This was also the song chosen to be sung at the Catholic Church’s World Youth Day in Sydney in 2008 attended by Pope Benedict.

Revolução dos Cravos. Last week gave us “woke” accountants, this week gives us class warrior horticulture. Melbourne’s Fitzroy Nursery is offering a “give a banker a hug” sale. They proclaim their belief in the “code of misconduct pioneered by the financial services” and tell bankers they will be sold “products you don’t need, [and] can’t afford” along with a “BIG hug”: 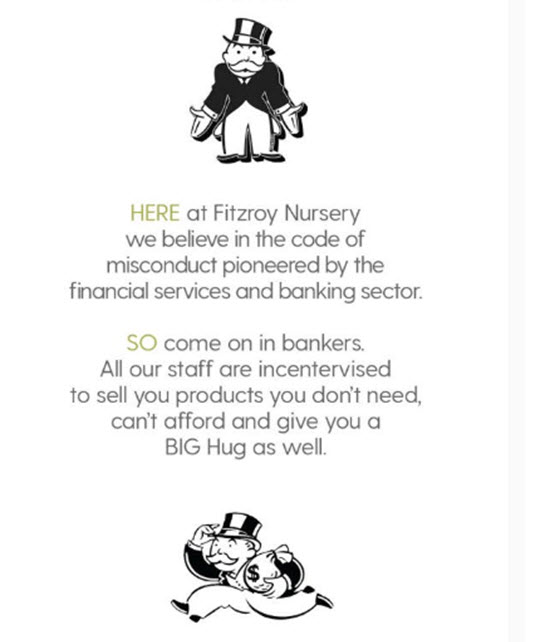 It is not the first time Fitzroy Nursery has tied its promotions to the news cycle — in November 2017 they held a “big hair sale” to mark the ascension of Donald Trump to president elect. Their front choice and bawdy puns were equally worthy of mockery and derision: 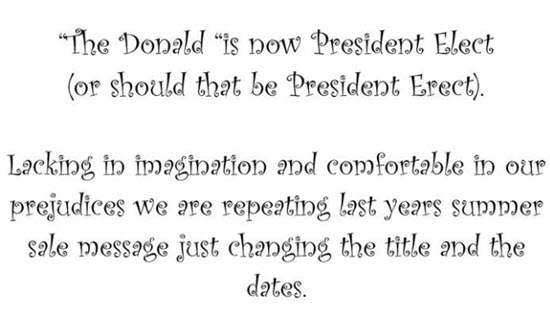 And back in November 2016, they wrote a slightly gratuitously mean blog post on fungus gnats, calling them “the Christopher Pyne of the bug world”. Politically engaged gardeners? Ms Tips hopes your reputation is growing! 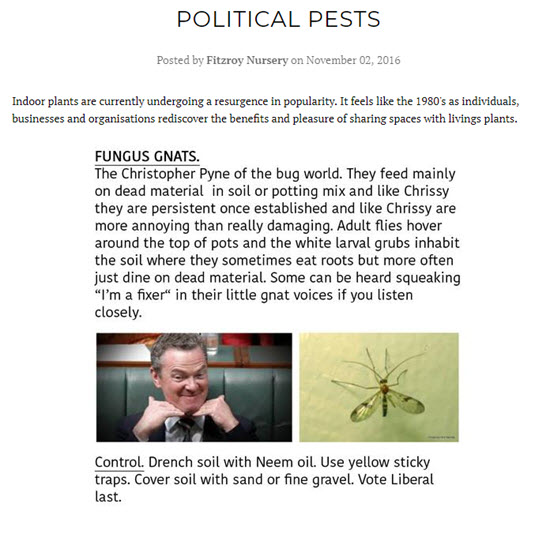 No grants for gaming

The Song of Songs always wrong-foots the Scripture-minded prigs.