The art of the political interview: the interrogators reveal their hand

How do you break down obstinate stonewalling? How do you catch an evasive pollie? Find out, in part one of our brand-new mini-series.

This is the first in a multi-part mini-series on the art of the political interview. The entire series will be collected here.

On April 22 this year, Financial Services Minister Kelly O’Dwyer sat down with Barrie Cassidy on ABC’s Insiders. After years of damning reports about banking practices and calls from both their left and right, her government had bowed and established a royal commission. It was roughly a week into the second round of public hearings, which were revealing scandals that shocked even seasoned financial journalists. What Cassidy wanted — as, one would assume, did a sizeable portion of his audience — was the admission that the government should have, at the very least, put the commission in place earlier.

O’Dwyer was not going to give him that.

CASSIDY: I think I gave you an opportunity to answer the question, you didn’t. Were you wrong to delay it as long as you did?

O’DWYER: Look, Barrie, I have answered your question.

CASSIDY: No, you haven’t.

O’DWYER: We have in fact established…

CASSIDY: You have established it but it took a long time coming. Were you wrong?

O’DWYER: Well let me put it to you this way: We would not have done all those other things that we have otherwise done to address these…

CASSIDY:  Alright let me put it another way then, because clearly I’m not getting a direct answer on that….

Cassidy ended up asking the same question five times. The interview made headlines across Australia.

“I didn’t necessarily smell blood, but I smelled vulnerability. And it surprised me,” Cassidy told Crikey. “I presumed she would find a form of words to put the issue away: ‘Yes in retrospect we were slow to call the royal commission, but now it’s up and running we can guarantee the electorate that they’ll get a result.’ I think they feared that such an admission would leave them vulnerable to Labor Party attacks, but I believe the opposite was true.” 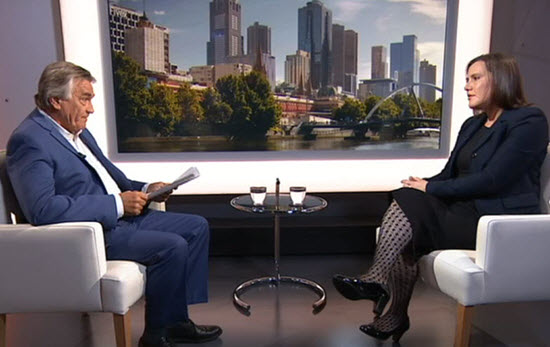 O’Dwyer’s stonewalling is just one a range of techniques employed by our elected officials to escape that kind of scrutiny. Another is to starve an interviewer of perhaps their most precious resource; preparation.

“Doing radio, you might get a call at 7.15 that morning saying  ‘the Prime Minister will talk to you this morning for five minutes’. So you gotta be on top of your brief as much as you can,” veteran broadcaster Mike Carlton told Crikey. “They often do that deliberately to catch you off guard; it’s an old trick.”

Political editor for The Advertiser Tory Shepherd said the same tactic was employed with print journalists. “You ask to speak to the minister, or submit your questions and they string you along, and then at the end of the day, or just before deadline they say ‘here’s two items that don’t really answer what you asked’. And you just don’t have time to properly interrogate it.”

“Meet the Press was live, and a canny operator like Ruddock knew how to exploit that,” he said. “He knew if he didn’t want to answer he could just give an interminable answer, and then keep giving it and giving it.”

Ruddock bet on the fact that eventually the dictates of live broadcast meant the interviewer would just have to move on. In opposition to this, interviewers have to develop ways of prying off the mask.

“Rookie interviewers often think that political interviews have to be combative; you’ve gotta get in there, get the killer blow,” Carlton said.”The aggressive interview often rebounds on the interviewer —  you make yourself look a complete prick, in fact, as if you’re trying too hard. You’re better to tease them out, and then land the killer blow if need be.

The other technique is one I learned from Mike Willesee — the long pregnant pause, you look at the politician with arrant disbelief and just sit there silently. They get nervous and flustered and they will often blabber something they hadn’t intended to.”

Our interrogators all agreed that, with shrinking newsrooms, partisan attacks on the ABC and the proliferation of media managers, the long form interview, particularly in broadcast, is in a bad way.

“There are very few long form political interviews of any quality now,” Carlton said. “You might see them on the ABC, but I don’t remember the last time I saw one on commercial television. In commercial radio it’s just dead, it’s fossilised.”

He blames this on the cult of personality around broadcasters like Alan Jones and Ray Hadley. “There’s no interviewing as such, people tune in to hear Jones pour honey on some favoured subject like Tony Abbott, or to hear someone disagreeing and getting abused up hill and down dale.”

Cassidy, the man who grilled O’Dwyer, was slightly more upbeat.

“There are still programs that feature an interview and allow plenty of time for the presenter to prepare, though they’re mainly on the ABC,”  he offers by way of qualified optimism. ” I do feel for some radio presenters who occasionally have interviews sprung on them at short notice and have to do the best they can based on what they’ve stored away. And I admire David Speers at Sky who has been known to get an excellent result even though he’s churning through them at a rate of knots.”

Stay tuned for the next part of our series featuring the subjects of these interviews: the politicians.

Do you think the art of the political interview is dying? Which interviewers do you think are getting the job done? Write to us at [email protected]

Media Files: the cost of the Mirabella defamation case

Why so shy, Michaelia?

Save Our Super crowd is everything ugly about Australian politics

I do not think the ‘art’ of political interviewing is dying. I think, though, that the education of politicians by media consultants has made it increasingly difficult for interviewers to conduct one. Those in ‘listener/viewer land’ still crave to hear politicians being held to account but it has become–in the minds of the political class–thoroughly inexpedient to coherently explain themselves. This is because they fear the inevitable attack from the other side. Politicians nowadays are fearful people and are–almost without exception–utterly incapable of articulating a COGENT response to scaremongering from their political adversaries. So captive are they to the ‘other side’, they no longer speak to or for the citizens. Batting for their team is more vital than representing the constituency.

“Do you think the art of the political interview is dying?” Possibly. But I do think the number of interviewers available; who have access to a regional, state or national platform, free to exercise their art . . . are all but extinct. Being an incisive, experienced interviewer is but one cog of the wheel. That is why an independent ABC is ESSENTIAL to both parliamentary and civil health of our nation. And we are losing both . . .

COULDN’T AGREE MORE ABOUT THE ABC!!!!! iNTERVIEWERS – NOT RAY HADLEY OR ALAN JONES THANKS. THEY JUST SPEW THEIR PIFFLE!

The interviewers could do better in following up when the politician gives the standard talking points in response to a question.
Try to get them to expand on their stock response.
For instance if the Minister says we are on track to achieve our commitments on climate change, the next question could be – so how much have our emissions reduced in the last year? Instead they too often have a follow up question which allows the politician to repeat the talking points.

There’s always the risk of making ones assessments through partisan eyes: interviewers are never tough enough on the politicians one disagrees with and just rude and aggressive to representatives from ones own side of the aisle. Nevertheless, I’m not sure the “gotcha” style you describe merely applies to Rookie interviewers. The ABC 7.30 host has been around some time now and still seems wedded to this technique (a bi-partisan offender in my view) and regrettably not a patch on former hosts of a program that had previously been an evening fixture for me; I only ever watch nowadays if there’s a guest host.