The Herald Sun has incorrectly identified a picture of a young girl who died in a road accident in Melbourne. And other media tidbits of the day.

The worst kind of mistake. The Herald Sun has apologised to the family of a teenager killed in a truck crash, after incorrectly identifying a picture of her sister in its front page photograph today. Aivy Nguyen, 14, was killed in Melbourne yesterday when she was hit by a truck. On the Sun’s front page, a picture that was captioned as being of Aivy and her mother, had actually cropped Aivy out and showed her sister and mother. 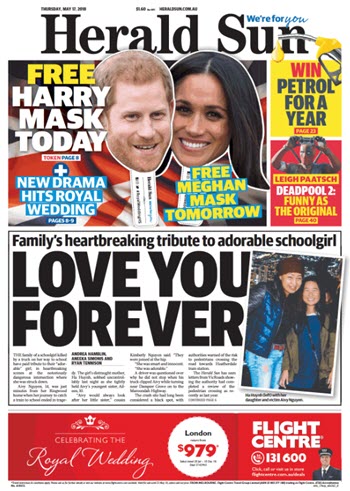 Herald Sun editor Damon Johnston told Crikey there would be a correction published tomorrow, and that they had already apologised to the family directly. “The photo that appeared in our second edition was provided to the reporter by the mother of the victim, Aivy Nguyen,” he said. “Unfortunately, as the photo was supplied a misunderstanding occurred about the identity of Aivy in the photo, and this resulted in us incorrectly identifying her.”

Good feud guide. The Daily Telegraph has removed an article from its site about the ABC’s royal wedding costs after the broadcaster came out swinging over a story that claimed presenters flew to London in business class seats on the taxpayer dime. The story, by Matthew Benns, said Annabel Crabb and Jeremy Fernandez had “jetted into London yesterday on taxpayer-funded business class flights”, and spent the day “posing for selfies outside Buckingham Palace and hunting for ‘trashy’ royal wedding souvenirs”. The story was quickly picked up by Daily Mail Australia and 2GB broadcaster Ray Hadley in his interview with Immigration Minister Peter Dutton.

In its response this morning, the ABC said it had asked for a retraction, saying that the ABC paid for economy class travel. Tele editor Chris Dore didn’t respond to our request for comment before deadline.

Tele’s statue beat-up not based on ‘fact’. Below the Tele’s ABC beat-up today, it has published an adjudication from the Australian Press Council finding that its beat-up last year about the “groundswell of PC activists” wanting to “tear down or alter” Sydney’s statues was not supported by any of the quotes or material in the article. “There is nothing in the article that could reasonably justify the statements in question, especially the reference to a ‘groundswell of PC activists’,” the decision said. The article was based on a column by ABC journalist Stan Grant, who hadn’t proposed removing statues (which was noted by the Tele).

The article was written by the very same Matthew Benns responsible for the aforementioned ABC business class travel yarn which was published today.

ABC getting quizzical. We’re not sure where The Australian gets the idea that the ABC is trying to be more like BuzzFeed. In the past two days, the ABC’s Facebook Messenger news bot has branched out from its weekly news quizzes, with two quizzes related to Saturday’s Royal Wedding: the first, yesterday, worked out your “aristocratic name”, the gift you’d buy the happy couple and who you’d be sitting next to. 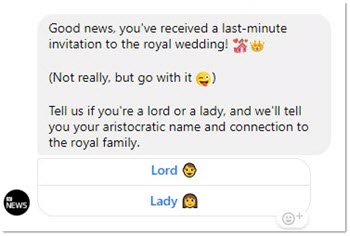 And then, this morning another quiz — this time a test of whether you can tell your chickens from your fascinators.

This correspondent (Lady Elizabeth Willoughby), of course, did both, earning the poultry score of four out of seven on chicken quiz.

Fox lawsuits settled for US$10 million. To add to last year’s US$50 million lawsuit settlements, 21st Century Fox has had to settle a new swath of legal claims regarding gender and racial discrimination, adding up to $10 million. The claims were “arising out of allegations of sexual harassment and discrimination at the company’s Fox News Channel business”, the company has said in a filing to the US Securities and Exchange Commission. — Glenn Dyer

Glenn Dyer’s TV ratings. Seven won total people and all the major demos, Nine won the main channels. MasterChef weakened for Ten (1.04 million viewers nationally), House Rules lifted a little for Seven (1.11 million nationally). Young Sheldon struggled for Nine at 7.30pm with 1 million nationally — a third down on the debut earlier in the year. The ABC’s 8pm to 9.40pm slots did well — Julia Zemiro’s Home Delivery averaged 876,000, Gruen had 1.07 million around 9.10pm and The Weekly With Charlie Pickering had 909,000 after that.

“The article was written by the very same Matthew Benns ”

You guys already wrote that series about The Australian, why not bite the bullet and just start referring to people like Benns as propagandists. It’s no accident that these mistakes are all in the direction of demonising The Australian’s ideological enemies, and any correction or takedown is quiet and comes long after the story has escaped onto radio, Twitter, Facebook etc and misinformed The Australian’s audience yet again.

As pointed out by Arky, this “errors/mistakes” are not a bug but a feature, it is the aim & sole intent of the mudorc.