Another 20,000 words on the Trinity Grammar haircut?

Crikey readers respond to the media's coverage of the Trinity Grammar haircut, plus the ongoing war with the ABC.

The irony of running a story about how many stories have been written on the controversial haircut at Trinity Grammar was not lost on us yesterday, but it was certainly a fair point raised by some readers! That being said, the topic did provoke more general discussion about the story’s news interest; maybe Australia’s not so done with it after all.

On Australia’s most fascinating haircut

Ken Gratton writes: Part of the reason this story has had “legs” is because it affects the reader in so different many ways, especially if the reader happens to be a parent. We celebrate, for instance, that the people power of parents and students has overturned a perceived injustice and put the educators back in their box — they answer to the (paying) parents, not vice versa.

But we also feel like Michael Davies has been hounded from his office. Is he the victim though, or a troublemaker who was more concerned with ATAR scores than the proper social integration of his students? Some parents send their kids to private schools wanting a benign learning environment and ATAR scores are ultimately irrelevant if your child is either brilliant or dumb. The school with the highest ATAR score in all creation will make little difference to the child’s outcome in either case.

There’s a counterargument though: maybe Davies was right to want better ATAR scores for Trinity; it helps the brand, sells places at the school and makes money. Education is a business in the 21st century. The haircut was a side issue…

Arky writes: Hmm. I was hoping for a “how the sausage is made” story on how a story about internal politics at one school received high-profile coverage (e.g. if someone at the school was owed a favour by someone at The Age and used it to push their agenda, or someone at The Age was a Trinity old boy, or whatever) but no. Just a story pointing out that hey, this small local story somehow got an unnatural level of coverage.

If the reason for the coverage was that it genuinely did well in page views/ratings, then some further analysis would be nice (perhaps this is aspirational voters all over again, interested in reading about the goings-on at the type of school they wished they went to/wished they could send their kids to?). Even then though, it would beg the question of all the column space given to it and prominent website space given to it before anyone knew what the page views would be like.

Time for some more! 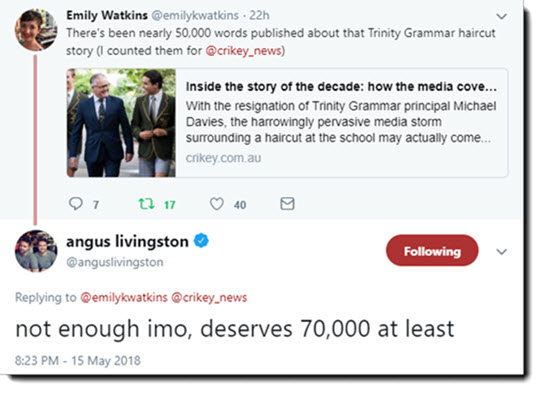 Richard Slade writes: If Murdoch thinks that destroying the ABC will force me to use his biased excuse for a news service, he’s wrong — there are other sources out there that offer more accuracy and balance that will ever be found in his pages and sites.

Lee-Ann Groblicka writes: There’s an old saying, “you pay peanuts, you get monkeys”. FFS this is our national broadcaster! What kind of professionals do you want presenting, managing and producing? Let’s find out how many taxpayer funded quasi-government positions are held by political party staffers!

Pedantic writes: Of course the Murdoch press wouldn’t mention in their articles the $30 million handed over to Fox Sports for women’s sport, for which there has been no noticeable change in programming. But having a crack at the ABC is an article of faith for these rogues and hypocrites.

Bill Hilliger writes: I’m an Aussie patriot, I never support anything that Rupert Murdoch or his NewsCrap organisation produces. Nowadays the ABC is infested with former NewsCrap muppets and is almost unwatchable. Online streaming is now the best source of news and current affairs.

Leon Knight writes: The LNP have gone out of their way to damage the ABC in favour of Murdoch because there is obvious electoral advantage for them. Labor must return the favour when they have the opportunity. If you damage Murdoch and boost the ABC, the electoral advantage will flow the correct way with no need to bully ABC journalistic standards. Just the truth and genuinely balanced forensics a la O’Brien is all that is needed. Oh, and piss off all the IPA shills and replace them with Oquist-type think tank reps.

Send your comments, corrections, clarifications and cock-ups to [email protected]. We reserve the right to edit comments for length. Please include your full name.

4 thoughts on “Another 20,000 words on the Trinity Grammar haircut?”