I don’t think my family is safe in Australia anymore

Yesterday’s news, that the federal police will be given the power to demand identification documents from anyone in an airport, has attracted a huge response from Crikey readers overnight. While a few have come out in support of the measure, the overwhelming response has been condemnation. Many readers are calling on the Opposition to “live up to its name” and stand up for civil liberties.

On the government’s new plan for airport security

Heather D’Cruz writes: I am alarmed but not entirely surprised by these proposals for police to demand identification from people at Australian airports. For some time, since Tony Abbott’s and Peter Dutton’s disparaging rhetoric about refugees and migrants of colour, I have feared that even those who have been citizens for 50 years as I have — since we arrived as immigrants from India in 1967 — might one day have our citizenship rescinded for no reason other than us being people of colour.

Now there’s every likelihood that people of colour at airports will be the first to be targeted and challenged. We have already seen many examples of profiling by police in the wider community and also at airports. Today, I have warned my siblings to always carry our Australian passports from now on, as I don’t think we are safe in Australia anymore.

Peter Macdonald writes: I applaud this measure and would like to see ID cards made compulsory for all Australians.

Dennis Wheelahan QC writes: Malcolm says there is no law requiring anyone to carry an ID. That’s true, but how do you produce one if you don’t have one? This is a but an extension of the sophist mantra “if you have done nothing wrong, you have nothing to fear”.

Marilyn Peters writes: Democracy? Dictatorship? If Australia continues down this path the difference between these two forms of government will become less and less. Gosh I wish we could have IQ tests for politicians and pass or fail them before they start making rules.

Lisa Paulsen writes: I am extremely supportive of the new security measures to be implemented at Australian airports and frankly can’t understand why anyone would object to the authorities increasing their efforts to protect us. I (and many family members and friends) often frequent the airports of the world and why on earth should I be bothered if I occasionally get stopped and asked to show ID?

As it is, I frequently get stopped at baggage security for the explosives test… and just so you know I am a senior, caucasian female. I am grateful that I live in a country which at least attempts to take my safety seriously.

I am old enough to remember when travel was leisurely and relaxed and unencumbered by all these measures, however I would prefer to live with occasional inconvenience rather than the fear of feeling that our authorities have not done their best to protect me and my loved ones.

J Gleeson writes: The issue of security is being used to erode civil rights and liberties and denigrate personal freedom — with Murdoch and co cheering on the government. Yes, this is the way to wind up with a Trump for leader.

Gary Bickley writes: I think this blows to pieces the holier than thou claims that “We will not let terror win. It will not change our way of life”… Turnbull and Dutton have a very poor record on defending people’s freedoms. Witness Manus and Nauru. Why would they stop there?

Police should never have the right simply to stop people to demand proof of identity unless they have some cause to do so. Where is the fundamental presumption of innocence? What does it achieve anyway knowing the person’s identity? And what if we are not carrying any identity?

Such a power is inexcusable, unacceptable, and draconian in a free country and opens up all kinds of possible abuses, like racial profiling and misuse of police powers. There is no evidence that such powers are needed… Turnbull is simply using wildly exaggerated fear and supposed “threats” to tighten his power. The Greens and Labor MUST oppose these unnecessary and draconian measures which steal our fundamental rights and hand power to people that is beyond legal scrutiny and checks.

Julie Monton writes: Political overreach, and an even bolder move by Peter Dutton to impose his out-of-date and now discredited older style policing philosophies on the entire nation as he strides ever more confidently towards his goal of national leadership.

This rapidly increasing authoritarianism demanded by Dutton is only possible by virtue of Turnbull’s unique mixture of spinelessness on the one hand, and determination to retain the prime ministership at any cost to the country (and in the long run even to the Liberal Party) on the other.

Les Heimann writes:Allowing federal public servants to make unqualified and unspecified demands on a person’s privacy is an unprovoked assault. This is bullying by force and must never ever be allowed in this country.

It is bad enough that we see the US behave in this brutish and utterly invasive manner — and the results are just plain inhuman. Somewhere along the line Labor and the Greens absolutely must draw the line on this assault on our persons. This sort of behaviour — smashing to the very core of our individual freedom — must be resistedat all cost. Now is the time for the Opposition to live up to their name.

Lay down the challenge to the ugly conservatives who now want to own us utterly by refusing to pass the Supply Bills if this behaviour is sanctioned. Force the brutish bullies to an election on this most basic assault on Australians. Why isn’t this making front page headlines? This is a chilling reminder to me of the stories told me by my parents who fled Germany in 1938.

Peter Gledhill writes:How long before “show us your papers!” becomes the norm on the streets of Australia?

Expecting the supine Turnbull government to say “boo” to any policy that the US supports is naive. We have become the craven international coward who only acts when they can bully a lesser entity. The single Turnbull vertebrae is kept in a locked box in the cellar from where it may emerge for a few minutes before dusting and return.

The failure to make any statement of substance regarding Gaza can only weaken our international position. So sad to see a country with such potential slide unerringly into mediocrity, and worse.

Chris Ray writes: Namatullah Kadrie could have added Australia’s journalists’ union to the list of media organisations that resort to passive voice in order to mask Israeli responsibility for atrocities.

In a statement on April 10, the Media, Entertainment & Arts Alliance managed to condemn the killing of TV reporter Yasser Murtaja without even referring to Israel. The MEAA said Murtaja was “shot in the abdomen by suspected sniper fire” and “died from his wounds after having been shot while covering the demonstration”.

In contrast, the International Federation of Journalists directly blamed Israeli troops and accused the Israeli government of “fabricating lies to justify murder”.You have to wonder who the MEAA is afraid of offending. 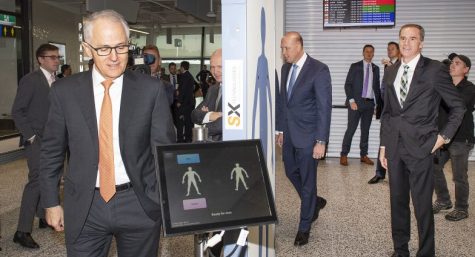 Crikey Worm: Citizenship to get harder

Re airport security,
I’m happy for a photo ID check at the gate on departure, like the rest of the world. Using a kiosk, there’s nothing to stop a determined and dangerous passenger boarding under someone else’s name.
Brian Fletcher

Hey, the Tubergruppenfuhrer wanted to try at Flinders St last year – how long before they try again?

The answer to Malcolm Turnbull’s efforts at stopping the boats is to worry about his solution. Throwing the Australian people behind an invisible wall.