Journalists are condemning headlines from both The New York Times and CNN which leave Israel out of the news entirely.

Like most major news outlets, The New York Times’ current report on today’s news from Gaza reads: “Israel Kills Dozens at Gaza Border as US Embassy Opens in Jerusalem”. However, things weren’t quite so clear in their initial headline and their tweet description posted on Monday night.

In sharp contrast to the piece’s current headline, The New York Times tweeted: “Dozens of Palestinians have died in protests as the US prepares to open its Jerusalem Embassy”. The fact that the description neither ascribed the act to Israel nor employed the word “kill” sparked outrage on Twitter. Israeli forces killed at least 52 Palestinians and wounded 2400 others in the protest. 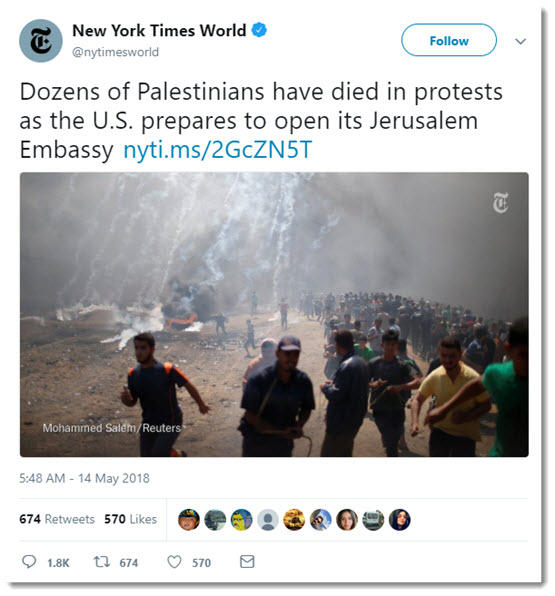 The tweet’s use of passive description, which conspicuously downplays the killings and omits facts, gave rise to hashtag “#HaveDied“. The Intercept’s Glenn Greenwald was among many journalists to censure the Times over their inaccurate reporting.

“Most Western media outlets have become quite skilled — through years of practice — at writing headlines and describing Israeli massacres using the passive tense so as to hide the culprit. But the all-time champion has long been, and remains, The New York Times,” he wrote.

Guardian contributor Jack Seale responded to the Times report with a widely shared comment: “How did they die, can you try to find out?” And former Australian senator Scott Ludlam expressed similar disapproval over the tweet: 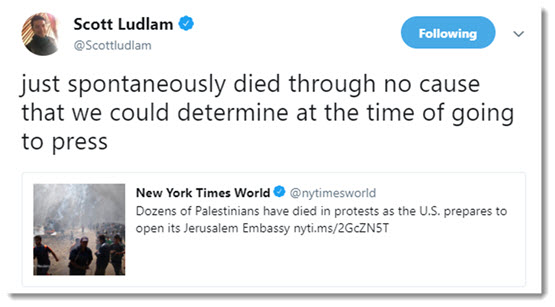 CNN is now facing rising scrutiny of their own headline — “Dozens die in Gaza as US Embassy opens in Jerusalem” — which similarly employs passive language and omits facts as to who conducted the killing.

All hail Snowden, the hero who exposed a government

When looking at misleading or deflecting headlines, always remember to follow the money. It trumps reason, justice, equality, fairness and truth.

Heart attacks all round is my best guess?

Just imagine the difference in reporting if by chance there had been a champion Australian cricketer or footballer amongst the casualties.

It is a disgrace. Ludlam was right to question.

Where in the hell does the media get off leaving out crucial details of the slaughter of people? I have no horse in the Israel/Palestinian conflict. I can never understand why Israel gets no scrutiny.

Limited Through Mixed
Reply to  Srkiv

Because the Jewish lobby ensures that Israel is kept nice and clean regardless of the odious atrocities they commit. They are a bigoted, racist, odious collective.

RJ
Reply to  Limited Through Mixed

Since when were Jews only responsible for what happens in the Middle East?

Like unarmed black men with their backs to the police in the US, unarmed Palestinian men, women and children and clearly marked Press people are seen as existentially dangerous by the brave warriors of the Israeli “Defence” Force. And as we all know, “Israel has a right to defend itself,” even against the deliberately malnourished population of the world’s largest open air concentration camp.