The ABC has continued its public relations campaign against the Government's cuts in Tuesday's Federal Budget with news director Gaven Morris's address to the Melbourne Press Club yesterday. "Make no mistake, there is no more fat to cut in ABC News. From this point on, we're cutting into muscle," he said.

“No more fat to cut”. The ABC has continued its public relations campaign against the Government’s cuts in Tuesday’s Federal Budget with news director Gaven Morris’s address to the Melbourne Press Club yesterday. He reiterated some of the ABC’s most “impactful” (his word) journalism and said the latest cuts — on top of the $254 million in cuts since 2014 — couldn’t been made with “efficiencies”: “Make no mistake, there is no more fat to cut in ABC News. From this point on, we’re cutting into muscle,” he said.

News Corp’s radical change. News Corp is about to undergo its most radical change since the great Murdoch empire split of June 2013. Thanks to the just-concluded Foxtel/Fox Sports merger, News expects that from the current fourth quarter (ending June 30), more than half of its revenues and profits will come from its digital real estate services and pay-TV businesses as the company places more focus on recurring subscription-based revenues. The forecast, made to an analysts’ briefing, came after the company reported better-than-forecast revenue in its fiscal third quarter thanks to its digital real estate business. But the company’s net loss for the period jumped to US$1.2 billion thanks to the already-announced write-down of the News Corp’s investment in Foxtel ahead of its merger with Fox Sports. That write-down was just under US$1 billion, with another $165 million in write-downs at its News America business. Excluding the impairments, operating profit (earnings before interest, tax, depreciation and amortisation)  fell 15% to $182 million. The net loss means News will report a loss for the year to June 30. — Glenn Dyer 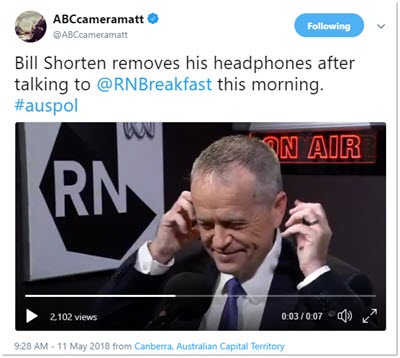 Chinese channel banned from Eurovision. The European Broadcasting Union has banned a Chinese network from airing Eurovision after it censored LGBT elements of the first semi-final. The BBC reports that Mango TV blurred a rainbow flag and tattoos in the crowd, and didn’t air the Irish or Albanian entries. Irish singer Ryan O’Shaughnessy’s song is about the end of a relationship, and is staged with two male dancers in his performance. The second semi-final was broadcast this morning on SBS in Australia, and the grand final is on Sunday.

Department of corrections. Eagle-eyed Crikey tipsters have been spotting problems with TV graphics over the last few days. On news channel Sky, AFL player Nic Nat’s name proved to be some trouble for the graphics producer. 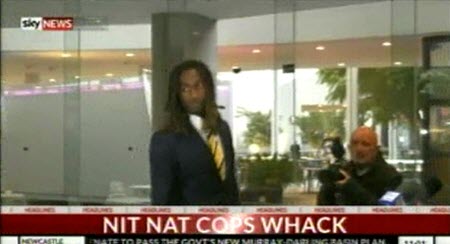 And at the ABC in Perth, whoever was doing the graphics for this 7pm bulletin story didn’t look too closely at those bills — they’re for southwest England, not anywhere in Australia. 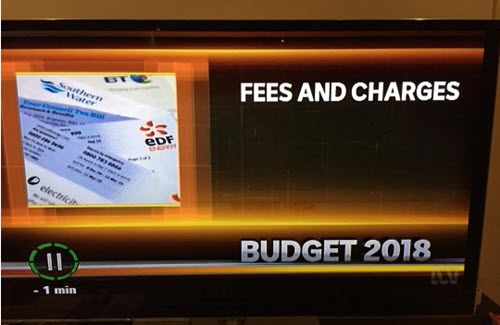 Glenn Dyer’s TV Ratings. A night to forget — except for Ten with Masterchef (1.12 million nationally) again doing well and easily topping Seven’s House Rules  — 936,000 nationally. Naturally Seven and Ten both said they won something from the night. Nine was on top in the main channels, while Seven did better in total people thanks to a strong performance from its digital channels which finished one and two in those rankings. In the Melbourne AFL show battle, Nine’s Footy Show managed 185,000 viewers, Seven’s Front Bar, 183,000.

Elsewhere, Ten today announced it had renewed Hughsie: We Have A Problem and Show Me The Movie for second seasons. — Read the rest on the Crikey website

Where is the National Party when the ABC is cut? Surely they have an interest in regional coverage and farm issues!

Not anymore! They’re now a fully fledged servile appendage of the Liberal Party.

Sadly that vid shows why he can’t even beat Talcum, a bloke who can have an argument with himself and lose.