The government is treating us with contempt by racking up hundreds of millions of dollars of extra national security spending without debate or transparency.

Less than a month after the Productivity Commission issued a warning about governments using national security to hide wasteful expenditure, the government has served up a contemptuous example of exactly that in the budget. In its recent Trade and Assistance Review, the PC warned:

There is little transparency of government spending in pursuit of national security objectives (such as airport security), nor the compliance costs that regulation imposes on Australian businesses and consumers. While security measures often necessitate secrecy, this should not preclude careful assessment of governments’ spending and regulatory measures aimed at averting terrorism or ameliorating its effects.

In the case of a handout to domestic spy agency ASIS — that’s the foreign affairs-based spy agency that illegally bugged the East Timorese cabinet, for which no one has ever been prosecuted — try no transparency at all. The budget papers announced that ASIS was receiving “additional funding over two years from 2018-19 to enhance the capacity of the Australian Secret Intelligence Service to meet the government’s national security objectives.” But what that funding was is a secret, for national security reasons.

We can get a vague idea from DFAT’s Portfolio Budget Statement: ASIS’s direct appropriation this year, before carry-over from previous years, is around $283 million; that will increase to $303 million next year and $314 million in the year after, then fall back to $288 million, so it’s perhaps been given $50-odd million over two years.

The fact that you can get a broad idea of the amount — and you can be sure other countries’ intelligence services keep a forensic track on all publicly available financial information about our intelligence agencies — makes a mockery of the government’s childish insistence that it can’t tell us. And since ASIS doesn’t report on its expenditure or even the kind of normal outcome-output budgeting framework that other agencies have, there’s not even a pretence of public accountability for its existing funding.

ASIO got some extra funding as well: $24 million in the coming year, “to support current operations and undertake preliminary work to enhance future operations”. Which is the bureaucratese equivalent of “to do stuff”. We’re also spending $60 million on a National Criminal Intelligence System to address crime and national security.

On top of that we’re spending an extra $190 million in 2018-19 on Operation Okra, which is the ADF’s involvement in fighting Islamic State and training the Iraq military (which you’d think the Iranians should be paying for, but anyway). Okra was supposed to be winding down, with just $50 million to be spent next year, but that’s gone up to $240 million.

Indeed, it’s done that for the last few years, despite the apparent defeat of IS. Since 2015 we’ve spent almost exactly $1 billion on Okra, and Defence thinks (at the moment) it will eventually cost $1.6 billion. Likewise, Operation Accordion — which is another Middle East operation “to support the sustainment of Australian Defence Force operations, enable contingency planning and enhance regional relationships in the Middle East Region” — continues to suck in money year after year.  This year it was supposed to cost just $24.5 million, but that’s blown out to $208 million.

So far, Accordion has cost us $660 million since 2014. Defence thinks it will eventually costs $970 million, assuming it doesn’t blow out again next year. Then again, given we loyally follow the United States into every Middle East invasion going, the contingency planning probably makes sense.

Still, at least we know the cost of this Middle Eastern adventurism. The cost of our involvement in the fight against IS in the Philippines — a conflict that is much more directly important to our national interests — is, like ASIS’ funding, being kept from us. Operation Augury, as it’s known, “is not for publication (nfp) due to national security reasons”. Likely it is of a lower order of magnitude than Okra or Accordion, but its being kept secret is inexplicable.

All up, that’s at least an additional half a billion dollars in the budget for national security above the existing billions we already spend, with no debate, little transparency and no apparent examination of its costs and benefits.

Beyond the Productivity Commission, which first tackled the issue this year, and commentators like Saul Eslake, there’s no pushback against the nonsensical secrecy that comes in the wake of invocations of national security. The media accepts it without demur; Labor exercises the same commitment to silence when in government, and whoever is in government uses parliamentary processes to shut down any scrutiny from the likes of the Greens. But the PC is right — you can be sure there is little in the way of “careful assessment” of these hundreds of millions of dollars of additional national security spending. 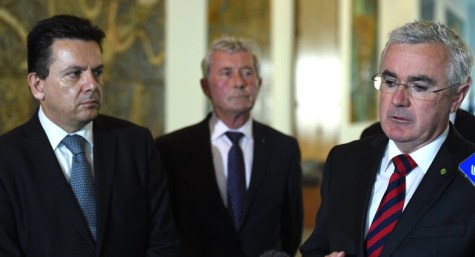 A short and disturbing history of Australia’s spy scandals 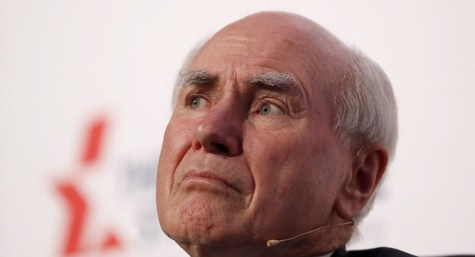 We can imagine the very cosy deals going on behind the scenes. Job for mates? Just say it’s national security, no one will question it. Let’s hope someone picks it up for Senate Estimates. Thank God for Crikey.

Because Dutton demands it?

Because the world generally and climate wise, is heading downhill rapidly
Meaning that us peasants might start getting uppity,and all that “security” stuff will be neared to keep us under the thumb.

Whoops, should be “needed”.

It always amuses me how right wing reactionaries bleat about ‘freedom of expression’, ‘democracy’ and so on yet under this government we have seen far more attacks on such than any other.

Amused is not the word I would use.
Bemused is more like it but then again, that is probably a response the bastards are looking for.

Using ‘security’ as a smokescreen has been a time honoured tradition of governments and public servants for decades. Only the naive would accept the line that ‘we can’t tell you what we’ll waste the money on because you haven’t got the required security clearance’. Some of the rorts in the government departments that are hidden by ‘security’ concerns, and of later years ‘commercial concerns’ defy belief. Until the Australian taxpayer demands accountability from governments of ALL persuasions they will get away with it.

This mob’ll be cutting Crikey’s funding next…..