Scott Morrison and the Liberal party’s addiction to spending taxpayer money is safe for the moment, but we’ll all rue his inability to control himself if a downturn requires some fiscal firepower in years to come.

Last night’s budget shows that, after two years of settling into the role of Treasurer with responsibility and circumspection, Morrison was in fact more like Joe Hockey and Tony Abbott than his Finance counterpart, Mathias Cormann.

Morrison inherited from Hockey and Abbott spending at 26.2% of GDP — a level higher than that of the Rudd government during the financial crisis. It was his proud boast that he (in fact much of the credit belongs to Cormann) that he got that “spending problem” under control. And indeed he did. In 2016-17, spending fell to 25% of GDP. It was still far higher than the level of spending under Labor — 23.9% of GDP in 2012-13 (revised down in last night’s budget papers) — but still a worthy achievement, and a repudiation of the whining sook Abbott’s claims that the Turnbull government was spending too much.

As it turns out, though, we should have recognised last year as a warning sign that Morrison was done with curtailing spending. Spending went up in 2017-18: last night’s budget papers show it rose to 25.1% of GDP. And that wasn’t merely a result of lower than expected economic growth. In December, the government told us in MYEFO that spending was set to be $457.6 billion. Last night, that figure was revised upwards to $459.9 billion.

Next year things get significantly worse. Spending is surging over 3% in real terms — the biggest growth since the new Abbott government piled as much spending as it could into 2013-14 in an effort to blame Labor for fiscal indiscipline. Spending will rise to 25.4% of GDP; nearly $5 billion in new spending has been added since December’s MYEFO alone. In retrospect, the Abbott and Turnbull governments may turn out to be the era when Commonwealth spending settled permanently at around a quarter of GDP. 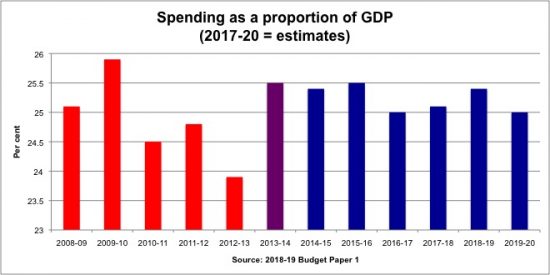 At the moment Morrison has plenty of revenue to throw around: since this time last year, Treasury has found $10 billion in extra tax revenue for 2018-19 and a handy $1.5 billion in non-tax revenue — the exact reverse of the problem that bedevilled Swan and Hockey, when they’d have to dutifully front twice a year to explain how Treasury had overestimated revenue.

But net debt is still going to peak this year at $350 billion. If an international crisis sends economies into a tailspin — want to bet that won’t happen under Trump? — we’ll likely have dramatically fewer fiscal resources with which to respond, and virtually no monetary policy resources given record low interest rates. For Morrison’s sake, and for the sake of every worker and business in the country, let’s hope we don’t have to find out.