ABC staff have responded to new $84 million cuts to the broadcaster's funding, which union officials are calling a highly politicised attack against an already besieged vital service.

The government’s cuts to ABC funding in yesterday’s federal budget have left managing director Michelle Guthrie “disappointed and concerned”, she said in an email to staff last night. “This decision will make it very difficult for the ABC to meet its charter requirements and audience expectations,” she said.

Guthrie said in a public statement that the cuts could not be absorbed by efficiencies. “Stable, adequate funding is essential if we are to continue to deliver for Australian audiences,” she said. The ABC would continue to negotiate its funding requirements for the next three-year funding period, the statement said.

In an email to the news division this morning, news director Gaven Morris opened by noting Monday night’s excellent Four Corners about rape and consent, which prompted the NSW Attorney-General to refer the state’s sexual consent laws to the Law Reform Commission yesterday. “This is what we mean by distinctive, impactful journalism,” he said. “We want to do more of this journalism in the public’s interest.”

Morris and Guthrie, in their public and internal messages, have emphasised talking points from this year’s first annual public meeting — in particular, that the ABC is trusted by the vast majority of Australians.

The government has cut $83.7 million over the next three-year funding period starting in 2019, while also ceasing ABC News’ additional funding of $43 million, which Morris said in his email had funded regional, suburban, investigative, and specialist reporting teams, as well as the RMIT Fact Check unit. Morris said any cuts would be assessed across the entire ABC, and not specifically tied to those initiatives.

Treasurer Scott Morrison doesn’t seem too concerned — he told BuzzFeed‘s new politics show (broadcast on Twitter) this morning that he doesn’t think the ABC will need to make cuts to programs, but so long as it doesn’t affect Shaun Micallef’s show Mad As Hell he’ll be happy.

“Since 2014 the ABC has retrenched close to 800 staff and undertaken endless restructuring to find these savings,” she said. “It is obviously hurting ABC staff and their families but ultimately all Australians are the casualty of these cuts, especially in regional and rural Australia — where cuts to analogue services and emergency broadcasting have already hurt communities.”

Ealy said it marked a “critical moment” for the ABC. “It has long been our view that the ABC cannot survive another term of the Turnbull Government and last night’s budget announcement proves it. These are ideological and vindictive cuts that won’t make any meaningful difference to the budget deficit.”

On Twitter, the Media, Entertainment and Arts Alliance (MEAA), the union representing journalists, said the cut was political, and cuts to the ABC’s budget added up to $350 million since 2014. “The ABC’s enemies will be very happy tonight,” it said. 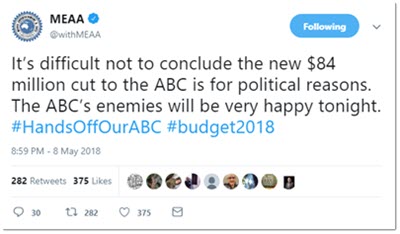 “These funding cuts have placed enormous stress upon the ABC which, last night, was once again being asked to do more with less,” McInerney said. ““The timing of these cuts could not be worse: in the lead-up to a federal election when strong journalism to independently scrutinise politicians’ claims and counter claims will be needed. It is becoming increasingly difficult for the ABC to deliver original investigative journalism and local and regional news-gathering with these deep cuts to its funding.”

57 thoughts on “‘Ideological and vindictive’: reactions to ABC budgets cuts”