Australian newspapers have come through again for the 2018 budget, the most wonderful time of the year for front pages. And other media tidbits of the day.

Budget front pages. The federal government’s annual gift to cartoonists and artists, the federal budget, featured on all the major daily newspapers today. 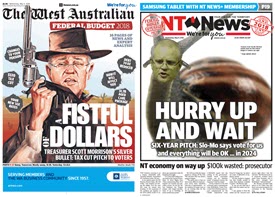 Vale Russell McPhedran. Longtime Fairfax photographer Russell McPhedran, who died at 82 on Monday, has been remembered in the pages of The Sydney Morning Herald today for his portfolio of some of history’s most important moments, including the Munich Olympics. Fairfax has also published a gallery of some of McPhedran’s images.

Phnom Penh Post exodus continues. The fallout out from the weekend’s sale of Cambodia’s last independent, English-language newspaper has continued, with another seven resignations. Journalist Erin Handley tweeted yesterday that there had been another seven resignations at the Phnom Penh Post, including her own, since the editor-in-chief and other senior staff were either fired or resigned earlier in the week. She said that took the total to 14 people who’d left. The paper was sold to Malaysian businessman Sivakumar S Ganapathy, whose PR firm has done work for the Cambodian government, as pressure on the press in the country have dramatically increased over the past year.

Another UK media inquiry. Out of the blue, the UK is on the brink of yet another inquiry into the performance of the country’s media. Prime Minister Theresa May is facing growing pressure from parts of her party for the new investigation — media reports suggest that several Conservative MPs have threatened to defeat the government on key data legislation.

On top of this the UK House of Commons votes tonight, our time, on a Labour proposal that will impose significant costs on media organisations sued on data protection grounds, unless they have accepted state-backed regulation. Deputy Labour leader Tom Watson has put up an amendment which would introduce costs sanctions requiring publishers to pay the claimants’ costs of legal action brought against them in data protection cases, win or lose, unless they are signed up to a state-backed regulator.

The first major probe was by Leveson Inquiry from 2011 through to 2013 and was commissioned after the News of the World hacking scandal. UK Culture Minister, Matt Hancock ruled out a second public inquiry in March. But a cross-party amendment to the data protection bill would establish a sweeping public inquiry “into allegations of data protection breaches committed by, or on behalf of, national news publishers and other media organisations,” including broadcasters.

Facebook and Google would be in the firing line here, but the inquiry would also, as did the Leveson inquiry, look at the relationships between police and the press, as well as the role of politicians and public officials. — Glenn Dyer

Leveson latest: an actor, a comedian and a supermodel PA walk into an inquiry …

I am surprised the figures are so high. I rarely watch commercial tv but last night I did – a re-run of New Tricks on 52. Better acting than any ScoMo performance.