The sale of Cambodia's last independent newspaper over the weekend has prompted an open revolt by staff, with senior staff including the editor-in-chief either quitting or being fired.

Kay Kimsong, left, editor-in-chief of the Phnom Penh Post, speaks to reporters after being fired by the newspaper’s new owner for a report it published Monday.

The sale of Cambodia’s last independent newspaper over the weekend has prompted an open revolt by staff, with senior staff including the editor-in-chief either quitting or being fired.

The Phnom Penh Post was sold by Australian Bill Cough to Malaysian businessman Sivakumar S Ganapathy, whose PR firm has done work for the Cambodian government. Since the sale was made public on Saturday, Ganapathy has sacked editor-in-chief Kay Kim Song, business editor Brendan O’Bryne, and national reporter Ananth Baliga, in response to a report published about the sale. Managing editor Stuart White and CEO Marcus Holmes have also reportedly resigned.

The story was also published on yesterday’s front page, with O’Byrne and Baliga’s bylines: 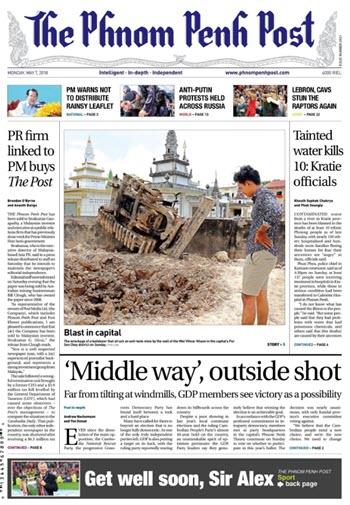 In its story about the sale, the Post described the new owner’s PR company’s ties to the Cambodian and Malaysian governments — connections he said were untrue. Ganapathy responded to the Post‘s report of the sale with an extraordinary statement saying the work “smells of malice”, and said the story was a “violation of the journalistic code of ethics”.

There have been growing concerns about press freedom in Cambodia. Last year, another independent newspaper The Cambodian Daily was shut down in September after it was given a month to pay $6.3 million in a dubious tax bill. The Post had $3.9 million in tax it owed — a debt the new owner has taken on.

Radio Free Asia (funded by the US government) closed its bureau in Phnom Penh in September after it was also caught up in a tax dispute, after the government shut down more than 30 frequencies it aired its shows on. Two of RFA’s former reporters Oun Chhin and Yeang Sothearin have been in prison since November, when they were arrested on charges of espionage — “providing a foreign state with information which undermines national defence” for allegedly setting up a studio for RFA, something they’ve denied. They were denied bail again last month.

Ahead of last week’s World Press Freedom Day, Reporters Without Borders (RSF)’s new press freedom index placed Cambodia at 142 on its ranking of countries’ press freedom — down 10 places from 2017.

RSF reports that Prime Minister Hun Sen’s regime “launched an  all-out war on independent media outlets” ahead of the July 2018 general elections. As well as the newspaper closures, “Several journalists are now in prison on trumped-up charges. Combined with the shooting death of a media commentator, this has resulted in a climate of terror that has drastically curtailed press freedom.”