Budget bullshit watch: is it really time to say cheers to cheap beer?

The government has found itself a very convenient narrative ahead of tomorrow's budget, and the media seem all too happy to jump on board.

Here’s to ScoMo, he’s true blue! The government has found a hell of a headline ahead of the 2018 budget tomorrow with the announcement they’ll be cutting an “outdated and ridiculous” tax on craft breweries. The news, which dropped on Friday, is certainly exciting if you own a craft brewery, but is it really going to deliver the “CHEAP BEER” the headlines have been promising?

The planned change — which has been a long time coming, and was long campaigned for by Labor’s Anthony Albanese — will remove the extra tax required on kegs which are smaller than 48 litres. Under the new rules, all kegs over 8 litres will be taxed at the same rate, which will help level the playing field between the big breweries and smaller, craft producers. In a statement, the treasurer said this would help “drive competition in a sector currently dominated by large domestic and multinational brewers” and “will likely put downward pressure on prices”.

It’s no surprise that the last point was enthusiastically embraced by the media. Triple M picked up the news with the decisive headline “Craft beers set to get cheaper as bizarre tax axed” and celebrated it as a huge win live on air.

“Axing beer tax will make trendy craft brews cheaper,” The Daily Tele concurred. “The budget move will mean some of Sydney favourite frothies — like Hair Man and Young Henry’s — will soon be cheaper,” Sharri Markson wrote. “Other brands that could see a price drop include Snowy Mountains and Batch.”

Don’t feel too bad if you didn’t pick up the important difference between “will soon be cheaper” and “could see a price drop”; the front page stated things in no uncertain terms: 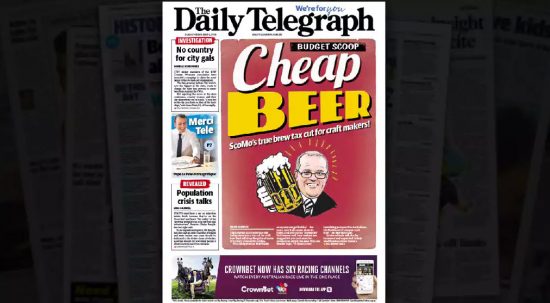 Things were more confusing over at 9News, however. A news story with the headline “Cheers! Why buying beer just got cheaper” was finished off with this jarring point:

But will it lead to cheaper beer? One craft beer maker, with the Treasurer, at the official announcement, said it was up to individual producers. But, he said he didn’t think he’d pass the cut onto drinkers and lower the price.

The Border Mail had the right idea and put the question straight to some independent brewers who were celebrating the news: will the saving really be passed off to pub patrons? Rupert Shaw of Bright Brewery said “[the move] may lead to some cuts in price, but independent brewers have higher costs anyway”, and Grant Jones from Malt Shed agreed. “We think the treasurer’s statement on cheaper beer isn’t always right,” he said.

Shaw and Jones aren’t alone. Other brewers have stated the savings will likely allow them to “invest money in things that will improve the output and quality of what we do”.

Even with the tax cut, craft producers face other disadvantages in the market. There have long been complaints of being “locked out” of venues that have restrictive contracts with major brewers in exchange for “rebates, infrastructure investment and refurbishment loans”. The ACCC investigated the matter last year, and continues to watch its effect on the market.

Reducing price is one way of making your product more appealing in a market dominated by the budget brands of Lion Nathan and CUB, but don’t be surprised if producers use the savings on marketing, development or distribution instead. That may not be as appealing for the government and mainstream media who want to appeal to beer-guzzling voters/readers who want to save cash, but it seems to be closer to the truth.

Try an ale that will keep you awake

Not that it is entirely to do with the govt’s actual policy as I understand it, but there was an interesting nepotism on The Checkout last night talking about how the Woolworths and other big players are buying up the ‘craft’ beer companies. Less tax for them?

Nepotism is iPad at work, spot is what I actually wrote.

And isn’t Limited News doing the running on this – selling their Budget – like they did for their Howard-Costello Limited News Party government when they sacrificed the mining boom revenue (for votes before future) and what that did subsequently to services like education, health/dental, aged care, industry regulation and everything else our taxes are supposed to fund?

Interesting that the craft brewers seem not to have learned the lesson of the BCA’s brilliant pro $80B tax gift (not a rebate as that would imply that they payed enough, or any) – “One craft beer maker,… said he didn’t think he’d pass the cut onto drinkers and lower the price.“.