The Sydney Morning Herald has obtained the letter of apology ABC managing director Michelle Guthrie sent to former PM Kevin Rudd. And other media tidbits of the day.

What ABC’s Rudd apology reveals. The Sydney Morning Herald splashed today with London-based journalist Latika Bourke having “obtained” the letter ABC managing director Michelle Guthrie sent to former PM Kevin Rudd apologising for a sloppy mistake about him in its so-called Cabinet Files series. The fact that the ABC had apologised was not new, but, curiously, Burke skimmed over the most striking revelation in the previously unreported letter — that Rudd’s legal advisors had already provided specific evidence the story was wrong before it was published. Guthrie wrote:

“I also accept that prior to the publication of the ABC’s story your legal advisor informed the ABC of several concerns and provided specific references to findings from the Commissioner’s Report, and I acknowledge the frustration this has caused.”

The ABC has been widely criticised over the whole Cabinet Files saga — from the mistake made in the Rudd story, to the fact that it wasn’t handled by one of the investigative journalism teams, to the logistics of how the ABC handled the documents themselves.

Exclusive watch. We all know The Australian loves an “exclusive”. But it seemed a bit rich even by their standards to give this piece — about One Nation Senator Brian Burston apparently editing his party from his online presence — the exclusive treatment. 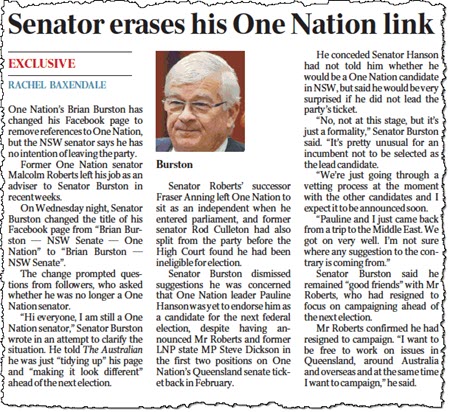 Ten’s first appearance in CBS results. Ten Network made its first contribution to the results of its US parent, CBS, which produced its March quarter earnings report overnight Thursday. The company’s report recorded revenues which is where Ten made a small difference, although no actual figures were given. Revenues for the first quarter of 2018 increased 13% to $3.76 billion from $3.34 billion for the same prior-year period, with growth across all significant revenue streams. — Glenn Dyer

Press freedom panel censored. A World Press Freedom Day panel discussion planned to be held at the United Nations was cancelled when one of the sponsors, the United Nations Alliance of Civilizations (UNAOC) wanted an included video presentation edited. The event was due to be held yesterday, and was co-hosted by the News Literacy Project, which had produced a video that talked about restrictions on press freedom in a number of countries, including Turkey — a co-sponsor of the UNAOC. Writing about the cancellation, the NLP’s Alan Miller said:

I could not permit this censorship of our presentation due to the stated concern that it would offend one or more countries engaged in repression and violence against journalists. We at NLP find UNAOC’s decision particularly ironic because the event was to celebrate World Press Freedom Day. We had not discussed prior review of our presentation with UNAOC and would not have agreed to participate if it had been asked.

The NRL Footy Show in Sydney, 70,000, and Brisbane, 40,000. Seeing the Brisbane Broncos won the game narrowly over the Canterbury side from Sydney (207,000) and Brisbane (188,000) you would have thought that more people from that game would have stayed around to watch the Footy Show. It was a controversial end to the game, but even that couldn’t get viewers to stay with Nine.

Despite a caution from Rudd’s solicitors, the ABC published a previously published, & incorrect, story.

And despite Emma Alberici being (by a country mile) the most astute economics commentator on the ABC, she is scandalously not included in the promo for next week’s budget coverage.

Bear in mind that Alberici would analyse it accurately. Danger, danger!

If the Budget exclusion & snubbing of Alberici is not a perfect metaphor for the ABC’s pre-emptive cringe, then it could only be because of editorial idiocies as per the article.
How soon before the entry into common daily usage of the phrase, “get a new one, this is guthried”?