How do Australia's richest individuals and families stack up according to the Petre Benchmark?

This is the second instalment of a two-parter on philanthropy in Australia. Part one established the Petre Benchmark for philanthropic giving, and argued that the rich have a unique obligation to donate money. Read part one here.

So, how do Australia’s richest individuals and families stack up according to the Petre Benchmark?

Let’s look at the lists

This first list is the AFR Rich List which lists the 200 most wealthy people in Australia. The most wealthy is Anthony Pratt (as mentioned above) with a net worth of $12.6 billion and the poor guy who comes in 200th is Owen Kerr with a paltry $342 million. Using my benchmark, the Pratts could be donating $126 million a year (5% of the 20%) and poor Owen could be donating $3.42 million (5% of 20%).

Now if you apply the Petre Benchmark to just the top 10, you find that each of the families note would be donating the following annually: Pratt $126 million, Triguboff $114 million, Rinehart $104 million, Lowy $83 million, Glasenberg $69 million, Forrest $65 million, Gandel $61 million, Wing Mau $60 million, Packer $48 million and Perron $39 million. None of them are donating anywhere near these levels.

Keep these numbers in mind as we move on.

The second list is the AFR list of the 50 most philanthropic people. However there is a caveat. In this list, the top two positions  — Ramsey Foundation (donations last year of $83 million) and the  Ian Potter Foundation (donations last year of $35 million) are both dead guys. In fact there are others in the list of donors (top 50) that are also donations from the foundations of dead guys. And when you are looking at comparing the living wealthy and philanthropy you probably should exclude the foundations of dead guys.

Nonetheless, let’s do some maths and assume everyone in the giving list is living (even if they are not!). The top donor is (as mentioned) the Ramsey Foundation ($83 million) and coming in at number 50 is The John Reid Charitable Trust with $3.3 million. Total giving last year from the 50 was $459 million. Good? Yes. Impressive? Maybe not.

So the aggregation of the 50 biggest donors (including a bunch of dead guys) was $459 million (exclude just the top two dead guys and this drops to $341 million) and the Petre Benchmark of possible giving (that does not change the life of the givers) would suggest $1.44 billion in gifts — around 30% of the potential. Hmm … 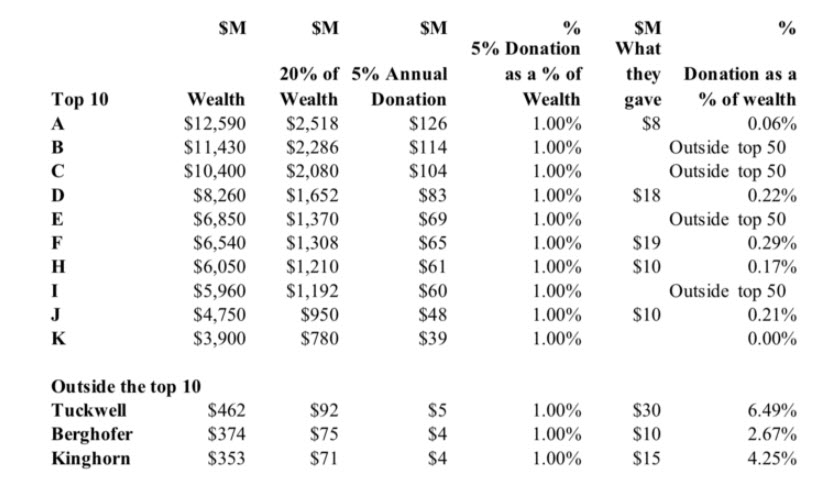 Our most wealthy and their philanthropic donations

Of course in some cases maybe the size of the family’s (in the table above) donations made them fall out of the AFR top 50 donors (which means they gave less than $3.3 million) and/or their donations were done very secretively and not using any tax structured foundations. Possible.

The table shows that none of our top 10 are close to giving away anything substantial. With annual giving in the range of 0.06% to 0.29% of their net worth I am not sure any of these donations count as philanthropy in the true sense of the word. I also feel that this data suggests our most wealthy do not appreciate how fortunate they are and the responsibility of those most fortunate to give back to the society from which their wealth came.

Let’s go back to the Forrests. In reviewing their data I want to make sure one thing is acknowledged: it is truly wonderful that they have signed up for The Giving Pledge (to give most of their wealth to charity before they die). This is a big deal if they follow through as they seem to be planning to.

Their net worth is $6.84 billion. 20% of this is $1.36 billion. Last year in a massive announcement including the Prime Minister the Forrests put $400 million into their foundation (so 5.8% of their wealth). Last year they gave $18 million from this foundation. Is this a huge gift; in absolute terms it is. Especially if it represents a massive part of your net worth which in this case it is not.

In relative terms, this donation is not so newsworthy. In the Forrests case, $18 million in donations last year represents 0.29% of their net worth.

Good, great and outstanding: rethinking the way we praise philanthropy

To be clear, the Forrests are doing good things. Moving 5.8% of their wealth into a foundation is a good start. Giving away the equivalent of one quarter of 1% of their net worth in one year is a good start (at this rate it would take around 400 years for them to give their money away). To be fair to them they are the standout family of our 10 most wealthy families (in terms of giving) but 0.29% of net worth being donated in one year is not something to make a big deal about nor is moving 5.8% of your wealth into a foundation. Good, but not great.

Great is someone allocating more than 50% of their net worth to a foundation on their death. Paul Ramsey did this (he donated nearly all his wealth on his death to his foundation). Also Ian Potter (creator of the Ian Potter Foundation) and many others have done similar things.

Outstanding is someone allocating more than 50% of their worth to a foundation while they are alive. Bill Gates has done this as have a number in The Giving Pledge list.

In our case (Petre family) we have a lot less than anyone on the AFR Rich List and yet my wife and I have allocated around 35% of our net worth to our foundation  — with more coming in the next few years.

Is this great? Nope. However better than average and better than most on the Rich List who have far more discretionary wealth than we do. Still our efforts are not great and the efforts of most of our wealthy are somewhere between sad and disgusting.

Great is an average Australian who has less to give (as they have a very tight budget) and yet they give money to charities. I suspect thousands of regular Australians give away more than 0.06% or even 0.29% of their net worth each year to charities and they do not get any fawning articles written about them not catch-ups with the Prime Minister.

We need to acknowledge the donations provided to worthwhile charities by our most wealthy but can we please keep the fawning press coverage until someone actually moves more than 50% of their wealth into a foundation which then allocates donations at the required levels (5% of the corpus which means you are donating around 2.5% of your net worth to charities each year) while they are alive.

This article was originally published at Medium 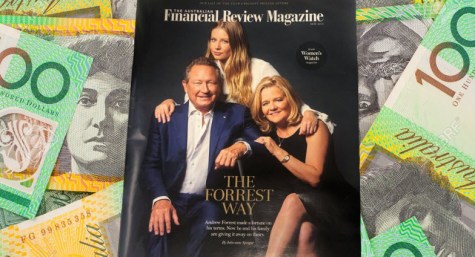 The rich have a moral duty to philanthropy. Do they really deserve praise for it?

Our rich are the most stingy

Rich bastards paying tithe?
As always, such charity as exists us due to the widow’s mite, not the mighty’s empathy.

All very earnest and quantified DP but like most people in our utilitarian age you seem to regard civic justice as largely about reasonable wealth distribution. It’s not. It – the ‘fair go’ – is far more a matter of systemic universality and an observed covenant of mutual obligation. Charity is arguably even actively sociopathic in a secular democratic society, and the more the former features in the latter the greater its civically corrosive effect, via its tendency to atomise tribal altruism. Charity is also very much about the autocratic wielding of sheer financial power, however sensitively and discreetly, and far too often it’s also about noxious ego, creepy ideology, cynical opportunism and trojan horse paternalism. And, quite possibly, it’s the least escapable (albeit benign) form of human subjugation there is.

If a Twiggy Forest or an Anthony Pratt wants to give away their spare money that’s their business, and doubtless many desperate people and great causes benefit from the philanthropic impulse…but it needs to be recognised for what it is: not altruism, ultimately, but narcissism. Doesn’t make it a bad thing – people can burn their spare dough like The K Foundation for all I care (my preference, actually) – and it’s certainly not a reason to disdain individual generosity, but please let’s not dignify it with labels like ‘civic obligation’, or a ‘duty’ of the rich. Their only such fiscal thing is exactly the same as my only such fiscal thing: to line up anonymously every year at the ATO – no special treatment, no dodging, no applause, no AO for charitable works, no fulsome thanks from the humbled beneficiaries, and no direct say over where their contribution goes – and stump up their fair share for tribal revenue. I don’t even really mind what we jointly elect to be our agreed calculus of ‘fair’, nor how often we tweak it. As long as the system is transparent, and everybody is manifestly in, and of, it. That’s all I want from the rich. And the poor. And the middle.

In part one you wrote that no one can force the financially successful to give back, DP. Well, yes we can, and yes, we do. It’s called ‘taxation’. Charity is ultimately its civic enemy; and of progressive taxation, especially. We should resist it taking any greater hold of the public fiscal domain in this country than it already has. It’s not the way to a fairer future, but the opposite.

Keep your charity. Pay your tax.

I heard that the K Foundation is reactivating.

Let’s hope so. Will certainly do my bit, as ever. One of the truly great unsung subversive moments in history. Give it another half century or so for the penny to drop. Or melt, as it were.

Thanks for this article. It’s not just philanthropy though. These people are the worst investors in research and development in the (developed) world. You are being careful with your words Daniel but the truth is we’ve go a cohort of the most successful people in this country who are actually some of the lowest quality in the world. Drug traffickers are typically more generous in their home countries than are Australian billionaires. The emerging picture about Australian banks is reflected in the commercial superannuation section and it’s because of the culture among the rich. They’ve fallen into an unsustainable culture of seeing themselves as being exceptional people who have rightly taken what is theirs from people who are less exceptional. There is decreasing understanding that they only exist because of the acceptance of the community that they rely on. And as we become increasingly less impressed by such people, things are bound to change.

That is a depressingly accurate assessment.

Yes, we glorify the success stories, the entrepreneurs in this country, with biographies and mini series, but the truth is most of them just lucked it; and maintenance of their wealth involves continuing to use every greed driven tactic possible.
Charity to them is just another tax minimisation strategy, which makes that self righteous smugness all the more nauseating.
How does this compare to other countries? I suspect it is worse here because the politically conservative and the wealthy privileged in this country mostly aspire to status in other countries, not this one. Without any genuine nationalistic pride, true benefactorialism (sorry, ? word) is highly improbable.