Psst Scott, here’s some some budget briefing notes if you need them

Could this be Scott Morrison's last chance to get the budget right? Here are some pointers on how he can achieve a strong surplus and begin rebuilding the nation’s crumbling wealth.

Can you afford to miss Crikey’s in-depth Budget Edition email? If the answer is a resounding no, then keep an eye out for our members-only budget night email. We’ll be crunching the numbers and translating the spin to give you our outsider view from inside the lock-up. If you’re not a current member, sign up and use the promo code BUDGET2018 to save $29 on an annual membership.

In the lead up to the federal budget next week, Crikey is publishing various contributions on theme of “fantasy budget”. Yesterday Per Capita made the argument for progressive tax. Today, Helen Razer takes another approach…

Well, your efforts have been extremely disappointing this year, given the tremendous global tailwinds most economies have enjoyed.

You have one budget before the next election. So here’s the plan. This is where we will be this June, based on last Friday’s Finance Department update:

There is no excuse for deficits now. The Seychelles, Slovakia, Slovenia, Sweden, Switzerland and Somalia are all in surplus, and they’re just the countries starting with S. Most well-run economies are now balancing the books. Australia can too.

At least you raised revenue this year more than you increased spending, as we advised last year. But nowhere near enough.

But where you have failed most miserably, Scott, is with revenue. Just appalling! Column A, below, shows where revenue will be this June. Column B shows where we need to be next year. Column C shows the percentage increase required. 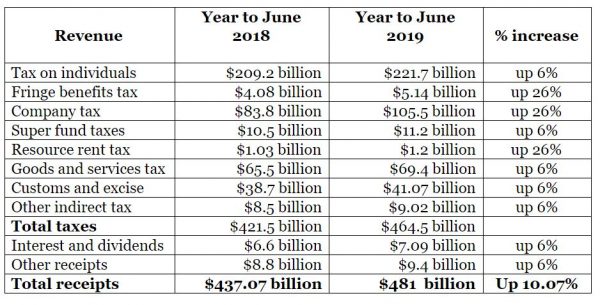 You will easily achieve this 10% overall increase without changing tax rates. The current global boom in trade and commerce will see to that. You just have to stop the blatant top end rorts.

Now, here’s the plan to sell this budget, Scott. Follow this and you will take a $16 billion surplus to the election.

You increased the gross debt by $254 billion. That’s $43 billion more than Labor stacked on in nearly six years — during the worst global recession in 80 years. You have reduced the nation’s net worth by a staggering $201.3 billion down to negative $407.3 billion!

This is your big chance, Scott. Almost certainly your last.

5 thoughts on “Psst Scott, here’s some some budget briefing notes if you need them”