How Tim Soutphommasane took the fight to the right

There needs to be, in every cause, people who fight for nothing other than that cause, and Tim Soutphommasane has been that, despite his ideological flaws.

He’s the epitome of mild-mannered, so it’s a measure of his effectiveness, and the state of the political-culture wars, that the departure of Tim Soutphommasane as racial discrimination commissioner has been a cause for such rejoicing on the right, and their determination to put someone in — Andrew Bolt, frozen Walt Disney, “The Skull”* — more to their liking. “Nothing can happen until TimSout’s out,” appears to be the refrain.

Well, if the entire conservative agenda on immigration and culture is being stymied by one diligent hardworking operative, then it’s in dire straits indeed. But whatever theoretical disagreements one can have with Soutphommasane — I would say that I once hoped he would marry the daughter of Imre Salusinszky, and hyphenate names Glebe/Fitzroy North style, but then I would have to report myself to him — no one can deny that he has taken the fight to the right, to their lazy fiction of a conservative silent majority of known views, from day one.

Soutphommasane’s liberal, mildly social democratic multiculturalism, isn’t much to my taste; I think his notion of a culturally engineered “Progressive Patriotism” — which was influential on Rudd and Ed Miliband for a while — is a misunderstanding of what patriotism and love of country, place, community actually is, but that’s of little matter. In multicultural societies shaped by waves of different migrations, and a founding Indigenous/non-Indigenous division, we are simply going to have to get used to the idea that our attachments to country are multiple, and to multiple objects.

Hand on heart, I am never really going to get used to large areas of the centre of Melbourne having become one vast Chinatown; but then, my Melbourne was one of Greek, Yugoslav, Lebanese cafes and bars, which had displaced the Anglo-Celtic world of pubs and caffs. There’s no point trying to suture these disjunctures with a patriotism of abstract values: the only result of such processes is Howard, is Brexit, is Trump. We need to go in the other direction, back into the ground of where we are, and acknowledge its multiplicities. Luckily, Tim has been so busy with the casual racism of so much Australian social life, he hasn’t had time to bang the drum for much of that stuff.

I don’t always agree with his stance on where state intervention and public behaviour lie either. But there needs to be, in every cause, people who fight for nothing other than that cause, and Tim Soutphommasane has been that. He has displayed fidelity to his project. It has coincided with, and he has been contributory to, the unmasking of the “silent majority” thesis of conservative social life, which bit the dust with the Yes victory in the same-sex marriage referendum. His companion Tim Wilson, that political neutrino, left not much more than a victory for McDonald’s, and the smell of a soapy fart; Soutphommasane has changed the national conversation. Well burrowed, in the bureaucracy, TS.

*a notorious neo-Nazi presence in Sydney in the 1960s and 1970s. I imagine the Festival of Dangerous Ideas is trying to find him, even as I write. 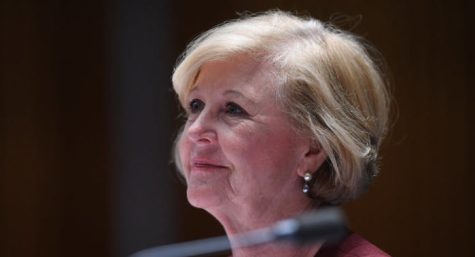 Wilson to battle his own ideology in rights factory

The Skull was a regular on the Sunday Domain soapboxes into the early 1990s, as some other regular commenters here would remember.

Such an excellent piece today Guy.
Especially that para on the centre of Melbourne.
That rang so many bells with me, I thought the fire brigade had arrived at the front door.
Tim Soutphommasane will be sorely missed.

[BTW. While I’m here Crikey. It would be *really* nice, if you could whip those hamsters in the website basement a bit harder, and get them to accept comments from subscribers using firefox. Chrome sux.]

More feedback for the Crikey hamsters: premium fibre optic speeds slow to duck’s waddle pace via Safari when linking to the Comments section. This mysterious behaviour has been happening for a few months now.

Agreed, Paddy, there are more authentically dangerous ideas in that single slidepast line about Chinatown than a decade of unintentionally hilarious festivilizing. The shocking thrill of found truth flapped coyly and coolly in your complacent face…no wonder Rundle never makes the Prog circuit cut these days. Am imagining the collective drop in air pressure in The Wharf main room as a thousand impeccably attuned Writers Fest sphincters flutter in panic, trying to recalibrate to the new bien pensant gauge. The send off for TS overall, the usual impeccably judged thread through a minefield. Earning those big bucks, as ever. Bravo.

I am particularly stupid, Jack.

Could you please tone down the flair dial a notch or two in your posting so i can understand your message. I’m all at sea.

*sigh* That’s exactly what he is. Exactly.

His personality is best detected underground in a tank full of water, and only faintly at that.

Ross ‘the Skull’ May is still above ground, alas.
He was a fixture at the Domain from the 70s, when he was bigging up on steroids, but today is a frail skeletal remnant.

Do you know if he, or anyone, still talks at the Domain on a Sunday?

I’ve actually been wondering the same thing lately.
My last visit was almost 10 years ago and there were two speakers, the thong clapper and a general, all purpose contrarian.
I might mosey along this w/e to see what’s what.

I think they were the same person!

As an ’80s suburban teenager the Domain was a lifesaver, where weird was normal and people talked about ideas. From the odious, like Skull, to the fascinating, like old Charlie the obsessive anti-Christian, the Mosley occultist (who introduced me to the term throbbing blue vein yellow custard chucker) and many others.
It was dying then and I can’t imagine it’s come back.
An old underground Australia of ideas and intellectual combat outside the ivory towers and the boardrooms, working-class and mavericks and weirdos battling it out.

I remember him proudly saying how he’d punched a train ticket collector to the ground for daring to be Asian and asking for a ticket. “My face is my ticket” he said as he smashed him, or at least that’s what he said. Never went to the trial to see what happened, but he was a strange and particularly unlovely character.

The Skull never had the ability or the balls to mount a soapbox – his sole effect was to stand and flex and try to intimidate.
After being shown the facts of life in fairly short order he ceased doing so but stayed on, as merely a pathetic caricature.