Witnessing the Anzac Day dawn service at Villers Bretonneux was a huge honour, as was awkwardly waiting in line at the portaloo with the next King of England.

One of the most impressive books I read as an impressionable teenager was Erich Maria Remarque’s treatise on the brutality and human waste of war, All Quiet on the Western Front.

Who would have thunk it, as they say, that 60 years later, I would be at the Somme for the centenary of the battle that the Diggers won to break the bloody Western Front stalemate; a battle that led to the German surrender at the eleventh hour of the eleventh day of the eleventh month to end the war that supposedly would end all wars.

I was proud and honoured to lay a wreath on behalf of 6 million Victorians at the Anzac Day dawn service at Villers Bretonneux. The most moving moment was when, in drenching rain, relatives of men who died on this day 100 years ago — grandchildren, great grandchildren — ended the ceremony by placing their own wreaths and flowers. Lest we forget. I met one family of 13 who had all made the journey from Australia to honour one of the fallen.

Also laying wreaths were the Prince of Wales, Malcolm and Lucy Turnbull, Defence Minister Marise Payne, Warren Snowdon (representing Bill Shorten, who was in Afghanistan) former PM Tony Abbott and French Prime Minister Edouard Philippe — who, the previous night, had induced tears with a beautiful, moving, speech about the special relationship between his people and the descendants of the Aussie strangers who had come to save them. And never made it back home.

That speech was part of the official opening of the Monash Centre at Villers Bretonneux — an amazing complex built to honour General Monash and the men who fought under him and died on foreign soil.

(The reason Abbott was there was because, when prime minister, he had stood on the same spot in 2015 to commission the centre and ambitiously promised its completion for Anzac Day 2018.)

Speaking of Tony Abbott, who says there can’t be cooperation between politicians who often don’t see eye to eye? Here’s photographic proof. Near the end of the dawn service, the heavens opened and we were drenched. The beanie-clad Member for Warringah, obligingly helped me struggle into a plastic raincoat. 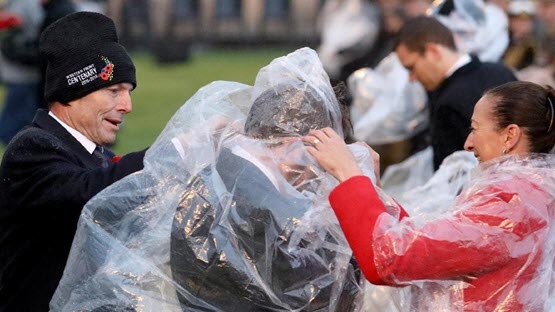 And speaking of photos. Where’s the paparazzi when you need them? After the service, as the drenched and bedraggled official party tromped off for coffee and croissants in a marquee, several veered away as nature called. It prompted an unlikely trifecta outside the French portaloos: Prime Minister Turnbull, Prince Charles and moi. After small talk, the PM obligingly pointed out that if we only needed a urinal we could use the right door but for a lavatory you’d go left. I went right … the heir apparently needed a throne and went left.

Just as well he hadn’t seen my tweet after the Commonwealth Heads of Government Meeting unanimously endorsed him as the next Commonwealth chairman: “Pathetic to see elected leaders from Australia, New Zealand, India and Canada doing all that forelock-tugging over a non-elected silverspoon about to replace his mum as Commonwealth head just because he was born in a castle”.

Maybe meeting outside a dunny was appropriate. And, despite recent reports out of London that Chuck always travels with his own toilet seat — he didn’t.

Lest we forget to pay: how Anzac Day became a commercial enterprise

Rundle: on Anzac Day in Dublin and a cause worth dying for

Meanwhile back in Australia the Banking RC was uncovering more and more acts of malfeasance by the banking sector. This sector rips off even the dear departed of a decade ago but pays so little tax. So where do you stand now on tax cuts for the corporate sector? Outside the loo in Villers Bretonneux?

No need to tell us why Abbott was there Dezza, reporters covered that, the real question is why the heck were you there?
What possible justification is there for spending tax payer money on a minor party senator being there, other than Mal trying to butter you up for a vote?
You only say you were there for
Victorians because your ego tells you that you deserved to be there, if it was happening to anyone else you’d see it for the waste it is.

I guess if you’re a former journalist and shock jock of Hinch’s quality and ilk – then his historically inaccurate statement “the battle that the Diggers won to break the bloody Western Front stalemate; a battle that led to the German surrender … to end the war” fits into the Aussie Cult of the Anzac. And I guess as a true and patriotic Aussie-Aussie-Aussie, you’re meant to ardently and fervently believe Hinch’s claptrap. I wouldn’t expect Crikey will actually bother to set the record straight – Germany losing its allies later in 1918, the collapse of its supply lines, the famines in the Austrian-Hungarian empire and in Germany, the worker uprisings and eventually the November Revolution in Germany – because of course the founding myth of our nation should never be questioned; even when it begins to eat away at reason and has to consume its own heroes to stay alive.

Derryn was the only politician I recognised at the service.

Fortunately, the rain stayed away till the end. I tried to put on the poncho the Department of Veteran Affairs provided, but gave up as it seemed to be useless. I noticed that it was made in Bremen and wondered if it was revenge for Villers-Bretonneux 100 years delayed.

After a lot of reading, I wonder whether the battle changed anything? If the Germans had retained Hill 104 (the site of the present Australian memorial) would they have been able to shell distant Amiens and disrupt British supply? Would they have been able to bring up the heavy guns needed? The Germans were virtually at the end of their supplies in the area. Having to drag guns by horses, which were in short supply since allied fliers were making a point of machinegunning them from the air, was becoming very difficult.

And even if they managed to do so, the British still had a lot of options, including spotting the guns from the air and shelling them with their own guns, which were much closer to their lines of supplies.

Not even Monash’s triumph at Hamel on August 8 (marking the start of the 100 day campaign) changed the course of the war. All it did was to convince the allies that the war could end in 1918 instead of 1919. Pershing didn’t want an Armistice in 1918. He wanted to be able to invade Germany in 1919 (to give America larger victories). Perhaps it would have been better if that had happened – the ‘stab in the back’ wouldn’t have been so plausible to the Germans.

I reread ‘All Quiet on the Western Front’ the week before Anzac Day in German. It certainly wasn’t an even semi-autobiographical book. Not least because the book’s narrator Paul Bäumer died on the very last page. Remarque was conscripted in 1917, arrived in Flanders in mid June, was severely injured on the first day of 3rd Ypres (better known as Passchendaele) at the end of July, and was still in hospital in October 1918. The stories he recounts were those he were told by other soldiers in the hospital (which can’t be identified as being specific battles).

“an amazing complex built to honour General Monash”. But Senator Hinch even more amazing is, other than providing another example of former Prime Minister Abbott’s faux patriotism, why on earth would Australia spend $100 million on it and virtually ignore the need for hospitals over here to rehabilitate members of the uniformed services suffering post traumatic stress. Another amazing fact is that Major General Harold “Pompey” Elliot led Australian troops at the second and victorious battle of Villers Bretonneux, not General Monash, though he was undoubtedly our greatest soldier and worthy of honour.

Wrong as well, sorry. Pompey was one of two brigadiers, the other being William “Tom” Glasgow. Both good leaders in battle, though Pompey was too intemperate for higher command, and both did a great job that day. Abbott could have given the Field Marshal rank to Monash instead of more gongs for Prince Phillip.

Ben.
Reply to  old greybearded one

Monash is a dead. Changing his rank a day or a century later is more pointless pageantry. And as this article shows we are doing enough of that.

It was remiss not to mention Glasgow who led the 13th as well as Elliot who led the 15th Brigade; however the point was that General Monash wasn’t present at Villers Bretonneux; though of course that wouldn’t have mattered to Abbott, in his desire to be associated with a great Australian hero.