A stealthy move by Tasmanian Liberal MP Sue Hickey to steal the Speaker's chair has seen her colleagues in the Hodgman government left with a fragile balance. But could it just be the past catching up with them?

Can a leopard change its spots? A zebra its stripes? That’s the question Tasmania is asking after lower-house Liberal member for Denison (Hobart) Sue Hickey, resplendent in a black-and-white op-art outfit, pulled a coup, got herself elected Speaker of the lower house with the support of Labor and the Greens, and announced that her vote for the Liberal program could not be taken for granted. The move is extraordinarily interesting for several reasons.

The Hodgman government is in with a 13-12 majority. The plan had been to put a veteran, former Attorney General Rene Hidding, in the chair. Hidding is part of the happy-clappy Christian political mafia run by Erica Betz, and centered around the Dutch-originate Christian Reformed Church, and would have been a reliable soldier.

Hickey is a different proposition altogether. She’s a former mayor of Hobart, socially liberal, knows everyone in the arts and kultcha community in Hobart, and is seen by many as an independent sailing under Liberal colours. At the tally room on election night, she came up to greet someone standing next to your correspondent, who gave her a barrage of choice life feedback. “Why are you being so insulting?” she said, hurt, as she beat a retreat. “Cos yr a farrrkin Liberal now!” she got back. 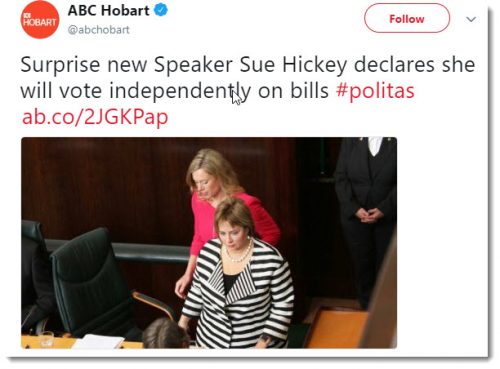 The move throws the Tasmanian government into a chaos so multidimensional that pol sci students should fly in and study it, like a rare mammal. Premier Michael Hodgman said that he wouldn’t govern in minority; now de facto he is. A no-confidence vote would produce either a 12-12 result with speaker abstaining — or a 13-12 vote with the speaker’s vote. Can the speaker vote in such a vote? Can someone read the Tasmanian state constitution and tell me?

But here’s the first of several kickers: a successful no-confidence vote wouldn’t necessarily trigger a fall of government. And almost nothing short of a block of frozen urine falling from a 747 and killing enough MHAs to remove quorum would trigger fresh elections. Tasmania, as I understand it — as I said, am not willing to read the constitution again, but I saw a three-hour Bhutto mime version of it at Dark Mofo 07 — has one of the greatest separation of legislative and executive polarities of any polity where the executive sits in the legislative. The parliament you voted for is the one you’re stuck with.

But wait, there’s more. Tasmania has had the Hare-Clark system for a century — indeed, invented it — and one of the Hare-Clark effects, with major parties, is to resolve the numbers towards the middle. That in turn demands a house of sufficient size to allow for the appointment of a speaker, and a working majority to withstand floor-crossings, conscience vote, and outright regional blackmail. But in the 1990s Labor and Liberals connived to reduce the House from 35 members to 25, to stop the Greens from growing to a party with up to 10 seats. This made 13-12 (10 Labor + 2 Greens)  results much more likely. The Libs have been hoisted on their own bastardry.

But there is yet still more! The Tasmanian system isn’t the Hare-Clark system. It’s the Hare-Clark-Robson system. In 1979, the Tasmanian system was changed so that the order of parties and candidates are randomised equally, through multiple batch printing and shuffling. The aim has been to minimise the donkey vote. But de facto, it weakens the party system altogether. Every Hare-Clark-Robson election is a statewide exercise in game theory trialling, since every five-member ticket for a party in a seat is faced with the decision of whether their main competition is from outside or inside their list.

It’s rational, in Hare-Clark-Robson, to direct a lot of fire against your own team. In 2014 Denison returned only one Liberal, Elise Archer. In a non-Robson system, she would have been top of the ticket, with Hickey looking to get up on her overquota. Instead, the intra-Denison, and wholly collegial of course, rivalry between Archer and Hickey was the talk of the town.

Tassie parliamentary system unworkable, even for a ministry of silly walks

Sue Hickey is a long-time small l Liberal who had a falling-out with the reactionary right years ago. She is also very ambitious, which was taken advantage of by Labor and Greens. We may actually end up with an independent speaker. The premier is not Michael Hodgman, but his son, Will. Lift your game Guy!

I reckon Michael Hodgman would probably make a better premier than Will, even though he passed away several years ago.

“…part of the happy-clappy Christian political mafia run by Erica Betz…”
Has a well-known Tasmanian Senator just affrrmed a different gender than previously? 🙂

Brings to mind the old proverb – “hell hath no fury like a woman spurned”. Sue Hickey was rejected by the Liberal party’s all-male, largely old, preselection committee for Senate candidacy in spite of being far more able and appealing than most of the incumbents. Good on her I say – although I am not a Liberal voter I can recognise talent when I see it, as I suspect most voters can.

..except the Shakespearean quotation refers to a woman SCORNED. Often misquoted as “Hell hath no fury like a woman’s scorn”

As heartening as this development might be, it is the only good thing to result from the utter rout of the Greens.
Given the state’s recent history – since 1970s – and one of the better electoral systems it might have been expected that they could stop the suicidal infighting, nepotism and sheer stupidity for a greater purpose.
There’s a story for grundle to look at when he’s finished with the Batman navel fluff examination.

Matthew Groom was also preselected by the Libs prior to the 2014 Hare Clark festival. He did not recontest his seat at the recent iteration. More fact checking required.
One has to wonder how much of the joy one feels when reading GR’s gonzo magic around the US prez feasts needs tempering when he makes these blues reporting the home front.

Indeed Matthew Groom topped the poll for the Liberals with more than twice as many votes as Elise Archer, and the Liberals received 2.3 quotas, while Labor only had 2.03. Greens received 1.27. This year Liberals 2.3, Labor 2.5, Greens 1.05.