The links between the Liberal Party, the big banks and the financial planning sector seem to go beyond the ordinary relationships between business and politicians.

Malcolm Turnbull is a former banker, although that’s just one of several careers he’s had. Kelly O’Dwyer, who has carriage of the financial services portfolio, is a former National Australia Bank executive; she has retained links to NAB via the bank’s sponsorship of Liberal fundraising events. Her ministerial predecessor Josh Frydenberg was working for Deutsche Bank when he won preselection for Kooyong. His portfolio predecessor was Arthur Sinodinos, who is another former NAB executive; Sinodinos commenced the Abbott government’s attempt to repeal the Future of Financial Advice reforms. Victorian senator Jane Hume is another NAB alumna, who also had stints at Rothschild and Deutsche Bank — although she also worked at industry super fund AustralianSuper. Gold Coast MP Bert van Manen and former Liberal senator Cory Bernardi had both been financial planners before entering parliament.

[Liberal owe more than an apology on royal commisison. A lot more.]

The financial planning profession itself is closely aligned with the Liberals. Traditionally, that has reflected that the core clientele of financial planners, wealthy older people, are the Liberal party base. But they also share a mutual hatred: industry superannuation funds. Labor’s championing of the hated FOFA reforms also deepened the sector’s already strong affinity for the Liberals — the two major financial planning associations were delighted when Tony Abbott was elected in 2013.

The financial planner view of the political world can be obtained via the industry’s outstanding publication, Money Management, edited by veteran journalist Mike Taylor.

“More than 60% of survey respondents said they believed a Labor government would be unduly influenced by industry funds,” Taylor wrote ahead of the 2007 election, having surveyed planners.

“With the election of the Rudd Labor government in 2007, the industry funds had secured an ally on the Treasury benches in Canberra,” he wrote four years later.

Labor’s calls for a banking royal commission represented “a continuation of a theme pursued by the industry funds movement almost from the very day the Coalition government gained office and began looking to prosecute its agenda,” Taylor said in 2016.

Former and future staffers from all sides of politics often end up working as spinners or corporate affairs types in the sector too. One of the most interesting examples in recent years is Andrew Bragg. Bragg, formerly from the Commonwealth Bank, was a senior executive at the Financial Services Council. He then shifted to the Liberal Party think tank Menzies Research Centre, before becoming acting federal director of the Liberal Party last year after Brian Loughnane’s departure. He then moved to the Business Council of Australia where he is now working with Loughnane on the Council’s campaign for the government’s company tax cuts.

The big banks, AMP, foreign banks and major insurance companies are all members of the BCA; the broader sector makes up a fifth of the BCA membership. The BCA was delighted when the Abbott government established a royal commission into trade unions, but opposed a banking royal commission as “an unwarranted distraction” because the sector had “highly empowered regulators”.

Another former Financial Services Council executive, Martin Codina of BT Financial, became Josh Frydenberg’s chief of staff when the latter was appointed Assistant Treasurer in 2015, with responsibility for financial services (although, amusingly, Frydenberg had moved his super into an industry super fund).

The relationship between the Liberals and the financial sector isn’t merely organic. According to Australian Electoral Commission figures, since 2010, the finance sector has donated $5.8 million to the Coalition; in the same period, it has given $4.4 million to the the ALP. The big banks and AMP, the FSC and the Financial Planning Association have given the bulk of that: $3.85 million to the Coalition, $2.65 million to Labor. The Coalition was a particular beneficiary in 2013 and 2014 when the government was seeking to repeal FOFA (AMP, which is relatively even-handed in its donations, did not make any donations in 2014-15). 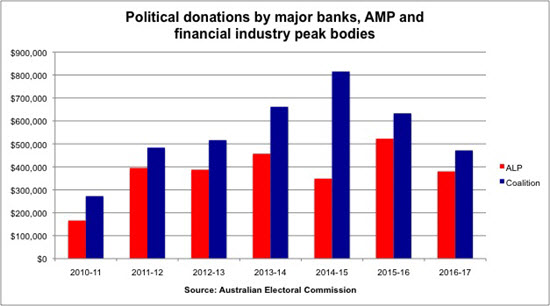 For most of the last decade, the relations between the Liberals and the financial services sector have been beyond the ordinary relationship between business, which understandably favour more business-aligned parties, and politicians. The ties of money, personnel and aligned interest are deep and rich. The Liberals, the financial services industry and the Business Council — until political calculation forced the Liberals to shift position — operated as three separate points of the same entity.

Update: NAB has contacted Crikey to advise that it has made no political donations since May 2016, when it adopted a new policy of not donating to political parties. Its sponsorship of Kelly O’Dwyer’s fundraiser was in April 2016.

We keep putting our fate in the hands of political donors. What will the cost be this time?

If Crown is unfit to hold a licence, then politicians are unfit to govern

Remember what happened to those bad bankers? Will women fare any better after [email protected]?

god this is getting more and more infuriating.
What is Ken Henry doing staying involved with these disgraces.

The table from the AEC showing the donations to the torys confirms what we know – the party’s definition of honesty is staying bought.
The largess to Labor may not have been as generous but does anyone imagine the effect not the same on the meretricious mediocrities who infest politics these days?
“Labor, not quite as venal as the torys” – yeah, that really provides reassurance and encourage the voter.

Bernard, this is a good start: you’ve established intimate access through industry contacts and funding — which isn’t just true for the banking sector, but can certainly distort government thinking. However, you’ve pitched more than that, and so has Helen. You’ve both argued that we should expect to see deliberate, willful concealment of systematic, sector-wide fraud — which to me smacks of corruption. So I think you need to close the circle, and show:

1. Who among existing or past coalition cabinet, stand to benefit from abusing power to grant inappropriate favours to the banking sector, and how;
2. Which cabinet-members or backbenchers in the Coalition were aware of it and opposed it, and how any objections were suppressed; or else how maladministration so ‘widely known’ was nevertheless never challenged, even by backbenchers with marginal seats;
3. Whether any similar approaches were also made to Labour as the banking royal commission discussions heated up, and if not, why not;
4. Why, despite your allegations, the major banks ended up agreeing to a Royal Commission; and
5. Who in the past or present government is presently afraid of Royal Commission findings about political corruption, and how the terms of reference may have been manipulated to prevent them.

Or if you don’t feel the evidence will ever support a coherent answer to these questions, you might prefer to offer a more modest alternative, such as negligence, inexperience, poorly-managed conflicts and ideological zeal (which explain a great deal of government mismanagement.)

In the latter case, I’d suggest that a constructive proposal wouldn’t centre on demands for some empty Party apology or personal apologies (nobody will offer such self-humiliation unless they must, and it’s only ever symbolic anyway), but could include insistence of greater distance between politicians and the financial sector in future, along with more pro-active, diligent and effective regulation across the entire financial sector.

Ruv, all good questions. I think I can answer number 4 though. They ‘agreed’ to it because they realised they had no option, and it was better to rip the band-aid off, albeit slowly, while Turnbull could write the terms of reference. There is nothing but self-preservation in their minds, and this was the least worst option.

I think you may be right about that, DB, but my question was more along the lines of: if the banks think they own the government, why accede to public pressure? A more plausible explanation is that the banks know they don’t own the parties in government, and that democratic processes sometimes trump bought influence.

Rav, have you heard of The Gordian Knot?
Reportedly cut in half by Alexander The Great, when told that he had to unravel it in order to become ruler of the state of Gordia, during his conquests.
A more decisive, cutting style to your commentary might better suit your anticipated readers, than the convoluted, Gordian Knot style arguments that you seem to prefer that should unravel?
I find your style tedious, so might others?
Just trying to help make your efforts more accessible than they are at present.
I am assuming of course that you might actually care that more read and understand your efforts.

Covenanter, I’m beyond sorry that you found it tedious to read and reply to a comment addressed to someone else.

While I cannot go back and edit it to lighten your burden, I can only suggest that you talk to whatever sadistic boss is making you perform this face-aching task at eight past ten on a Wednesday night, and ask for more meaningful and productive work.

So there you go gov, the very sort of style I was looking for, you can do it!

Have you seen a lot of troll comments here?
Me either.
Something to bear in mind.

A part from sensational headlines and a huge bill for taxpayers, remind me what benefit has the Royal Commision into unions provided?
There where several correspondents who said yesterday they predicted the Banking Investigation would amount to very little when we look back in in the five 5 years time.

An industry ripping us off for funds to buy the re-election of a government whose main interest is anything but ours.
A wunch of bankers?