Alan Jones is in Brisbane to defend a defamation case brought against him relating to his coverage of the 2011 Queensland Floods. And other media stories of the day.

Deadly day for Afghan journos. Ten journalists have been killed in Afghanistan in the deadliest day for journalists in the country since the Taliban fell. Nine journalists were among 25 people killed in twin bombings in Kabul, and BBC Afghan service journalist Ahmad Shah was killed in a separate attack in Khost.

The journalists killed in Kabul were covering a bomb blast in the city, standing near the site of the explosion when another bomb exploded. Reuters reports that journalists were deliberately targeted, quoting interior ministry spokesman Najib Danesh as saying the second bomber showed police a press card before joining the group standing near the first site.

Among those killed was AFP photographer Shah Marai, who had been covering conflict in Afghanistan for 15 years, and wrote an essay for CNN about his experience in 2016 under the headline, “Hope is gone”. 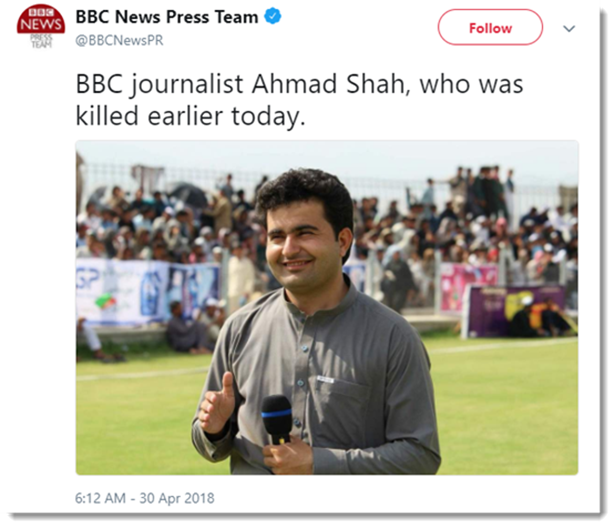 Alan Jones in defamation action. Sydney shock jock Alan Jones is in Brisbane defending a defamation case brought against him by the Wagner family, who says Jones repeatedly defamed them in broadcasts about the 2011 Grantham floods in which 12 people died. The trial started yesterday in the Supreme Court of Queensland. The ABC reports that the Wagners’ lawyer Tom Blackburn argued Jones defamed the family by suggesting they were responsible for the deaths. The Wagners were exonerated in a Commission of Inquiry in 2015.

BuzzFeed‘s new politics show. BuzzFeed Australia and Twitter announced this morning a new politics show OzPol to launch next week for a five-episode pilot season. Hosted by politics editor Alice Workman, the show will run on Twitter for between 45 and 60 minutes, weekly, while parliament is sitting.

Daily Mail settles photo pay case. Daily Mail Australia and freelance photographer Richard Milnes have settled a court case brought by Milnes over unpaid invoices. Milnes alleged that Daily Mail Australia had used photos he’d taken and sold through an agency, and then failed to pay for all the images the site used. The matter was due back in court this week, but has now settled, with confidential terms. Daily Mail Australia managing director Peter Holder said: “The proceedings have settled on terms agreeable to both parties — and each party paid their own costs.”

ABC corrects Anzac Day interview. The ABC’s PM program has corrected the record on an interview it ran last week with historian and author Jonathan King, whose Anzac Day feature for Fairfax was the subject of a particularly long and detailed correction published on the weekend. King’s piece incorrectly placed Sir John Monash at the battle of Villers-Bretonneux, among other errors, which Fairfax detailed in its correction.

King has written extensively on World War I, including a book about Anzacs on the Western Front, and was interviewed by PM from Villers-Bretonneux where he was attending the opening of the new museum named after Monash. He was also interviewed on 2GB on Anzac Day by Alan Jones. In correcting the story, PM interviewed historian Joan Beaumont and journalist Peter Greste, whose documentary about Monash aired on the ABC recently.

Fox board shock resignation. Is 21st Century Fox moving into play? A day after UK hedge fund TCI was revealed as having lifted its stake in 21st Century Fox to 4%, board member and hedge fund founder Jeffrey Ubben has suddenly departed the Fox board. Ubben’s fund, ValueAct, owns a 6.7% stake in Fox B-class voting shares, subject to a standstill agreement with the rest of the board that capped his holding at 7% so long as he remained a director.

The statement from Fox spoke of love and light: “Mr. Ubben’s resignation from the board is not due to any disagreement with the company on any matter relating to the company’s operations, policies or practices.” The Wall Street Journal reported on the weekend that Ubben had stepped back as chief investment picker for ValueAct to launch a new project, and was likely to make new investments and join some of those boards. Does that make ValueAct a seller?

If ValueAct and TCI hook up, their combined stake of around 10.7% is actually more than 17% because the Murdoch Family Trust will be unable to vote its shares at a shareholder meeting. If both funds remain shareholders in Fox they will get Disney shares once the break up happens, but it’s doubtful that they are interested in Disney shares. — Glenn Dyer

Glenn Dyer’s TV Ratings. Seven’s night thanks to MKR (1.68 million nationally). Nine hung in, Ten finished the Bachelor in Paradise with less than 1 million viewers nationally tuning in — 992,000 for the proposal, 852,000 for the foreplay. The 16-39s demos were what Ten wanted, just ahead of Nine with The Voice (1.35 million viewers nationally) and MKR for Seven. MKR had the best demos on the night, especially in 25-54, its target group.

But in total people, the ABC’s usual reliable Monday night news and current affairs line-up lifted it into third spot, as well as in the main channels, ahead of Ten. Ten now has a weak week ahead before MasterChef starts next Monday. Read the rest on the Crikey website.