Some inflammatory pamphlets that caused a stir during the postal survey are back, and they raise a more general question about what standards we should accept in our mailboxes.

The postal survey was a painful time for many Australians with yes and no messages popping up in family gatherings, TV ads, billboards and even the humble mailbox. One of the more eyebrow-raising materials was an anti-LGBTIQ pamphlet from a group of infamous Adelaide street preachers which made headlines after Australia Post delivered it to Melbourne homes last July (without knowing the content). AusPost ceased delivery when they discovered it breached acceptable community standards.

Nine months and a change to the Marriage Act later, and these pamphlets have reappeared in a number of mailboxes in Adelaide and Canberra — with no involvement from AusPost. 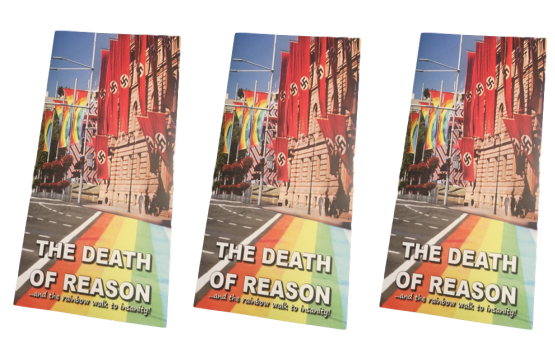 After receiving one in ACT, Crikey contacted the Adelaide street preachers and asked if they had received complaints. “[They come from] people who don’t read the flyer and ‘judge the book by the cover’,” they said via email. “These people range from neo-Nazis to people who just fly off the handle with the least amount of provocation.” They stated, in their view, “complaints equal compliments”.

So, with these types of items clearly not solely contained to the postal survey, what are you to do when homophobia (or any matter of hateful speech for that matter) slides into your mailbox?

What does the law say?

Overall, police media told Crikey it was more common for them to handle issues relating to online harassment. But, for all addressed mail, part 10 of the Criminal Code Act, 1995 makes it an offence to use the postal service to make a threat or to menace, harass or cause offence. So if a person receives offensive mail with their name on it, they should report it to police.

Police spokespeople from NSW, VIC and ACT said it’s hard to quantify how common hate mail is because first it has to be reported to local police, then there are many ways it could be recorded and referred to specialist investigative squads, making it hard to collate stats.

For example, letters of extortion may be investigated by the Robbery and Serious Crime Squad, or letters relating to national security will be referred to the appropriate Commonwealth agencies. NT Police said offences regarding to physical mail fall under federal law: the Australian Postal Corporation Act 1989.

Are there other channels?

Australia Post is a small player in the unaddressed mail delivery service — less than 10% goes out through them. But a spokesperson told Crikey that AusPost guidelines suggest offensive mail be handled by contacting the Distribution Standards Board, administered by the Australian Catalogue Association.

The Australian Human Rights Commission is another option. The Commission handles complaints in accordance with the provisions of the Australian Human Rights Commission Act 1986. But in terms of general flyers, the only basis for a complaint would be under the Racial Discrimination Act. All other federal discrimination legislation requires a relationship between the complainant and respondent in a defined area of public life — such as employment, or the provision of goods and services.

This means vilification and offensive language between strangers (except in the case of racial hatred which can be applied more broadly) falls outside this at a federal level. So if one of the Adelaide street preachers handed me their flyer in public, I would be no more or less able to take action than if it were delivered to my mailbox. But if an employer or landlord, for example, delivered something homophobic than I’d have a case.

This is different at a state level, with the ACT anti-discrimination spokesperson saying they’d received many complaints about discriminatory materials during the postal survey. If a person receives material that constitutes vilification they can bring a complaint forward, or if they don’t want to bring it themselves or aren’t personally aggrieved, the commissioner can also commence an “own motion” investigation.

The process for the complaint involves the respondent being contacted to try to resolve the matter through a conciliation process — outcomes include agreement to cease the behaviour, apologise and pay compensation. However if the matter isn’t resolved, then the person may take the matter on to the ACT Civil & Administrative Tribunal for determination.

They said “in one case where the recipient didn’t want to take formal action we helped them draft a letter back to the author outlining how they could be in breach of various laws and asking them to cease distributing the material or they would take further legal action”.

Waging a war against online abuse is an uphill battle. The laws are famously insufficient, and the “just log off” culture is pervasive. But considering how opaque legislation is in dealing with physical hate mail, it is little wonder that it’s tricky to get action on cyber bullying and harassment.

If we have to vote on marriage equality, can’t we do it online?