Victorian Premier Daniel Andrews fired off some tweets about the media playing into the "anti-vax playbook". We checked that with the experts.

Last month, Victorian Premier Daniel Andrews fired off a couple of tweets, based on a screen grab of a Facebook comment, suggesting pictures of crying babies on news stories about vaccinations are “straight from the anti-vax playbook”.

Andrews said images of babies crying with a “comically large needle” played into the “harmful agenda” of anti-vaccination activists, and that he’d try to get news outlets and government sites to instead use stock images that “show the absolute necessity of vaccines”. 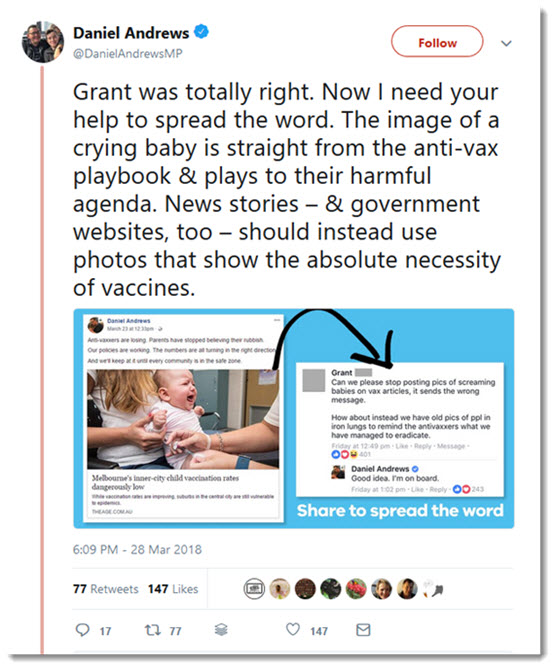 But, while experts say those images aren’t helpful, they’re unlikely to actually stop anyone vaccinating their child if they were otherwise going to. And politicians leaping in on what is a social norm can actually make health professionals’ jobs harder.

Sydney Nursing School associate professor Julie Leask, who’s studied media representation of vaccination for more than 20 years, told Crikey that the media has less of an impact on parents’ decision to immunise than is widely accepted.

“We routinely underestimate the critical capacity of mothers to see that yes, vaccination is uncomfortable but the benefits outweigh that,” Leask said. “In the wider scheme of things, images like that are a drop in the ocean of things that impact the decision to immunise or not.”

Leask said the vast majority of Australian parents chose to vaccinate their children, and Australian programs were robust.

“We have a robust system that can be open to critics. That’s science. Where you get vaccination used as political opportunism, you may get politicians rushing to policies that are ultimately not great for the whole vaccination enterprise … While strong support for vaccination is vital, politicisation doesn’t help that process.”

Leask said politicians jumping on the campaign trail for vaccination could lead to policy-on-the-run, such as the No Jab No Play policy, which the experts we spoke to said had the potential to punish un-immunised children twice, by then missing out on the social and education benefits of childcare.

Catherine Helps, a midwife and children’s nurse and PhD candidate at the University of Sydney, has been interviewing parents who choose not to vaccinate in the Byron Shire as part of her research, and told Crikey that most families she’d spoken to didn’t consume mainstream media.

“The decision not to vaccinate is highly complicated and it’s a decision these parents take very seriously,” she said. “It’s not something they do on a whim or because they’re scared of the pain of a needle to their children … The parents I’ve spoken to who’ve weighed up everything they could find including from health department sources.”

Helps said that while images of crying babies shouldn’t be go-to images to represent vaccination, tweets and comments from politicians and other leaders that presumed to understand why parents vaccinate or not, could make it harder for health professionals to do their jobs.

“There’s a problem with ostracising people and if we continue to do that, even if in small ways, that can add to the us and them and can make it harder to have conversations about it,” Helps said. “It sets up the rest of the community to feel like they can say whatever they want, like it’s normal to be disparaging because our politicians are doing it.”

Murdoch Children’s Research Institute senior research fellow and paediatrician Dr Margie Danchin agreed that Andrews’ take was simplistic, but the impact of those images on parents’ decision to vaccinate hadn’t yet been directly studied.

“I don’t think it helps but don’t think it’s going to stop someone vaccinating. The decision making around vaccinating your child is more complicated than that … The most important predictor is whether they’ve had vaccination recommended by a health provider.”

Danchin said anti-vaccination websites and campaigners had a “powerful influence” over parents who were already hesitant or refusing to vaccinate (around 20%), but about 90% of parents relied on information from healthcare providers.

Andrews didn’t respond to Crikey’s request for comment, or information about research or expert opinions he based his tweets on, and any action he’d taken to pursue it.

Leask said the bigger issue for health professionals with stock images was that they often don’t show correct vaccination technique, and the people in the images are usually white. She suggested Andrews should instead fund a range of stock images for use by government and news websites — a suggestion Crikey has also put to his office.

And what exactly are the “social and education benefits of childcare”? Would they in any way be analogous to the studies that have shown that children under 3 who spend more than 20 hours per week in childcare exhibit the same symptoms as with the death of a parent? Nar, more tax receipts from dual income families.

Also, hahahahaha, if the issue for health professionals is that the people in stock images are white (in a majority white nation), then there is no issue – unless you’re a racist of course.

It seems anti-vaccinators are a diehard bunch [pardon the pun] and nothing will change their beliefs – on the other hand the other side don’t really care deep down but pushing a trendy barrow, for instance as quoted ‘politicians tended to see vaccination as a vote-winner.’ Perhaps there are too many vaccines some of which are not really essential-take the flu panic each year-makes good news, covers all media – but if vaccination rates have been increasing each year and each year the rates of influenza goes up — look at last year — then it shows clearly mass vaccination doesn’t work. Perhaps only the vulnerable should be vaccinated.

Crap argument re too many vaccines.
The more virulent flu strains are caught by more people and this is what happened last year including to me. However vaccination lessens symptoms if you actually catch it.

Broad statements about only vaccinating vulnerable people ignores the fact that once the un-vaccinated rate gets above 10-15% there is a permanent pool of carriers for a wide range of diseases (polio, mumps, chicken pox, measles , whooping cough etc etc) which results in all un-vaccinated people being vulnerable (herd immunity), and I challenge you to see a 6 month old with whooping cough and say we should not vaccinate.

Parents who do not have their children vaccinated when they themselves are most probably being provided immunity to the above diseases via vaccination are basically selfish. It is similar to educated people saying they don’t want their children to attend school because they may be taught something the parents do not agree with.

Sorry Crikey, but any article on the complexities of immunization, that fails to even *mention* the issue of “herd immunity”, is doing everyone involved a major disservice.

Three of my friends tell me that they have a child that became autistic within 2 weeks of vaccination. Two of them are nurses. Slow learners?

What’s the colour of their skin?

2 white and 1 brown. Will you explain of the importance of skin color?

Well, it appears the article has been re-uploaded with only the first 2 of 19 paragraphs in today’s Crikey Insider, but I was referring to Ms Watkins’ quotation from Julie Leask that “the bigger issue for health professionals with stock images was that they often don’t show correct vaccination technique, and the people in the images are usually white”; see my first comment, above.

Since showing white people is an issue, I assume that by extension your nurse friends being white negates their professional/personal expertise.

We’re living in the upside down, it turns out, and so suggesting that all people with a certain skin colour have homogeneous opinions, intelligence, or political beliefs is not the very definition of racism anymore.

Actually I stand corrected on the article being re-uploaded in part – my subscription has merely expired. Decisions, decisions. Should I support anti-white identity politics in my daily journalism?

very good point, growth and development is rapid at the same stage of life that vaccinations are generally scheduled.

Autism is notoriously difficult to diagnose.

Like allergies, ADHD, gluten and a plethora of other lucrative conditions, usually the preferred treatment is parentdectomy.

Autism is over diagnosed.
Obviously there are genuine cases which are extremely difficult for parents to manage. These parents have my admiration and should also have more support.
On the flip side many parents can’t face that their kids are always going to be comparatively anti-social, unintelligent or withdrawn…. parents just need to ensure the child is able to develop to the best of its potential not just write them of with a label for life and a NDIS plan that solves nothing.

Autism doesn’t suddenly appear like… well, mumps. It takes long and careful observation to decide if a child is autistic.

“We want politicians and leaders to support vaccination, but hyper-defensiveness of vaccination can lead people to get things out of proportion in terms of anti-vaccination.”

As we know the higher the Greens vote in an electorate, the lower the vaccination rate.