AMA all over the place on Medicare, Democrats miss the old Kanye, and the hunt for Anzac day hot takes.

Remember when the Democrats endorsed Kanye West for President? The AMA are just all over the place, and we take a look at the muted search for Anzac outrage.

AMA flip flop. Good thing the Australian Medical Association is full of doctors; AMA president Michael Gannon is in serious danger of putting his back out somersaulting on funding for the NDIS.

Just two weeks ago Gannon was attacking Labor for failing to support the government’s increase to the Medicare levy to fund the NDIS, announced in later year’s budget. Labor only supported increasing the Medicare levy for high-income earners, which had Gannon accusing Bill Shorten of using the NDIS “as a political football”.

Now, with the government suddenly discovering that, gee, the politically damaging levy increase doesn’t need to go ahead after all, you’d think Gannon would be attacking Scott Morrison even more strongly than he’d criticised Shorten. But wait — now Gannon is “agnostic about where that money comes from“.

So no need to hold the government to the same standard. With a backflip-with-pike like that, Gannon should think about a career in politics…

Democrats no longer go West. Speaking of flip-flopping, here’s a classic of example of why political parties would be wise not to hitch their wagon to a famously volatile megastar with a huge audience.

Rapper, tycoon and bona fide eccentric Kanye West has, over the last few days, burnished his credentials as a kind of hip hop Morrissey. West has inflamed a particular crescent of the internet by tweeting his support for far-right media figure Candace Owens, stating he “loves” Donald Trump, and tweeting pictures of his signed Make America Great Again hat. 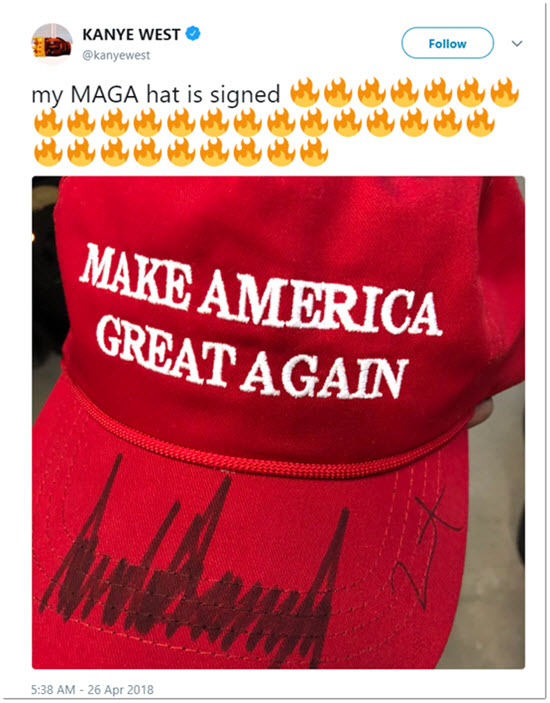 Trump, ever susceptible to high-profile flattery, has of course, noticed. 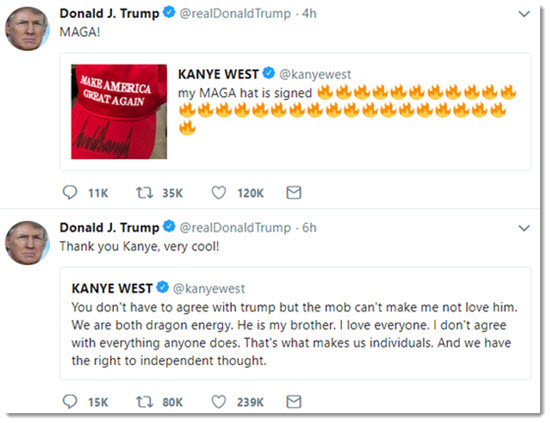 All this can’t be what the people who run the Democratic Party’s Twitter account when they… kinda endorsed him for president.

For those not familiar, back in 2015, West ended an acceptance speech at the MTV Video Music Awards by announcing his intention to run for president in 2020. Many assumed it was stunt, but the DNC Twitter account seemed to take it more seriously: 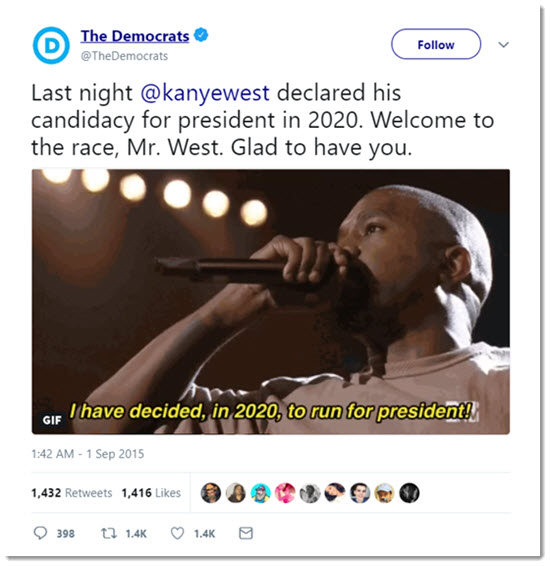 In retrospect, it may not have been the best idea to assume the mega-rich, famously volatile West would be on your side — and that it would be good for your credibility if he were.

Anzac day palava fails to materialise. In the lead-up to the one-year anniversary of the Facebook post that launched 1000 thinkpieces, there were many who asked who it would be this year who would be guilty of the Anzac thought crime. There were a few half-hearted contenders, if you’re into that sort of thing.

Firstly comedian Catherine Deveny got oddly annoyed at the use of the word ‘service’ being associated with the armed forces, tweeting: 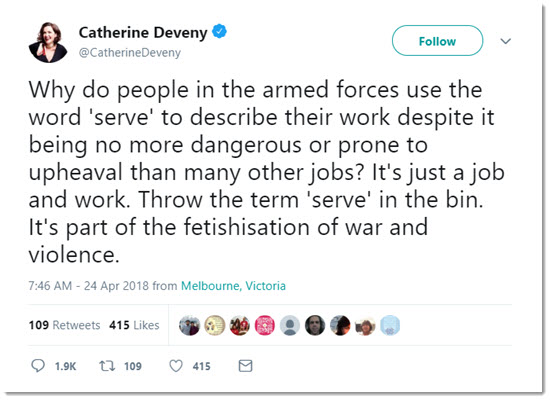 The Australian managed to sigh out a piece about the barely audible outrage that followed (it gets extra marks for including a tweet saying no one should give Deveny the attention she so clearly craved).

Then Michael Leunig’s Anzac Day cartoon — hitting the dead centre of the Venn diagram of Leunigisms (twee, melancholy and incomprehensible) — earned a rebuke from radio host Neil Mitchell and not much else.

Perhaps we’re all just done with outrage for a bit, or was Yassmin Abdel-Magied’s crime about more than insufficient patriotism?

Who will guard the guards?

PLEASE Crikey! Don’t join the throng of writers who do not think when they write-about a “one-year anniversary”.

Yassmin’s “crime” was to be a woman, a muslim and not anglo-saxon. Had she not been all three of those things I suspect the RWNJ industry would have ignored her.

No people were unhappy that she who benefited from abandoning her country of birth to improve her station in life in a universally superior society/country, feels the right to criticize the sacrifice of individuals who died defending that society/ country.
Surely a genuine protest by her would be renouncing her Australian citizenship and returning to the freedoms enjoyed by women in muslim africa… boka haram is really just like a blind date isn’t it?

Doctors won’t help Michael Gannon if his backflip puts his back out. Doctors aren’t good at that sort of thing. He’ll need a chiropractor.
Catherine Deveney should have put on a hijab before she tweeted. Guaranteed at least 50,000 words of instant outrage from Limited News.

YAM is no longer relevant – she didn’t send the rightards into frothing, eye swivelling overload.
So, who’s next in the confected outrage roster?