Data analysis by writer Ketan Joshi has revealed the extent of the Australian media's obsession with Abdel-Magied.

It’s been just one year since Yassmin Abdel-Magied’s now-infamous Anzac Day Facebook post: “Lest we forget (Manus, Nauru, Syria, Palestine)”. That post (which Abdel-Magied edited and apologised for) marked the start of a year in which about 207,979 words were written about her, according to data analyst and writer Ketan Joshi.

Almost half those words (47%) were published by News Corp (including the 25% in The Australian and Daily Telegraph, the most prominent contributors), and Daily Mail Australia publishing 17%. 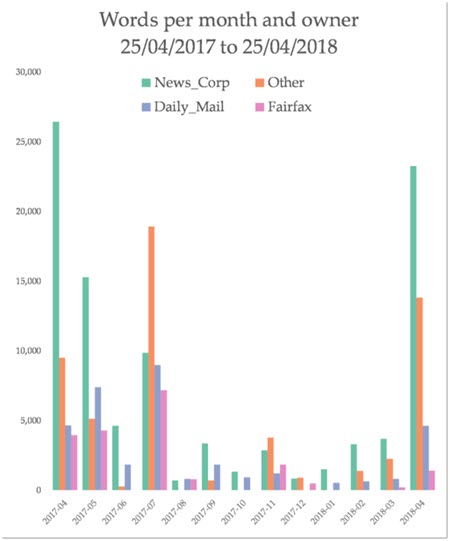 Joshi wrote that the coverage was clearly targeted, showing a “racial element in how speech will be policed and punished”. He found flurries of content published when Abdel-Magied commented on race in Australia, and a disparity in coverage prompted by other prominent, white people expressing similar sentiments to Abdel-Magied’s Anzac Day post last year. “The racially-tuned settings in the social punishment of speech emerge so clearly in the omissions, exclusions and forgiveness,” he said.

The rules are different for young, non-white Australians. We tread with ridiculous and exhausting caution, even as we’re the subject of frequent casual and formal racism … These are the varied and violent anxieties of the safe, comfortable and free. Your speech is free in direct proportion to the wavelength of light your skin absorbs. It’s not worth even discussing how this might be countered without first admitting we have a serious problem that is hurting energetic, articulate and successful young Australians.

Read Joshi’s study and his reflections in full on his website.

Attack on Yassmin Abdel-Magied is the act of myth-loving, right-wing cowards

Free speech protects the speech that you disagree with. Not the opinions that you want to hear. Authorised opinions hardly warrant protection.

I’m going to have my own attempt at attracting News Corp’s (and Essendon supporters’) ire:

Poppies are for Remembrance Day; Rosemary is for ANZAC Day.

ANZAC Day is a commemoration of what was, in substance, the entry point for Australian and New Zealand troops into the Great War, and the birth of the ANZAC spirit since followed by countless future generations of servicemen and servicewomen whose blood had not yet been spilt on Flanders Fields. More than just acknowledging the dead through the dawn service, ANZAC Day honours all those who have served, including (perhaps particularly) those who survived, through activities such as the parades, the flyovers and the two-up rings.

In contrast, the tradition of the poppy was inspired by the poem In Flanders Fields by LTCOL John McCrae (https://www.awm.gov.au/index.php/commemoration/customs-and-ceremony/poppies), and the red of the poppy signifies and memorialises the blood shed through the war. It marks the end of sacrifice, not its beginning.

It is time for those awful Essendon jumpers commercialising the poppy to be ditched. Handing out sprigs of rosemary to all entering the MCG would be much more appropriate.

This corruption of the symbolism by wearing poppies on ANZAC Day shows, to me, that people don’t really understand what they are commemorating.

“frequent casual and formal racism” When someone who tries to sell the benefits of Sharia Law to Australians softly hits a raw nerve with an ANZAC comment, she can expect what she got. Free speech is regularly silenced nowadays by accusations of racism. Critics of Islam are branded racist, and it terrifies the mainstream media. Ayaan Hirsi Ali could not come to Australia to appear on the ABC because of death threats. Tommy Robinson in the UK has made a video for showing in the event of his death. He is continually facing death threats
Islam is not a race, and it is not even a Religion. It is an ideology encompassing law, business, banking religion and more. Islam is the most significant threat to freedom of speech ever.

” Critics of Islam are branded racist, and it terrifies the mainstream media” . The bulk of those 200,000 words appeared in mainstream media so “terrifies” might be a bit of an exaggeration.
I’m no fan of Islam but Tommy Robinson (not his real name) doesn’t come across too well either, as for AHA … we already have Rita Panahi here in Oz, enough already.

For all that YAM copped it from the moron brigade for the caricature fed to them, she made her self impossible to defend by being so ignorant of that upon which she pontificated – little things like Life, the Universe & Everything.
Hopefully, she will be forever remembered the ultimate oxymoron – “Islam is the most feminist of religions.”
Q.E.D.