The Australia-China relationship is in a deep freeze, and if we’re to believe the China lobby, it’s all because Malcolm Turnbull made gratuitous use of a (probably apocryphal) quote from Chairman Mao.

Turnbull’s proclamation in December that “Australia has stood up”, was so egregious that, according to the AFR, “the Chinese” were “particularly outraged” by it and regarded it as “a totally unnecessary and deliberate insult”.

Mao’s pickled body may have been turning in its mausoleum, but on Weibo (China’s souped-up version of Twitter), the reaction from regular Chinese people ranged from bemusement to mild amusement.

“People who don’t have a context for this might think Australia had been colonised by China for 200 years!” read one popular comment. “We stood up because of independence, did you [Australia] stand up because you got hemorrhoids?” read another. Yet another upvoted comment seemed to agree with Turnbull’s stance: “China has turned into what it used to hate the most”.

Whatever sympathy there is for Turnbull’s view behind China’s “Great Firewall”, former prime minister Kevin Rudd has been doing his darndest to win them over to his side through his own Weibo account on which he regularly aims both barrels at the PM in front of his 600,000+ audience.

Rudd’s latest spray, in which he accused Turnbull of punching China in the face and taking a flamethrower to Australia’s relationship with Beijing, quickly made headlines in China’s tightly controlled media, and “Lao Lu” as he’s known on Weibo, made sure his followers noticed.

But Rudd’s attempts to influence public opinion in China — even with the helpful boosting of state media outlets like The People’s Daily and Reference News (参考信息), have been floundering — either hobbled by Weibo’s censors or skewered mercilessly by the platform’s infamously acerbic users.

On February 26, Rudd posted a screenshot of the first paragraph of his op-ed in The Australian (“Australia’s top-selling newspaper” he notes parenthetically) from a couple of days earlier. With no link to the original op-ed, Rudd instead summarised its contents for his followers.

“China is one of our most important partners, but the Australian Prime Minister, Mr Malcolm Turnbull (who’ll soon be called Cold War-mongering Chairman Mal) has a China policy that’s chaotic and two-faced. This is not only irresponsible, it could have serious consequences.”

Ironically, it was Rudd’s use of the word “Chairman” that probably triggered Weibo’s censorship algorithm, resulting in comments under the post being disabled.

The next day, Rudd tried again, sharing a sanitised version of the “Chairman Mal” op-ed that Reference News had stripped of its most sensitive barbs. The article, Rudd told his Chinese audience, “criticises the current Australian government as well as Turnbull’s two-faced mess of a China policy”.

Other recent attempts to ingratiate himself with his Chinese audience have fallen flat. On October 29 2017, Rudd, in full school prefect mode, posted a photo of himself studiously examining Chairman Xi Jinping’s report to 19th CPC National Congress.

“China has entered a new age,” he wrote, only to have the censors throttle any space for discussion under the post. 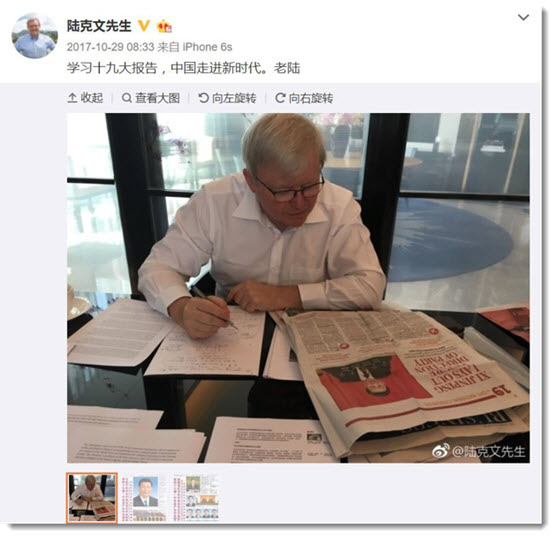 One wonders what Rudd’s followers would have commented had they been allowed. Presumably, Rudd doesn’t have a problem with the message his post sent — he is, after all, undertaking a DPhil on Xi Jinping’s “worldview” at Oxford University — but the optics of a former Australian prime minister, pen-in-hand, diligently studying “Xi Jinping Thought” leaves much to be desired.

On April 12, Rudd — not for the first time — took aim at the US’ crumbling infrastructure. “The infrastructure in this country is really underwhelming, it’s like a third-world country,” he wrote after he was forced to sit on his suitcase to wait for a late train in an NYC subway. 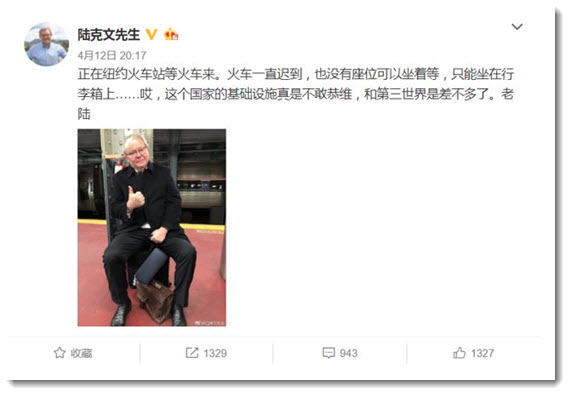 The most liked comments under the post lampooned the clumsy attempt to throw red meat to his Chinese readers — hinting that he’s the kind of politician who says one thing to one audience on Weibo, and another to his audience on Twitter.

“He’s the kind of person who touts himself as a bridge between China and the West, but serves up populist nonsense to both sides,” read one popular comment. “He’s actually just a typical double-dealing politician.” 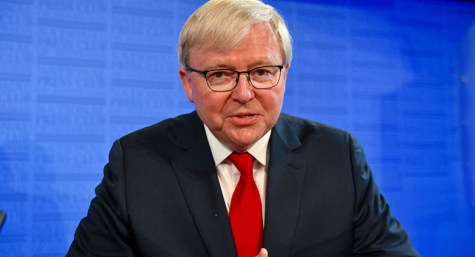 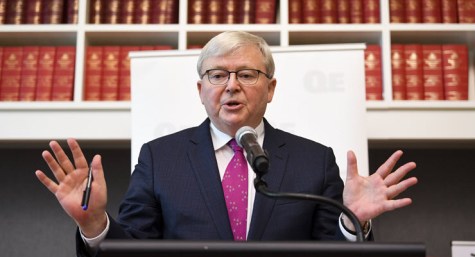 Give it a rest!
I guarantee Rudd knows more about Australia-China relations than you do…he is consistently sought out for comment overseas.
It is just drongos like you and most Australians who don’t know this…get over it!!

I’m aware he is ‘sort for comment” but of what value is his any of his commentary?. He’s critical of the current Australian government as he was his own government, thus ensuring its demise.
He is a egotist who represents Kevin Rudd’s interests first and foremost, he always has.

Agreed. Kevin Rudd, for all his human flaws, knows a great deal more about China than most of us out West. His commentary is useful.

“None Dare Call It Treason”?
If this is not a perfect example of trahison des clercs aka gRundle’s ‘knowledge/policy’ class not knowing its collective arse from a hole in the ground then I’ll take vanilla.